Consistency between the Quran and modern science –I 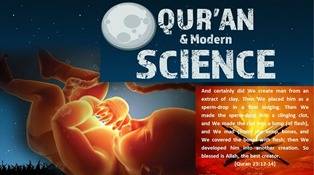 These theories involve a lot of very sophisticated mathematics for a full understanding. Basically, they concern the laws of motion under high speeds approaching the speed of light (special relativity) and the impact of strong gravitational fields (general relativity) applied to the explanation of cosmological phenomena. What is a wonder and an indication of the universality of Islam is that several of the key scientific findings in modern cosmology, according to some scientists, seem to be reflected in the Noble Quran, revealed by Allah to the Prophet Muhammad

These findings are: (a) the 'big bang theory' of how the universe began; (b) the expansion of the universe and (c) relativity of time.

The Big Bang Theory and the Unity of Creation

Most cosmologists today have accepted the Big Bang Theory in describing the origin of the universe. This theory states that the universe began at a single hot, dense point, or 'singularity'. Out of this point developed what is often referred to as 'cosmic soup', a constant interchange between matter and energy with no separation between stars and planets or the heavens and the Earth as we recognise them.

The Noble Quran appears to be consistent with this theory; Allah Says (what means): "Have those who disbelieved not considered that the heavens and the earth were a joined entity, and We separated them..." [Quran 21:30] This verse clearly describes the initial unity of all creation and subsequent division of the universe into the phenomena we observe. Abdullah Yusuf Ali, in the notes to his English translation of the twenty first Quranic chapter, points out, that as man acquires more knowledge about the physical world, he is also bound to expand his awareness of the overriding unity in the cosmos. As an example, he cites the discovery of the direct correlation between measurements of sunspot activity and changes in the Earth’s magnetic field. There are many other examples in our daily life, including the influence of the moon on the tides and women's monthly cycle, the influence of the Earth’s magnetic field on the migration of birds, gravitational and centrifugal forces that keep the solar system bound together in harmony, preventing planets from flying away and crashing into each other.

In essence, the initial unity of creation continues to exist, not in the form of a singularity, but through various bonding relationships that allow multiple forms of creation to maintain their linkage to the initial 'oneness' of the universe.

The Expansion and Structure of the Universe

The Quran points to the continued expansion of the universe in the verse (which means): "And the heaven We constructed with strength, and indeed, We are [its] expander." [Quran 51:47] In 1929, American astronomer Edwin Hubble discovered that the farther a galaxy was from the Earth, the greater the speed of its outward movement. In fact, he found the movement of a galaxy to be directly proportional to its distance. This means that if a galaxy is ten times as far away as another galaxy, it is moving at ten times the speed.

Based on this discovery, and other observations, scientists have concluded that the universe is expanding. Furthermore, Dr. Haruk Nurbaki, in his book 'Verses of the Koran and Facts of Science', states that the Quran also suggests a structure of the universe which corresponds to modern scientific findings. The Quran states (what means): "[It is Allah] who created the seven heavens in layers." [Quran 67: 3]
Dr. Nurbaki correlates the reference to the seven heavens with the descriptions of cosmic regions by modern scientists. He states that when one looks at space from Earth, he is surrounded by seven magnetic fields extending into the infinity of space. These fields consist of (i) the spatial field occupied by Earth and the rest of the solar system; (ii) the spatial field of the Earth’s galaxy, the Milky Way; (iii) the spatial field occupied by a 'local cluster' of galaxies to which the Milky Way belongs; (iv) the central magnetic field of the universe represented by a collectivity of clustered galaxies; (v) the band represented by quasars, which serve as 'star hatcheries'; (vi) the field of the expanding universe, represented by the receding galaxies; and (vii) the outermost field of space representing infinity.

The Relativity of Time

Dr. Mansour Hassab-Elnaby, in a paper entitled: 'A New Astronomical Quranic Method for the Determination of the Greatest Speed C', asserts that the Quran establishes a time/space reference system, which is indicative of the relativity of time and the constancy of the speed of light (represented by 'C' in scientific notation). Albert Einstein used these concepts to establish his well-known 'field equations' which provide the mathematical explanation for the interaction of matter, energy, space and time in the universe. The basis of Dr. Hassab-Elnaby’s paper is the Quranic verse (which means): "He arranges [each] matter from the heaven to the earth; then it will ascend to Him in a Day, the extent of which is a thousand years of those which you count." [Quran 32:5]

Thus, the Quran suggests that time is not absolute in the universe, a discovery made only in the early part of the twentieth century. The abovementioned Quranic verse, according to Dr. Hassab-Elnaby, implies a 'cosmic affair' of extremely high speed, making it possible to travel, in one day, the distance the moon travels around the Earth over a period of 1,000 years. The use of the lunar calendar in reckoning Earth time is explicitly stated in the following verse (which means):"…[It is Allah who made] the moon a derived light and determined for it phases – that you may know the number of years and account [of time]…" [Quran 10:5]

Furthermore, Dr. Hassab-Elnaby uses the mathematical relationship given in this verse – one day of 'cosmic reckoning' equal to a thousand years of 'Earth reckoning' – along with established scientific data on the movements of the Earth and the moon to calculate the speed which provides a linkage between the two systems of reckoning time. The resulting speed, he points out, is 299,792.458 kilometres per second, which is exactly, to the decimal point, the speed of light recorded by the United States National Bureau of Standards.
The Quran as Part of Universal Order

The correlation between the findings of science in the past century and the Quran highlights the importance of preserving the written word, emphasised in Islam because it bridges space and time, providing inspiration and verification for those separated from direct contact with the Prophet Muhammad

. It has also led some scientists to take a closer look at the Quran.

Dr. Maurice Bucaille of the French Academy of Science, author of 'The Bible, the Koran and Science', states that "…It comes as no surprise to learn that religion and science have always been considered to be twin sisters by Islam and that today, at a time when science has taken such great strides, they continue to be associated. Furthermore, certain scientific data are used for a better understanding of the Quranic text. What is more, in a century where for many scientific truth has dealt a deathblow to religious belief, it is precisely the discoveries of science that, in an objective examination of the Islamic Revelation, have highlighted the supernatural character of certain aspects of the revelation." Islam encourages man’s search for knowledge to both enhance appreciation of the cosmic order and augment his capability to serve as a representative of Allah in governing the affairs of the Earth. The Quran seems to call attention to the importance of observing the heavens in this search. It states (what means): "And We made the sky a protected ceiling, but they, from its signs, turned away." [Quran 21:32]
Thus, important evidence seems to be emerging in the modern world that the Quran contains revelation which transcends space and time, forming a part of the cosmic order to guide the path of mankind and strengthen the bond between religion and science.

Consistency between the Quran and modern science -II

The collection and compilation of the Quran

The importance of Tajweed

The collection and compilation of the Quran