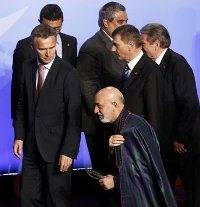 Following in the rich history of fake endings to wars during the Obama Administration’s first term, the US and other NATO member nations are loudly hyping their endorsement of a transition pact, which is being presented as an “irreversible pullout” of occupation forces.

“We are now unified to responsibly wind down the war in Afghanistan,” insisted President Obama. The pact pledges to see a transition to Afghanistan taking a “leading role” by summer of 2013. This is a great way to brand the war, since polls show massive majorities of voters in virtually every NATO notion overwhelmingly opposed to the conflict.

But despite the hype, the pact is materially no different from the one that came out of the Lisbon summit, which seeks to declare the war “over” at the end of 2014 but keep large but unspecified numbers of NATO troops occupying the nation in the nation long beyond that “end.”

But if the Lisbon language was misleading, the Chicago language is a deliberate scam, as President Obama was in Afghanistan earlier this month signing a deal to keep US ground troops in the nation through 2024.
NATO has already been throwing out bogus claims of Afghanistan taking a “leading role” in operations for months, even when Afghan forces aren’t even informed of a NATO operation, as a way of claiming some cover when the attacks go wrong.

The claim of ending combat operations is also disingenuous, with officials openly talking about the post-2014 “non-combat” troops continuing to launch “anti-terror” raids, which is materially all they’re doing to begin with.

Various leaders, including Afghanistan's President Hamid Karzai (C, bottom), disperse after posing for a picture following a meeting between NATO leaders on Afghanistan at the NATO Summit in Chicago, May 21, 2012.