Bribery Leads to Corruption and Destruction 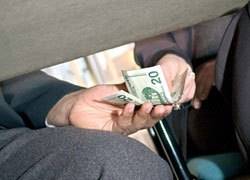 If bribery spreads throughout a society, it will undoubtedly be corrupt and doomed to destruction. Man undertook the Trust that was offered to the heavens and the earth but they refused to bear it. Hence, it is obligatory on man to observe this Trust in the most perfect way that is required of him in order to win the pleasure of Allah the Almighty and reform society.

However, if the Trust is lost, it results in the corruption of the society and it becomes disordered and disunited. To preserve this trust, Allah the Almighty forbids His slaves from doing anything that could lead to its loss or decrease. Hence, Allah the Almighty has prohibited bribery, which is spending money so as to reach something that is unlawful, either through giving the briber what he is not entitled to have or exempting him from what is obligatory on him. Allah the Almighty Says (what means):

{And do not consume one another's wealth unjustly or send it [in bribery] to the rulers in order that [they might aid] you [to] consume a portion of the wealth of the people in sin, while you know [it is unlawful]} [Quran 2:188]

It mentioned again in the context of dispraising the Jews. Allah Says (what means): {Devourers of [what is] unlawful} [Quran 5:42]

said in his commentary on the aforementioned verse.

Bribery is a grave major sin

Some scholars consider bribery to be a grave major sin, especially if paid to affect the judgment of a person in a position of trust. This is supported by a Hadeeth on the authority of ‘Abdullah ibn ‘Amr

who said, “The Messenger of Allah

cursed both the briber and the bribed person.” [At-Tirmithi] This Hadeeth indicates that bribery is a grave major sin because it is known that only grave sins and evildoings deserve to be cursed.

Nowadays, bribery prevails in many sectors of numerous societies, to the extent that there is almost no area of life that is free from bribery, especially in third world countries. There is bribery in judgment such that the judge takes the side of the undeserving or prevents someone from having his right, gives precedence to the one who does not deserve to be preferred and vice versa, or is partial in his judgment to a relative or someone of high status - due to an unlawful bribe that he received. There is also bribery in implementing judgment. There is bribery in appointing people when someone pays a bribe to those who are in authority to appoint someone while there are others who are more deserving of the job than him.

Leaving aside the fact that this is unlawful and the consumption of what is unlawful, it is also betrayal of the Trust because the better and the more efficient person should be appointed to the job. Allah the Almighty Says (what means): {Indeed, the best one you can hire is the strong and the trustworthy.} [Quran 28:26] Moreover, there is bribery in the field of education, construction and many other fields that are too numerous to mention here.

Effects and harms of bribery

Bribery is a crime that has grave effects and serious consequences on the individual and the society. We shall summarize some of them as follows:

1- Entrusting a mission to those who are not qualified to do it: When one pays a bribe to have a job that he is not qualified for, this leads to shortcomings in his work output and production and leads to the wasting of resources.

2- Destruction of principles and good morals: The spread of bribery in a society means the destruction of the morals of the members of this society, loss of confidence between them and the spread of bad morals like negligence, indifference, losing a sense of allegiance and belonging and the onset of frustration.

3- Wasting property and endangering souls: If one imagines that bribery prevails in a society until it reaches the sector of health and the production of medicine, what would be the condition of people’s health when they use bad medicines that were licensed through bribery? Imagine that one walks across a bridge that has grave defects that endangers people’s lives and properties and that the contractor who built it obtained permission to finish the work and construction through bribery.

How many casualties and financial losses would stem from the fall of that bridge? One should draw an analogy to this case in all fields. Hence, bribery leads to the wasting of money and endangering of souls.

The difference between bribes and gifts

There is no doubt that there is a resemblance between a bribe and a gift but the main difference between them lies in the intention and motive behind each of them, for the one who presents a gift seeks to win the love of others and their acquaintance and to show kindness to them.

Is a gift presented to a ruler considered a bribe?

Many scholars are of the opinion that the ruler’s acceptance of gifts is a type of bribe. In a Hadeeth on the authority of Abu Humayd As-Sa'idi

employed a man from the tribe of Al-Azd named Ibn Al-Lutbiyyah to be a Zakah [obligatory charity] collector. When he returned he said [to the Prophet

], “This is for you and this was presented to me as a gift.” The Messenger of Allah

then rose to the pulpit and praised Allah the Almighty and extolled Him. Then he

said: “I employ a man to do a job and he comes and says this is for you and this was presented to me as a gift? Why did he not remain in the house of his father, or the house of his mother, and see whether gifts would be given to him or not? By Allah, if any one of you took anything unlawfully, he will come with it on the Day of Resurrection, carrying it on [his back]. I will not recognize any of you on the Day of Resurrection with a grunting camel, or a bellowing cow, or a bleating ewe.” Then he

raised his hands till we could see the whiteness of his armpits. Then he

said twice, “O Allah! Have I conveyed [Your Commands]?” [Al-Bukhari and Muslim]

said, “This Hadeeth clarifies that the gifts received by governors are unlawful to receive and an unfaithful act because it is a breach of their trust. The Messenger of Allah

clarified in the same Hadeeth why those who are in a position of trust are not permitted to accept gifts, unlike those who are not in the same position for in their case a gift is recommended. All that the governor receives under the name of gifts should be returned to the one who gave it. If it is not possible, it should be paid to the Muslims’ Treasury.”

said, “The gifts of the governors should be put in the Muslim Treasury. The governor cannot own it unless the Imam requests it for him.”

What is the ruling on the one compelled to pay a bribe?

What should one do if it is decided that the gifts that are presented to officials are a type of bribe, but the whole society is controlled by bribery and the governing regime is so corrupt that he cannot have his right without paying a bribe?

Scholars decided that in this case only, the bribed person is the one who bears the guilt, whereas the one who gives the bribe is free from liability. This is so if he does this to have his right or to ward off some harm that may afflict him, his religion or his property.

Therefore, if scholars issue a Fatwa (accredited scholars’ interpretation or opinion regarding with Islamic laws and rulings) about the permissibility of paying a bribe in case of compulsion and state that the person who pays the bribe would not be held guilty, does this not indicate that a bribe is like stealing? Rather, it is worse because it ruins the consciousness of those in authority and drives them to wrong others for the sake of the briber. At this point, the regime will become corrupt and will be like a toy in the hands of criminals and unjust people who follow their fancies and possess money that they can pay to those who possess authority and public positions.