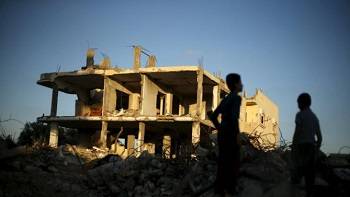 According to an article written in Days of Palestine, an Israeli soldier has given his account of the events that occurred during the attacks on Gaza in July 2014.

Known as Operation Protective Edge, the soldier described how they were ordered by their unit commander and were free to shoot, in order to take revenge for the killing of a soldier in their unit.

Israeli soldier Arieh, 20, said: “I was called to service early on July 2014 and was deployed to the Gaza Strip but until that time the operation [Operation Protective Edge] was not announced yet.

“Only some soldiers speculated that there will be war, but later our commander told us to imagine a 200 meter radius and to immediately shoot anything moving inside this circle.”

He emphasized that: “We bombed civilian targets for entertainment,” noting “one day at about 8am we went to the Al-Bureij; a densely populated refugee camp in central Gaza, and the commander told us to select a random target and shoot it.

“At the time we did not see any Hamas fighters, no one shot at us, but the commander told us jokingly: ‘We have to send Bureij a morning greeting from the Israeli army.’”

“I remember that one day, a soldier from our unit was killed and our commander asked us for revenge so I drew the tank randomly towards a huge white residential building, just four kilometers away from us and fired a shell at the 11th floor. I must have killed civilians who were absolutely innocent,” he continued.

The soldier explained how their main objective was to obliterate not just Hamas but Gaza as much as possible, including their infrastructure. He said that “We entered the Gaza Strip on July 19, 2014 to search for Hamas’s tunnels between Gaza and ‘Israel,’ but our goal was to destroy Hamas and the Gaza Strip’s infrastructure.”

“We destroyed many Palestinian buildings, farms and electricity poles. They told us that ‘we must avoid civilian casualties as much as possible’, but how could you do that when they ask you to leave behind so much destruction,”

“I can confirm that we only saw civilians, we did not see any Hamas fighters. We knew they moved through tunnels.”

Silence, an Israeli organization established by former IDF soldiers who collect and provide testimonies during their military service in the West Bank, Gaza Strip and East Jerusalem since the Second Intifada.

Palestinian boys play next to houses destroyed during the 50-day war last summer, in the east of Gaza City May 4, 2015.