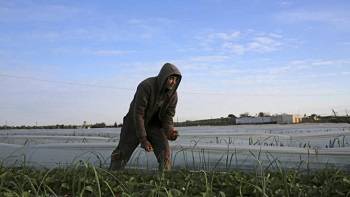 On January 7, a low-flying agricultural aircraft sprayed herbicides onto Palestinian farmlands along the eastern border, eradicating or damaging up to 162 hectares of crops and farmland along the Israeli border fence.

"Herbicides are sprayed in high concentrations. Thus, they remain embedded in the soil, and then find their way to the water basin. This constitutes a real hazard for the population," said Anwar Abu Assi, manager of the chemical laboratory at the Ministry of Agriculture.

The zone, which amounts to an estimated 17 percent of the entire territory of the Gaza Strip and a third of its agricultural lands, erodes into the Strip's most vital and fertile soils.

Yousef Shahin, 40, was having enough trouble sustaining his farmland when, last week, an Israeli raid targeted the water tank that supplied his farm and neighbouring farms in the al-Faraheen area east of Khan Younis.

The tank and collection system had cost Shahin and his neighbors some $15,000. Shahin said governmental support was lacking." Without support, we can never reconstruct the system again. We don't have running water for irrigation; I think we lost this season."

The Israeli army's move had added another element to the suffering of Shahin and his fellow farmers.

With the Strip being merely five kilometers wide in some areas, few hundred metres prove essential to the Strip's food security. Over the last few months, Israeli soldiers had killed at least 16 Palestinians who entered the zone, most of them protesters who were shot at by snipers while participating in demonstrations near the fence.

Furthermore, scores of casualties have been reported among farmers who were merely tending to or approaching their lands. "We had to jeopardize our lives daily growing these crops; now all our efforts are in vain," explained Shahin while examining a new implant of spinach.

He lost crops that included spinach, peas, parsley and beans. Whether or not his new endeavours to cultivate will succeed remains unknown.

Farmers confirm that the damages of the latest spraying extend beyond the so-called "buffer zone", as the winds carried the chemicals further inside the Strip. They also fear consequences of such materials may affect their lands in the long run.

Abu Assi explained that each herbicide or pesticide has a safety period that needs to be observed before attempting to grow new crops. At such high concentrations, he fears the lands are likely to constitute a hazard for a long time.

During the 2014 Israeli war on Gaza, the agricultural sector sustained losses and damages of up to $550m. 14,000 hectares were razed and destroyed; thousands more of hectares of crops were lost because farmers were unable to reach their lands amid the fighting.

The occupation extracts a steep price from farmers and fishermen in Gaza.

The station developed new seeds and strains for use by local farmers. Bombed and completely destroyed during the 2014 war, Israel seems insistent on keeping the station out of service, effectively stifling every Palestinian attempt for self-sufficiency or independence, even agriculturally.

The station's manager, Shaher al-Rifi, says the facility is currently 70 percent out of service. With the Israeli restrictions on imports of tractors and agricultural machinery, it is likely to remain so for a long time to come.

Adel Atallah, a general director at the agriculture ministry, explains that the whole agricultural sector has for years been running on old machines. "Domestic farmers face problems trying to replenish anything that goes out of service. What isn't banned is stalled at the crossings by Israel."

The troubles facing the agricultural sector in Gaza span a wide myriad of difficulties. Irrigation is disturbed by the continuous power interruptions, which sometimes last more than 12 hours a day. Farmers depend on power generators to pump water, and the costs of fuel add another factor to their economic vulnerability.