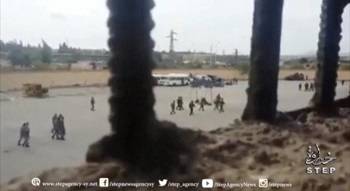 More than 60,000 people have been killed through torture or died in dire humanitarian conditions inside Syrian regime prisons throughout the country's five-year uprising, according to a monitor.

The numbers were obtained from Syrian regime sources, the United Kingdom-based Syrian Observatory for Human Rights said on Saturday.

"Since March 2011, at least 60,000 people lost their lives to torture or to horrible conditions, notably the lack of medication or food, in regime prisons," said the Observatory's Rami Abdel Rahman.

Though the Syrian conflict started with popular protests against Syrian President Bashar al-Assad, it quickly became a war between the regime and opposition groups.

Staffan de Mistura, the United Nations special envoy to Syria, recently estimated that 400,000 people had died throughout the last five years. The number was his personal estimate and not an official UN statistic.

'No progress on detainees'

Calculating a precise death toll is impossible, partially due to the forced disappearances of tens of thousands of Syrians whose fates remain unknown.

Explaining that HRW cannot verify the Observatory's statistics, Houry told Al Jazeera: "We have known how bad the situation is in the detention facilities for a long time and that many people have died inside."

In a report published in December, HRW concluded that the Caesar photographs - a photo cache documenting the deaths of more than 28,000 deaths in regime custody which was smuggled out of the country - suggested that the regime had carried out crimes against humanity.

"There has been no progress on detainees," Houry said. "The entire world saw the large scale detention and death in the Ceasar photos, and despite all of this, there was no reaction."

The International Syria Support Group - the 17-country coalition that includes the United States and Russia - released a statement on Tuesday that urged the UN special envoy de Mistura to negotiate the release of detainees in regime custody, as well as those held by armed groups.

Houry added: "Detainees deserve the same level of attention from the high level political actors, like the US and Russia, as all the other issues. It has been going on for too long and with too high a cost."

A still image taken from a video uploaded on a social media website shows what it says are regime security forces walking outside Hama prison, Syria, May 7, 2016 after a revolt by its inmates. Social Media Website/Handout via Reuters TV