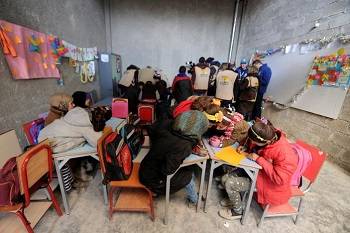 In Aleppo's Jibreen shelter, home to refugees who have been unable or unwilling to return to their houses or flee further afield, the inhabitants of Qalayah, one of the villages from that area, swear they will one day recover their land.

"We raised sheep and had land. We sold everything when we left. God willing we shall return. It's our village, we can't leave it," said a lean man in his 40s, traditional headdress worn over a long robe, who identified himself as Abu Mohammed.

Syria's "beehive villages", so-called for the distinctive conical shapes of their mud houses, have long attracted the attention of outsiders, but many have been deserted during the waves of war that have rolled across the country.

The plight of Syria's rural districts has received less attention than that of its bomb-shattered cities. But with their wealth tied up in livestock or land, village folk are often less able to start afresh when forced to new surroundings.

The Syrian regime army captured the last opposition enclave in east Aleppo in December after months of siege and years of intense bombardment.

In Jibreen, the villagers now live in a freezing industrial zone where large puddles in the muddy streets were iced over even at midday during a recent visit, and toddlers in bare feet chased chickens between warehouses.

In Rasm al-Nafl, bullet holes scarred the walls and spent cartridges littered the ground. In a courtyard next to a mud house with collapsed roof, an orange jumper lay embedded in the mud and rubble along with a pair of silver high-heeled shoes.

Nearby lay a worn stone pillar that appeared to be from a much earlier period and pointed towards the rich history of even the arid parts of a region that has been home to some of the world's great empires and civilizations.

In this and other villages on the road, the only occupants were Syrian regime soldiers, warming their hands around fires and watching tanks and other armored vehicles roll past their bivouacs, where washing hung from hut doorways.

According to Abu Mohammed, the people of Rasm al-Nafl moved deeper into terrain when the fighting neared in search of pasture for their herds.

Children Suffering the Most

The hardship is worst for their children, who are only now able to attend school in a center administered by UNHCR, the United Nations' refugee agency, and run by a Syrian charity that operates in regime-held areas.

Teachers at the school, which also serves refugees from parts of east Aleppo rendered uninhabitable by the fighting and are now living in Jibreen, said some of the children had had no formal education for years.

They live in rows of warehouses, each about 150 meters (yards) long and divided into 30 units. Between them, families sat in the sun, bundled up with blankets, and two men rode a horse-drawn cart carrying plastic sacks of firewood to sell.

In a classroom run by the Syrian Society for Social Development, about 30 children crammed onto a few benches, with some of the pictures they had drawn affixed to a concrete wall behind them.

When they arrived at Jibreen after years of war, many of them having lived in the opposition-held eastern Aleppo zone that was fiercely bombarded during the fighting, they were very aggressive, said Reem Ward, one of the charity workers.

"They wouldn't stop hitting each other," she said, but had since grown more peaceful.

While the younger children from Qalayah are at school, the older ones work in factories from the age of 13 or 14, according to Abu Mohammed. The boys leave to do military service a few years later.

Beyond Rasm al-Nafl, on the west side of Jaboul lake where a beautiful plump white bird waded in the salty water, pastoral life has returned as military conflict has abated, with shepherds grazing their flocks near mud villages.

But a return to damaged villages is not easy. Although the people said they still have the skills to mend or rebuild their distinctive beehive houses, they have sold all their sheep and long ago used the money for daily expenses.