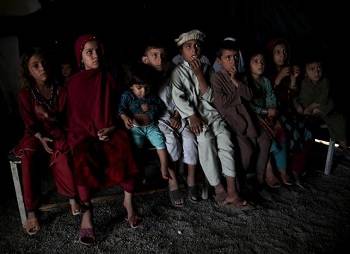 Torkham is a maze of chain-link fences and razor wire. Stern-faced Pakistani guards, their rifles loaded and at the ready, watch on as Afghan visitors quietly circumnavigate the multiple checks of their papers at the main border crossing between the two South Asian countries.

Nearby, a group of about two dozen children watch on, as they await an uncertain future and possible deportation under a newly instituted regime of strict Pakistani rules governing the entry of Afghan nationals across this border.

It was not always like this. For decades, the Pakistan-Afghan border was virtually open, with tens of thousands crossing in each direction each day to visit relatives or seek work without requiring passport or visa.

Since 1979, millions of Afghans have used this border crossing to seek refuge from war and violence in their country. They fled the Soviet invasion in 1979, then the Taliban's excesses in the 1990s, and, finally, the 2001 US-led invasion of their country in 2001, and the chaos that followed.

Today, there are 1.32 million registered Afghan refugees still in Pakistan , along with an estimated more than a million undocumented others.

The relationship between the two countries soured in the wake of the deadly clashes. Pakistan has tightened border restrictions and, rights groups and refugees allege , begun cracking down on refugees, forcing them to return home.

Last year, at least 606,905 registered and undocumented refugees repatriated back to Afghanistan from Pakistan, according to figures from the UN High Commissioner for Refugees ( UNHCR ) and the International Organisation for Migration (IOM).

By comparison, that is roughly double the number of refugees that fled war in Syria , Iraq and Libya to reach Europe by boat across the Mediterranean Sea in the same period, according to UNHCR.

In terms of registered refugees, the increase from the previous year is staggering: it is the highest number of repatriations since 2005, with the numbers rising more than six-fold compared to 2015, when only 58,211 Afghan refugees repatriated.

"The refugees are the ones who are sacrificing, and being sacrificed, because of these tensions between the Afghan and Pakistani governments," says Shahzada Khan, an Afghan refugee who fled the Soviet war in the 1980s as a 14-year-old boy, and has lived more than half his life in Pakistan.

Khan's face is gaunt, the wrinkles and lines from a difficult life make him appear far older than his current age of 49 years. The dirt lanes of the Turkmen Refugee camp, about 90km from Torkham, where he lives were once bustling with activity, home to more than 25,000 refugees. Now, they are lined with abandoned mud-and-stone homes.

There are now only about 3,500 people left here, and Khan, who has run the camp for 22 years, does not know how long they will be able to stay, with the new restrictions forcing them to obtain passports and visas to cross the border to visit relatives, and under an increasing campaign of police harassment and abuses.

"In the last year and a half, I have seen and heard more stories of harassment than I have heard in the last 35 years," he says. "When we would have a death in the family, we would take the body ourselves across the border. Now, we have to send it in a box, like it is a cargo."

Echoing Khan's words, Abdul Rehman, 54, another refugee who lives at the camp, says this is not what he expected from his life here when he crossed the border on a donkey cart, fleeing clashes between the Taliban and the Russian-backed Communist government in 1992 in his native Jawzjan province.

"We didn't come here out of hunger, seeking food," he says. "The mujahideen would come there to kill us, and then the government forces would come, too … there was a danger to our lives, property and honour. We just took the clothes on our backs and fled."

In the 25 years since, Rehman has lived mostly in refugee camps across Pakistan's northwest, currently earning his living working at a brick kiln for about $10 a day. His four children are all born in Pakistan and have gone to school here.

Asked what kind of future he sees for them, if the family is forced to leave, his answer is simple:

Afghan-Pakistan relations have further deteriorated as Pakistan's government has often linked Afghan refugees to bombings and other violence perpetrated by the Pakistani Taliban ( TTP ) and its allies.

Since February 13, more than 120 people have been killed in a wave of violence that has gripped Pakistan, including 88 at the bombing of a Sufi shrine in southern Sindh province.

In separate statements, Pakistan's Foreign Office and military demanded the Afghan government act against alleged Pakistani Taliban sanctuaries on its soil, and sealed all border crossings, including the one at Torkham.

Security forces launched a slew of operations across the country, arresting hundreds, including scores of Afghan refugees, and issuing shoot-on-sight orders for anyone attempting to cross the border.

Refugees, however, deny involvement in attacks and say they are being made scapegoats.

"We feel like after an attack … we can't leave our houses out of fear, that God forbid the police could pick us up as a suspect," says Hafiz Ahmed, Khan's 22-year-old son.
WATCH: Chaos at Afghanistan-Pakistan border as second crossing closed (1:56)

A recent Human Rights Watch research report documented what the US-based rights group called "a campaign of abuses and threats", starting in 2015, aimed at driving out Afghan refugees . The report documented cases of arbitrary detentions, raids on refugee homes and confiscation of documents, among other allegations, by Pakistan's police, ostensibly in order to pressure the refugees to leave.

Pakistani officials denied the charges, saying there was no such policy of targeting Afghans.

"Notwithstanding any isolated or individual incidents, there is no policy of coercion on part of Government of Pakistan," said a statement released by Pakistan's Foreign Office in response to the report.

"The Government also remains mindful of its responsibility to ensure security and vigil against suspicious elements, unlawful activities and the menace of terrorism, including through improved and regulated border management."

In February, the government extended a deadline for Afghan refugees to leave the country from March 31 to December 31, 2017. The government says it is formulating a new refugee policy, but Pakistani officials declined to comment when asked specifics of the proposals being discussed.

"There were never any directions from any government, either federal or provincial, that police are to have a role in repatriation," says Muhammad Tahir, a senior police officer in Khyber Pakhtunkhwa province, where most Afghan refugees live.

Refugees Al Jazeera spoke to, however, disagreed, offering examples of harassment and arrests by police suffered either personally or by family members in at least 10 extensive interviews.

"They have been harassing us and arresting people ever since the Sehwan Sharif [shrine] attack," says Khan Muhammad Babar, an Afghan refugee who lives in the town of Nowshera.

"They are saying that even if they have [registration] cards, that is not enough, that they have orders from above!"

Shahzada Khan grows animated when asked about whether there are those in the refugee community who aid attacks in Pakistan.

"This is totally wrong! Those refugees who live in Pakistan, we accept Pakistan's law and constitution, we accept the police. We have never been involved in terrorism, and never will," he says, visibly shaking with rage.

The numbers tend to bear Khan's contention out. According to data from the Khyber Pakhtunkhwa prosecutor's office, refugees were found to be involved in only 1.27 percent of all violent crime since 2014.

"We did not want to fight. I was 14 years old [when I came here]. We just wanted peace and security. What does war ever achieve?" asks Khan.

INSIDE STORY: Why is Pakistan forcing Afghan refugees back home? (24:59)

Khan's own son, Hafiz, is not much older than he was then. Currently studying to be a lab technician, he says he knows little of Afghanistan , and only wants to be allowed a path to Pakistani citizenship.

"I feel like a Pakistani. Because I was born here. My friends are here. I love this place, so much so that I cannot tell you, [but now] I am made to feel guilty all the time."

That is a concern echoed by many young Afghans refugees born in Pakistan, of being caught between identities, rejected by the land they have thought of as home for decades.

"Basically, I feel I am from Afghanistan because people here do not accept me," says Niazullah, 27, a student at Peshawar University whose family fled Afghanistan's Logar province in 1979, well before he was born. "I am forced to feel that I am from Afghanistan, […] to not think of myself as Pakistani."

In recent days, Afghan students at Peshawar University say a campaign of harassment has gathered steam in their classrooms. It is expressed in the form of a question, found scrawled in the dust on car windows, yelled at them in the library, or even jokingly directed at them when they ask a tricky question in class.

"Kala bazai?" they ask, meaning "When will you leave?"

"This really hurts me, as a human being," says Niazullah, of how on his first day at the university, as he introduced himself to the class, that was the first question directed at him.

"It's not just about hurting our feelings - this puts you under a lot of mental pressure," interjects Khalid Amiri, 22, a fellow Afghan student. "We know that we have to come back to the classroom and meet the same students."

Cut off from one identity, students often struggle to connect with their Afghan heritage, too, argues Amiri.

"The consequences of war are not just that they displace you from your country, they also destroy you culturally and from your heritage."

In addition, many of those who have returned home complain of not being able to integrate and being rejected by their own people.

"Six months ago, my cousins were going back to Afghanistan," says Niazullah. "My cousin said that as soon as they arrived in Kabul, people started raising the cry: 'Look, the [Pakistani intelligence] agents have come!' So, in a sense, we are being humiliated here, and we're also being humiliated there."

As a result, young refugees often say they felt bereft of an identity - cut off from the one they have occupied their whole lives, unable to formulate one of a place they have never been, and rejected when they return.

"The situation that has passed here [in terms of forcing repatriation], it was no less than having a gun to our heads," says Niazullah.

"In fact, it would have been better if they just put a gun to our heads and pulled the trigger once."