Palestine: The Arab 'deal of the century' 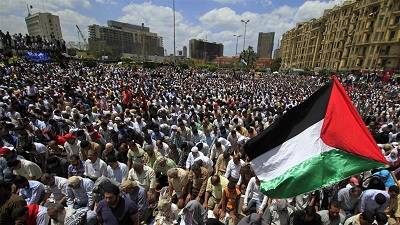 A man stands charged with biting the finger of another man during a fight. A witness for the prosecution takes the stand, and the defence lawyer asks: "Did you see my client bite off that man's finger?" "No," says the witness. "Aha," probes the smug lawyer, "How then could you be sure he did it?"

I am reminded of this story every time I hear Trump administration officials claim we cannot judge their "peace plan" or so-called "deal of the century" before it is released. But we don't need to wait. We have seen Washington spit out one hostile policy after another over the past two years that leave no doubt about its intentions to humiliate the Palestinians and the Arabs into submission.

From recognising Jerusalem as Israel's capital to closing the office of the Palestinian Liberation Organization (PLO) in Washington, to cutting aid to UNRWA - the UN agency for Palestinian refugees - and sanctioning if not encouraging Israel to annex more occupied Palestinian territories, the Trump administration is doing all it can to bestow international legitimacy on the Israeli occupation of Palestine.

Unsurprisingly, the Palestinians have rejected what they deem as the "slap of the century" and refuse to participate in any meeting that is meant to facilitate its implementation. But why are so many Arab governments - who have repeatedly voiced their support for Palestinian national rights in a state of their own - facilitating, participating and supporting a workshop next week in Bahrain to plan and finance the implementation of a sinister deal which they haven't seen, and whose architects reject Palestinian self-determination?

The official Arab order has failed miserably in dealing with Israel since its foundation as a "Jewish state" on the ruin of the Palestinian homeland seven decades ago.

They initially tried but failed to impose a solution by force, losing one war after another. Then they tried to reach a diplomatic resolution of the Palestinian question with Israel and failed again.

For over a quarter of a century, they entrusted the United States, Israel's closest ally, with managing the "peace process", and continued betting on Washington's goodwill despite its dishonest management and utter failure to bring peace.

And today, as fanatic Zionists Jared Kushner, Jason Greenblatt, and David Friedman spearhead the Trump administration's diplomacy and boast about their total and complete acceptance of Israel's most radical policies in Palestine, all the while refusing to share the details of their plan, Arab regimes are jumping on the Trump bandwagon against the advice and pleas of their Palestinian brethren.

In other words, having failed at solving or resolving the Palestinian issue, a number of Arab regimes are today willing, grudgingly or not, to eliminate the Palestinian cause once and for all.

But why would they betray Palestinian freedom so flagrantly, so cheaply, so humiliatingly?

Well, some like the Saudi, Emirati and Bahraini leaders are enthusiastically supporting the US deal in order to clear all hurdles to a trilateral strategic Gulf alliance with the US and Israel against Iran. Others, like Jordan and Egypt, are unable to say no to their US patron for fear of isolation or retribution, especially, when the Trump administration is offering financial rewards.

But mostly, it is because the predominantly undemocratic Arab regimes are primarily motivated by self-preservation, not national unity, security and interest. Palestine is a constant reminder of their utter failure. Having lost all popular legitimacy, national credibility and regional clout, these regimes are turning to the US for support and protection. And that comes with a hefty price tag.

Thankfully, the people of the Arab world share a different sentiment and different loyalty.

The meaning of Palestine

Throughout the past century of tectonic shifts in the Arab and Muslim worlds - from colonialism to pan-Arabism to Islamism and from awakenings to revolutions to counter-revolutions - Palestine has persisted as a symbol of resistance against oppression.

Arab and other Middle Eastern leaders have used the cause of Palestine for their own narrow interests, because of its popularity with the masses. Indeed, championing the cause of Palestine and Jerusalem, even if just rhetorically, has long bestowed a degree of domestic and regional legitimacy over their rule.

For example, the Ayatollahs in Tehran and Wahabi rulers in Riyadh may disagree on everything, except public support for Palestine and Jerusalem. After the Iranian Revolution in 1979, Ayatollah Ruhollah Khomeini embraced the cause of Palestine and dedicated a special day in the Iranian calendar to celebrating al-Quds, Arabic for Jerusalem.

Similarly, over the past five decades, the Saudi rulers have sponsored various initiatives for Palestine, including in 2018 an Arab League meeting in Riyadh called the al-Quds summit - just a few months after their closest ally had recognised Jerusalem as the capital of Israel.

At the same time, those who have dared to publicly go against the Palestinian cause have paid the price with their lives: whether it is King Abdulla I of Jordan (d 1951), President Anwar el-Sadat of Egypt (d 1981) or President Bachir Gemayel of Lebanon (d 1982).

While many Arab leaders have been cunning or opportunistic in their approach to the Palestinian cause, the Arab masses have been unequivocally and unconditionally behind it - something the Trump administration is bound to learn the hard way.

Most Arabs, including Palestinians, may have never set foot in Palestine or its capital Jerusalem for the obvious reason: the Israeli occupation. But the cause of Palestine and Jerusalem transcends geography and geopolitics; it transcends even the Palestinians as a people and Palestine as a homeland.

For decades, Palestine has stood as a symbol of resistance against foreign hegemony and domination, be it British, French, or American.

In the 100 years between Britain promising a Jewish homeland in Palestine in 1917, when Jews comprised less than 10 percent of the population, and the US recognising Jerusalem as the capital of the "Jewish state", the Arab and Muslim worlds have always associated Israel's expansion at the expense of Palestine with Western domination, and resented the West for it.

This has always been a source of endless antagonism against Western powers as well as unity. Whether it is Saudis and Iranians, Afghans and Pakistanis, or Islamists and liberals - no matter what Muslims might disagree about politically or ideologically, they are certain to unite behind Palestine, which constitutes a certain degree of threat against US (and other Western) interests in the region.

Like previous forms of Palestinian resistance, the Palestinian popular uprisings have inspired solidarity marches across the Arab world. Some of the young people, who cut their teeth in those protests after the second Intifada, went on to lead the demonstrations of the Arab Spring a decade later.

Long unable to express their grievances against their rulers, the Arabs have projected their dreams and aspirations onto Palestine. Time and again the so-called Arab street has risen in solidarity with occupied Palestine and in reaction to their own internal occupation.

It is no coincidence that today, when Arab unity is in disarray, and Arab regimes are at their most repressive stage, they are also most eager to appease the US. It is also no coincidence that those who stood against the Arab Spring are rushing to normalise relations with Israel.

As the Trump administration exploits general fatigue in Arab capitals in order to dissolve the Palestinian cause once and for all, it may well reunite Palestinians, Arabs and Muslims against its Middle East policies and lackeys.

It is only a question of time for US decision-makers to regret their reckless policy towards Palestine.

Egyptians hold Palestinian flags during Friday prayers at a rally calling for the end of the Israeli occupation on Palestine, in Tahrir square in Cairo on May 13, 2011 [AP/Khalil Hamra]