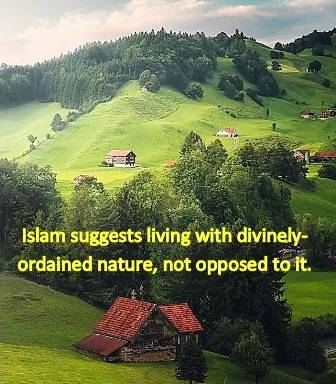 Living with and loving Allah's Creation

Let us think about some of the ways that Islam's spiritual orientation and its concrete rules for social and economic life, offer potential solutions to concrete problems that face us.

Islam asks us to submit to Allah, to bend toward our creator as a reed bends in the wind. Put in another way, this suggests we should live with divinely-ordained nature, not opposed to it. We should not strive to create radically artificial environments, but instead adapt ourselves more flexibly to the natural environments we have. Allah has made this easy for us in many ways: We have been given a lunar calendar to keep us in touch with the natural lunar rhythms, and a daily time-keeping system based on the sun, whose position is the key to the timing of the five daily. By orienting our time-frame around these divinely provided systems, we automatically move in harmony with the solar and lunar rhythms that are, according to the Quran, among the most powerful signs of Allah.

At a more mundane level, we have to ask ourselves questions like: Does living in harmony with nature mean that we should give up air conditioning? Certainly if we attain gratitude and inner peace by the grace of Allah, we will be less desperate to make every last detail of our physical existence as comfortable and luxurious as possible. Since air conditioning will always be a luxury that only a tiny percentage of the world's population will ever be able to afford, perhaps we should at least be frugal (and grateful) in our use of it, and try to use our wealth to feed our hungry fellow human beings. Likewise, we should build modestly with local, natural materials, and eat modestly with locally-grown, natural foods. We should use mechanical transport with moderation, relying as much as possible on such healthy, pollution-free, non-fossil-fuel burning means as walking and bicycling, and as little as possible on private auto-mobiles.

None of these individual actions, however, will save the planet if it continues to be dominated by ruthless exploiters. We need to become Islamic-environmental activists, organizing and agitating for both Islamic and environmental causes and showing how the two are closely linked. By demonstrating concern for our planet, and a commitment to finding solutions, we will be spreading a positive image of Islam to all. Together, the rising army of eco-warriors and the awakening Muslim Ummah (Nation) will carry the green banners of Islam and environmentalism to every corner of the planet, creating the basis for the sustainable, balanced, harmonious society of the future.

Literally "the scale of balance." The word 'Meezan' expresses the harmony of Allah's creation. It expresses the perfect equilibrium and absolute justice of creation, which humans, as successors are obliged to help maintain. Allah Says (what means): "The sun and moon revolve to a reckoning and the stars and trees bow in adoration He raised the sky and set the balance so that none may transgress against the balance." [Quran, 55:5-8] Humans must help maintain the cosmic balance by acting justly toward nature as well as toward each other. The built environment and the natural environment should be in perfect harmony, as suggested by the fact that Meezan also means, "ground design" in architecture. Traditional Islamic architecture, especially masjid architecture, harmonizes building, landscape and sky in many marvelous ways. The most famous and influential 20th century architect, Frank Lloyd Wright, drew heavily on traditional Islamic architecture as he revolutionized Western architecture. Wright refused to build the usual rectangular boxes that squat like alien presences on the landscape. Instead, he used graceful Islamic-derived forms to harmonize and balance indoors with outdoors, building with landscape, and humanity with the rest of creation.

The word "Ayah" means sign as well as Quranic verse. The first way the early Muslims recognized that the Quran is the word of Allah was due to the miraculous beauty of its verses. Likewise the Quran invites us to look at the beautiful world around us as a sign pointing to its Creator. We are meant to "read" these signs and gain ever-deeper knowledge and appreciation both of creation itself, and especially of the Creator Who set such signs before us. The Quranic revelation began with the command "iqra'", "read!" This commanded Allah's last messenger, Muhammad

to begin reading/reciting the words of Allah. It also commanded the people to whom the message was sent to become literate—and within a few generations Arabic, with the Quran as its central influence, had become the world's leading written medium of expression. Finally, at the most general level, "iqra'!" commanded all humans to "read" the book of Allah's creation to decipher its truth and beauty, which always points beyond itself toward its Creator. If we look at the world around us as an ever-shifting panorama of signs of Allah, rather than as a meaningless heap of dumb brute matter, we will contemplate it with awe and act as cautious and respectful stewards rather than hyperactive, transgressive exploiters.

The concept of Haram, whose legal meaning is "forbidden," suggests the necessity of setting limits that must not be transgressed. Traditionally the "Haram" was the intimate part of the house which was off-limits to strangers and casual visitors. Westerners, colonialists, wishing to transgress whatever limits they found in the lands they invaded, projected their own fantasies upon the private areas of the Muslim home, turning this innocent word into the salacious English word "Haram." But the original word Haram, with its implication that limits sometimes need to be drawn, is the word Western culture really needs to borrow from Islam. Among the places where limits need to be drawn, and spaces set aside, are the earth's remaining natural areas. Nature parks, game preserves, wilderness areas, and so on are absolutely essential to the future of our planet. Yet when a secular government says, "Don't transgress in this area because the law says so", many people, driven by greed or desperation, will not listen. Under an Islamic system, when an area is declared Haram, and Quranic precepts invoked to protect it, Muslims will be much more likely to sacrifice their immediate self-interest and respect the lines that must not be crossed. This is just one example of how sacred law, which touches our hearts and carries Allah's imprimatur, is more effective than secular law, which requires ever-greater armies of ever-more-corrupt police, soldiers, bureaucrats and prisons to try to enforce it. In the absence of Allah's guidance, man imagines himself self-sufficient and is driven to violate limits. Allah Says (what means): "No! (But) indeed, man transgresses, because he sees himself self-sufficient. Indeed, to your Lord is the return." [Quran 96:6-8]. When humans understand that they are not self-sufficient, but utterly helpless and dependent on a marvelously beautiful and unimaginably complex natural world—a natural world which, like us, is utterly dependent on Allah for the tiniest nanosecond or smallest subatomic particle of its existence—they will be overtaken by awe and accept the limits that sustain the balance (meezan) of Allah's creation.

Ecology and Islamic values - I 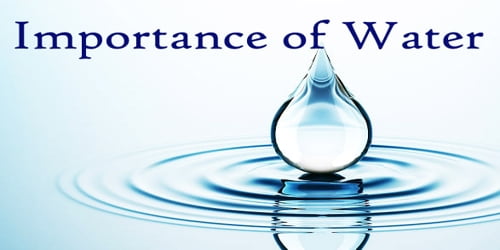 Towards Animals and Environment

Author: Dr. Raaghib As-Sirjaani Water is one of the most important environmental elements for all living creatures on earth. The great emphasis that Islam lays on proper utilization of water starts with...More