The lineage of the Prophet Muhammad-II 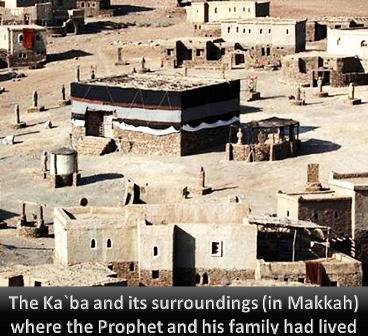 The King of Abyssinia () had captured for a very short period. During the lifetime of ‘ was under the rule of the King of Abyssinia. In those days Abrahah Ashram was the governor of on behalf of the king. He built a temple in and persuaded the Arabs to perform Hajj at the instead of the Ka'bah. However, he was not successful in his endeavor. In order to put him to disgrace, an Arab defecated in the temple to desecrate it. Abrahah grew so furious that he invaded Makkah with the intention of destroying the House of Allah -- the Ka'bah. He used elephants in his attack, so the people of Makkah called them the People of the Elephant and the year came to be known as the Year of the Elephant.

When the Quraysh came to know of the attack, they were filled with fear, as they were no match for such a large and strong army. They jointly requested their chief, ‘Abdul-Muttalib to go to Abrahah and explore a way to avert the battle. When ‘Abdul-Muttalib presented himself to Abrahah, he was greatly impressed and held him in high esteem. ‘Abdul-Muttalib stated that Abrahah's army had captured 200 camels, which belonged to him. Thereupon Abrahah remarked that he took him to be a wise person but he obviously was mistaken. He (‘Abdul-Muttalib) was aware that Abrahah had come with the sole purpose of demolishing the House of Allah — the Ka'bah. However, intentionally ignoring the topic, he only spoke of his camels instead of saving the Ka'bah.

‘Abdul-Muttalib said: " I am merely the owner of the camels, but this House also has an Owner and He will save it."

The answer enraged Abrahah and he burst out in anger saying he would see if the Lord of the House would save it. His army was destroyed and left like an empty field from which all the corn has been eaten up, and only the straw with stalks and stubble was left. The complete rout of Abrahah's forces after ‘Abdul Muttalib’s daring reply was a very significant event for , which put great fear of Allah in their hearts.

After that fateful event, the rule of went out of the hands of the Abyssinian king and Sayf Ibn Dhi Yazin captured the country. ‘Abdul-Muttalib took some nobles of Quraysh and went to congratulate Sayf on his victory. Sayf Ibn Dhi Yazin gave ‘Abdul-Muttalib glad tidings that the last Prophet would be raised from his (‘Abdul-Muttalib's) offspring. This prophecy found wide currency and fame. All the members of the delegation thought that the last Prophet would be raised from their progeny. Each of them contacted the soothsayers and monks hoping for good news but returned disappointed.

We have mentioned that ‘Abdul-Muttalib invoked Allah the Almighty that in case he was granted ten sons, he would sacrifice one of them in the name of God. ‘Abdul-Muttalib had ten sons, Al-Harith, Az-Zubayr, Abu Talib, 'Abdullah, Hamzah, Abu Lahab, Ghidaq, Maqwam, Safar and Al-'Abbas. He also had six daughters, who were Umm Al-Hakim, Barrah, 'Atikah, Safiya, Arwa and Omayma.

'Abdullah was the father of Prophet Muhammad

. His mother was Fatimah, daughter of 'Amr Ibn 'A'idh Ibn 'Imran Ibn Makhzum Ibn Yaqdha Ibn Murrah. 'Abdullah was the most handsome of ‘Abdul-Muttalib's sons, the chastest and the most loved. He was also the son whom the divination arrows pointed at, to be slaughtered as a sacrifice to Al-Ka'bah. When ‘Abdul-Muttalib had ten sons and they reached maturity, he revealed to them his secret vow which they silently and obediently accepted. Their names were written on divination arrows and given to the guardian of their most beloved goddess, Hubal.

The arrows were shuffled and drawn. An arrow showed that it was 'Abdullah to be sacrificed. ‘Abdul-Muttalib then took the boy to Al-Ka'bah with a razor to slaughter the boy. Quraysh, his uncles from Makhzoom tribe and his brother Abu Talib, however, tried to dissuade him from consummating his purpose. After much discussion they turned to Saja', a famous soothsayer. She pointed out that blood money for their (‘Abdul-Muttalib's) clan was ten camels. Thus, they should put ‘Abdullah on one side and ten camels on the other and then draw the lots.

In case the camels were chosen they would be slaughtered, but if ‘Abdullah was chosen they should add ten more camels and draw again. They should keep adding to the number of the camels until the camels were drawn. This exercise went on until the number of camels reached one hundred. ‘Abdul-Muttalib drew the lots twice more for his personal satisfaction, but each time it fill upon the camels. Hence, 100 camels were slaughtered and ‘Abdullah was saved. Since that time, the blood money of a person who was killed was fixed at one hundred camels.

‘Abdul-Muttalib chose Aminah, daughter of Wahab Ibn 'Abd Munaf Ibn Zahrah Ibn Kilab, as a wife for his son, 'Abdullah. In the light of this ancestral lineage, she stood eminent in respect of nobility of position and descent. Her father was the chief of Bani Zahrah, to whom great honor was attributed. They were married in Makkah, and soon after 'Abdullah was sent by his father to buy dates in Madeenah where he died. According to another version, 'Abdullah went to on a trade journey and died in Al-Madeenah on his way back. He was buried in the house of An-Nabigha Al-Ju'di. He was twenty-five years old when he died. Most historians state that his death was two months before the birth of Prophet Muhammad

. Some others said that his death was two months after the Prophet's birth. When Aminah was informed of her husband's death, she composed a heart-rending elegy in his memory.

The lineage of the Prophet Muhammad-I

The lineage of the Prophet Muhammad-I

The birth of the Prophet Muhammad, sallallaahu alayhi wa sallam

Arabia before the Prophet Muhammad –I

The lineage of the Prophet Muhammad-II