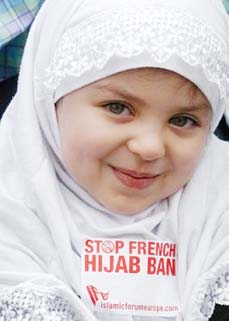 Hijab is an Arabic word that describes the Muslim woman's entire dress code, which includes a veil and whatever else is needed to cover everything except the face and hands. It is adopted at puberty - an age when, according to Islam, people become accountable for their actions.

This essay will attempt to briefly enumerate the basic requirements regarding the Hijab as stipulated by the Sharee’ah (Islamic Law). The term Hijab includes not only dress and the covering of the body, but also the methods of behaviour that one has before members of the same and/or opposite sex, promoting privacy for females and prohibiting loose intermingling between males and females; it is, therefore, an encouragement of modesty, decency, and chastity.

The following requirements represent the ones agreed upon by the overwhelming majority of Islamic scholars and are all solidly backed by firm evidence taken from the Quran, the Sunnah (Prophetic traditions) and the practice of the Companions of the Prophet .

1. The Extent of Covering

The dress worn in public must cover the entire body except what has been specifically excluded, based upon the following verse:

Allah Says (what means): “And tell the believing women to reduce [some] of their vision and guard their private parts and not display their adornment [Zeenah] except only that which [ordinarily] appears thereof and to draw their headcovers [Khumur] over their chests and not display their adornment [i.e., beauty] except to their husbands, their fathers, their husbands' fathers, their sons, their husbands’ sons, their brothers, their brothers’ sons, their sisters’ sons, their female slaves, their women [i.e., their sisters in Islam], or those male attendants having no physical desire, or children who are not yet aware of the private aspects of women. And let them not stamp their feet to make known what they conceal of their adornment. And turn to Allah in repentance, all of you, O Believers, in order that you might succeed." [Quran 24:31]

The word Zeenah in the above verse literally means adornment, and includes both:

(a) That which Allah has adorned (i.e., the woman’s natural and/or physical beauty), and,

(b) That with which they adorn themselves (i.e., jewellery, eye shadow, attractive clothing, hand dye, etc). The word 'Khumur' (pl. of 'Khimaar') refers to a cloth that covers the head (including the ears), hair, neck and bosom.

The garment should be thick and opaque so as not to display the skin colour and form of the body beneath it. Delicate or transparent clothing does not constitute a proper covering. Imaam Al-Qurtubi reported a narration from ‘Aa’ishah that some women from the tribe of Banu Tameem came to see her wearing transparent clothing. ‘Aa’ishah said to them: "If you are believing women, these are not the clothes of believing women.” He also reported that on another occasion, a bride came to see her wearing a sheer, transparent Khimaar, whereupon ‘Aa’ishah remarked: “A woman who wears such clothing does not believe in Soorah An-Noor (i.e., the chapter in the Quran that contains the abovementioned verse regarding the Hijab)." Moreover, the following Hadeeth makes this point graphically clear. Prophet Muhammad said: "There will be among the last of my Ummah (Nation), scantily dressed women; they will wear their hair on top of their heads, like a camel’s hump. Curse them - for verily they are cursed."

The clothing must hang loosely and not be so tight and fitting as to show the shape and size of the woman’s body. This obviously prohibits such things as skin-tight body suits and the like. The following Hadeeth proves this point clearly. Usaamah bin Zayd said: The Prophet once gave me a gift of thick Coptic cloth that he had received as a gift from Dahiyyah Al-Kalbee, so I gave it to my wife. Afterwards, he asked me: “Why haven't you worn the Coptic cloth? I replied: 'I gave it to my wife.' The Prophet then said: "Tell her to wear a thick gown under it (i.e., the Coptic garment) for I fear that it may describe the size of her limbs.” [Narrated by Ahmad, Al Bayhaqi and Al-Haakim]

Allah Says (what means): “O wives of the Prophet! You are not like anyone among women. If you fear Allah, then do not be soft in speech [to men], lest he in whose heart is disease should covet, but speak with appropriate speech." [Quran: 33:32]

The reason for the revelation of this verse was not due to the fear of distrust or misbehaviour on the part of the women, but rather to prevent them from speaking invitingly, walking seductively, or dressing revealingly so as to arouse sexual desire in the heart of lecherous and evil men. Seductive dressing and enticing speech are the characteristics of ill-intentioned women, not Muslims. Imaam Al-Qurtubi mentioned that Mujaahid said: "Women (before the advent of Islam) would walk about among men." Qataadah said: "The women (at that time) would wear an untied cloth on their heads, while provocatively toying with their necklaces, earrings, and other ornamental jewellery."

The clothing of a Muslim woman must not resemble that of men. The following statement helps to explain this: Abu Hurayrah said: "The Prophet cursed the man who wears women’s clothes and the woman who wears men’s clothes." [Abu Daawood and Ibn Maajah]

6. Difference from the Clothing of Unbelievers

Her clothing must not resemble the clothing of the unbelievers. This is a general ruling of the Sharee’ah which encompasses not only dress but also matters such as manners, customs, religious practices and festivities, transactions, etc. Indeed, dissimilarity with unbelievers is a precedent that was established by the first generation of Muslims. ‘Abdullaah bin ‘Amr bin Al-’Aas sad: "The Prophet once saw me wearing two saffron coloured garments, so he said: “Indeed, these are clothes of 'Kuffaar' (unbelievers), so do not wear them.” [Muslim]

7. No Vain or Ostentatious Dressing

The woman’s dress must not be an expression of ostentation, vanity or a status symbol by being excessively showy or expensive, nor must it be excessively tattered so as to gain admiration and fame for being extremely humble. Ibn ‘Umar reported that the Prophet said: “Whoever dresses for ostentation in this world, Allah will dress that person in a dress of humiliation on the Day of Resurrection, and then set it on fire.” [Abu Daawood]

Allah The Almighty has created man in the best shape and form; He says (what means): · {He Created the heavens and earth in truth and Formed you and perfected your forms; and to Him is...More