Knowledge and wisdom - provisions of the caller 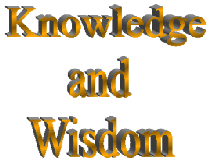 From the greatest favors of Allah and bounties upon a slave is to facilitate means and reasons by which he becomes one who carries out the mission of the religion and to be among those who strive and sacrifice all that is precious to them, to establish the laws of Allah on earth and in order for the Word of Allah to be supreme and uppermost and the word of the disbelievers the lower most. This high rank and honorable one is the most dignified rank and the highest levels. It is the rank of messengers and their way, may Allah their mention. This same task is to be shouldered by the scholars, who inherited this from the Prophets and Messengers.

Calling people to Allah is an obligation upon all Muslim at different levels but it differs according to the level of knowledge, wisdom, way, rank, profession and time. This obligation is evident from many verses that are clear in the Quran and here let us go through some of the verses.

{Let there arise out of you  a group of people inviting to all that is good, meaning Islam, enjoining virtue (meaning Islamic monotheism) and forbidding all evil (Polytheism and disbelief).} [Quran 3:104].

{Say, meaning O! Mohammad, this is my way, I invite on to Allah with sure knowledge, I and whosoever and I follow me and glorify, and exalted is Allah} [Quran 12:108].

{Invite  to the way of your Lord with wisdom and fair preaching and argue with them in a way that is better} [Quran 16:125].

In order for the one who is propagating Islam to achieve positive results in his mission, he should fulfil the following two matters:

1)     Propagating based on sure knowledge:  Allah Says (what means): “Say, this is my way , I invite on to Allah with sure knowledge, me and whosoever follows me and exalted is Allah and I am not one of the polytheist" [Quran 12:108]. It is necessary for all those who desire to call to Allah to have sure knowledge regarding the matter and issue of propagation and inviting to Allah. Some people indulge themselves in the field of propagation without possessing any knowledge.

said that sure knowledge is divided into three parts:

a)     Knowing what one is inviting to

b)     Knowing the situation of the one invited.

First: Knowing what one is inviting to; the propagator must know the Islamic ruling on the issue he is calling to, because he might call to something thinking that it is an obligation while it is not,  and thus obligates people with something  that Allah did not oblige them with. Or he might warn against something thinking that it is prohibited while it is not, and so on. Therefore, knowing what one is calling the people to is a vital issue.

Second: Knowing the situation of the invited: the evidence for the importance of this issue is the narration of Mu’ath

sent him to Yemen,  he

said to him: “You are approaching a group form the  people of the book , so let the first thing you call  them to be the testimony that none is worthy of beiong worshipped but Allah”. Notice that he

informed him about the situation of those whom he will be calling, so Mu’ath, may Allah be pleqased with him, would be prepared and be acquainted with their situation and how he should approach them. It is a mistake that a person invites or calls another person not knowing his situation, his arguments, the kind of falsehood he is on or what he believes in,  because he (i.e. the one being called) might present an argument which the Muslim propagator does not have an answer to, which results in the retreat of the truth.

Third: Knowing how to invite: This refers to the methods of propagation, as Allah did not leave the matter up to us, but he guided us to the ideal way. The Prophet

also guided us how to priorities things which leads us to the second issue.

2)     Adopting a wise method of calling people: One of the Names of Allah is Al-Hakeem, which implies wisdom, and it is mentioned many times in the Quran in connection to knowledge. Allah knows all matters and decrees everything according to His knowledge, based on what is best for the given situation and what will yield the greatest benefit to His slaves. He is the Most Wise and Most Knowledgeable in His words, actions, sayings and rulings.

A wise person is he who places the correct matter in the most suitable place or situation, as defeined by Imaam Ibn Al-Qayyim

. This can be attributed, in its perfect form, only to Allah, as He is the only One who is All-Knowledgeable of everything and the Most Wise in His decrees and rulings.

One of the things that reflect the wisdom of the caller to Islam is his basing his call on knowledge, because wisdom is derived from knowledge, as Allah Says (what means): “Invite to the way of your Lord with wisdom…” [Quran 16:125]. What is the understanding and the proper definition of wisdom.

Selecting the correct method along with the appropriate words is another matter that reflects wisdom in the caller. He should address people in a comprehensible manner, to facilitate understanding on the part of those called.

For example, one should not talk to people about the virtue of optionally fasting three days every month while they do not observe the fast during the month of Ramadan, and so on.

Thus, a propagator of Islam should be mindful of these matters when calling people to the path of Allah, lest he drives them away due to a shortage in any of them.