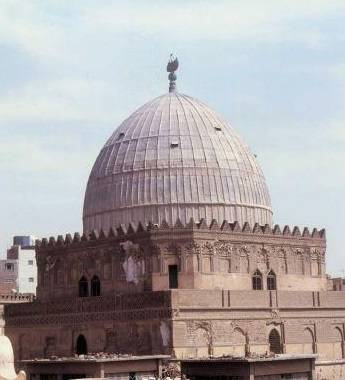 Everything was placid in the large valley except for the voice of a two-year old child who was weeping. His mother embraced him, took him close to her chest, and patted his shoulders with tenderness and compassion. The youngster quickly went into sleep as his mother stared at the far horizon saying in a low weakened voice : “may Allah have mercy on your soul: father of Muhammad (her husband); you took us with you from Makkah to Gaza in search of our daily bread and good life, yet you died and were buried here. Here am I on my way to Makkah again to have your son raised among his tribe and clan 'Banu Al-Muttalib'.”

The poor mother went into a bitter fit of weeping and crying as she remembered those few years she had spent in Palestine with her beloved husband, who was the best husband, brother, and friend for her. However, the happy and beautiful days passed as quickly as clouds, or as a short but pretty dream.

In the honorable Makkah, the mother lived with her child in the protection of her husband's family. She raised her son by giving him a good education and instructions, flowing on him her love and compassion, so the youngster grew up with a well balanced psyche, a peaceful nature, and great ethics. The virtuous mother took on her shoulders the responsibility of teaching her son the Quran, reading, and writing so that he may be well acquired with both religious and other fundamental knowledge. Thus, she sent her son to one of the small elementary schools despite her poverty and inability to save the instructor's wage. Yet, Muhammad went to his first day at school almost unable to walk properly, and when the instructor saw Muhammad, he sort of belittled him and told him: “O my son, just sit next to me and listen carefully to your elders so that you may get used to reading and memorization.”

was glittering with intelligence and ingenuity. He used to incredibly quickly learn by heart whatever he heard from what the teacher dictated to his students. Every single day in the small school his knowledge increased along with his enthusiasm to learn more. His teacher then loved him more and actively pushed him forward. The youngster naturally became more and more distinguished, until his teacher told him one day, “My son, you are highly smart and intelligent to the extent that I hardly make any effort with you that is worth any wage. All I need from you is to teach on my behalf when I am not present.” The youngster rushed happily to his mother to tell her the happy news that she would not have to pay anymore for the teacher. The virtuous mother was glad for her son's excellence and encouraged him even more to study. This led him to embark actively on the completion of learning the Quran by heart which he finally completed when he was only seven years old.

Being in great happiness for her son's completion of the memorization of the Quran in that fast manner, she started thinking how could she best direct this smart child towards more excellence. She sent him to attend the lessons given around the Sacred Mosque of Makkah. The boy started to listen to prominent scholars; and as he did not have the price for paper on which to write what he listened to, he used parchment, palm tree leaves, and camel shoulder bones. During this early period of his quest for knowledge, Imam Ash-Shafi'ee

intelligently realized the importance of the learning the classical Arabic language from its pure sources, in order to understand the Quran and the Sunnah, (the Prophet Muhammad's

sayings, acts, and approvals) in the best possible way. He went to the Huthayl tribe, which was among the most eloquent Arab tribes, and stayed with them for long years in which he learned their eloquence, memorized their poems, studied the biographies of Arabs from pre-Islamic era as well as the Islamic era, and learned the skill of knighthood and archery. He eventually became a brave unrivaled knight and a skillful archer who rarely missed his target.

returned to his beloved hometown Makkah. No sooner had he quenched his longings to his mother, he continued his quest for knowledge enthusiastically. He headed for the Grand Mufti (Religious Jurist) of Makkah, the Sacred Mosque, Muslim Ibn Khalid Az-Zinji who became the first teacher for him in Fiqh (Islamic Jurisprudence). He also, started studying Hadeeth under the supervision of Sufyan Ibn 'Uyaynah, the narrator of the Sacred Mosque. In a short time, Imam Ash-Shafi'ee

rose to prominence as an excellent Islamic scholar. His mentor, Muslim Ibn Khalid gave him permission to answer the religious enquiries when Imam Ash-Shafi'ee was only fifteen. He told him proudly, “O Muhammad! Give fatwa and answer the questions of people. By Allah! Now it is opportune for you to give fatwa." His other mentor, Sufyan Ibn 'Uyaynah, used to refer enquirers to him while he turned towards him and pointed "ask this boy.”

. He wanted to become a student of Imam Malik

yet he saw with his sharp intellect that he should not go to him unprepared and void. He memorized Malik's famous book “Al Muwatta” in only nine days. After that he went off to see Imam Malik

in his house in Madeenah. Imam Ash-Shafi'ee

spoke eloquently and politely with the Imam and told him that he wished to become his student. The Imam looked at the boy for a long time as the boy was telling his story of how he sought knowledge so far. The Imam had an astonishing physiognomy and a penetrating insight; he told him: “My son! By the Will of Allah you will have a great future. Tomorrow come to me and bring with you someone who could read the Muwatta' well as I fear you would not be able to read it by yourself.” Imam Ash-Shafi'ee

responded with the same politeness “Imam, I will read it myself from memory without a book.”

remained in the company of Imam Malik

for a long time. The Imam loved him a lot, and in 179 A.H after Imam Malik passed away, Imam Ash-Shafi'ee

returned to Makkah from Madeenah equipped with a great load of knowledge which had influenced his life. In Makkah he was wedded to Hameedah Bint Nafi', a grand daughter of Caliph 'Uthman Ibn 'Afan

and had two sons and a daughter from her.

In the courtyard of the well of Zamzam and next to Prophet Ibraheem's Maqam (the stone on which he stepped up to put the bricks in the Ka'bah), Imam Ash-Shafi'ee

sat down to teach people and around him many students were gathered from everywhere. His circle became very prominent in the Sacred Mosque of Makkah and even became well known outside Makkah until it reached Iraq. Abdur-Rahman Ibn Mahdi, one of the scholars of Iraq sent him a letter requesting that he authors a book on the evidences of legislation from Quran, Sunnah and the consensus of the religious scholars, as well as other issues upon which the science of Fiqh (Islamic Jurisprudence) is built. Imam Ash-Shafi'ee, may Allah have mercy upon him, wrote the book and named it Ar-Risalah (The Treatise) which became the first book that founded what came to be called: 'Ilm Usul Al Fiqh (The science of the sources of Islamic Jurisprudence), of which Imam Ash-Shafi'ee

was the organizer, classifier, and the inventor of its issues.

traveled to Baghdad for the second time and continued to teach there for two years. Many studied under his supervision including Imam Ahmad Ibn Hanbal

who later said “Had it not been for Imam Ash-Shafi'ee

we would not have known the understanding of Hadeeth.” Before he left Iraq he had finished writing his large book Al Hujjah (the Proof), in which he put down the essence of his new school of jurisprudence.

In 199 A.H the Imam went to Egypt where he stared to spread his knowledge between the Egyptians who loved him very much. More students came to him from all over the world. Towards the end of his life, the Imam became very sick. This illness continued with him for four years yet it did not stop him from teaching or lecturing. When he came back to his house after teaching, he used to force himself to ignore the pains of the sickness and get absorbed in writing, and editing and proofreading the book of Hujjah which he wrote in Iraq. After completed the proofreading and editing works he renamed the book’s name as Al-Umm (The Mother). The Imam remained to follow his daily routine until illness forced him to retire and stop teaching. His students used to visit him to console him in his sickness. One day one of his students entered his room and asked him: “How do you feel this morning O Imam?” Ash-Shafi'ee

answered: “I feel that I am traveling away from this world, away from the brothers, drinking from the cup of death, and approaching Allah the Glorious. By Allah I do not know if my soul will go to heaven so that I may congratulate it, or to hell so that I may lament.” He then went into crying. On a Friday, the last day of Rajab in the year 204 A.H, his pure soul went up to its Provider and Caretaker. He was buried in the cemetery of Qurashiyyeen amidst the cemeteries of Banu Al-Hakam in Egypt. May Allah bless the Imam's soul and admit him into his wide paradises.

Al-Layth Ibn Sa'd: the Imam of the Egyptians

Everything was placid in the large valley except for the voice of a two-year old child who was weeping. His mother embraced him, took him close to her chest, and patted his shoulders with tenderness and...More