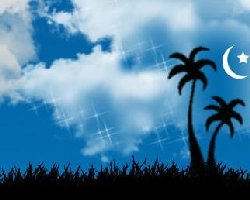 Some people might think, falsely, that celebrating the disbelievers’ occasions is a way to entertain children on the one hand, and to facilitate trade on the other hand. However, the first belief indicates ignorance of Sharee‘ah, and the second ignorance of sound creed. When Allah The Almighty forbade the polytheists to approach Al-Masjid Al-Haraam (The Sacred Mosque in Makkah), in His statement (which means): {O you who have believed, indeed the polytheists are unclean, so let them not approach al-Masjid al-Haraam after this, their [final] year} [Quran 9:28] This squandered the worldly benefits concerning trade and exchange of commodities. Allah The Almighty, therefore, says following that (what means): {And if you fear privation, Allah will enrich you from His Bounty if He wills. Indeed, Allah is Knowing and Wise.} [Quran 9:28] Real wealth comes from Allah The Almighty, and it is impermissible to seek wealth or ascribe it to any means that is invalid under Sharee‘ah, such as the holidays and celebrations of the disbelievers. So, let those who disobey the Command of Allah The Almighty beware lest they would be afflicted with Fitnah (tribulation) or with a painful torment.

What is stated as permissible for Muslims to celebrate by specific texts is only ‘Eed Al-Fitr and ‘Eed Al-Adh'haa. People have two views about ‘Eeds that texts do not mention: that they are forbidden on the basis of being a religious innovation, or that they are permissible under the pretext of not being forbidden by a text.
Those who adopt the view of prevention support their argument with the Hadeeth narrated on the authority of Anas, may Allah be pleased with him, in which it was narrated that the Messenger of Allah,

, arrived in Madeenah and found that its people had two days of entertainment. He,

,  asked: "What are those two days?"They replied, "We would entertain ourselves on these days during the pre-Islamic era." On that the Messenger of Allah,

, said: "Indeed, Allah has given you, in their place, two days better than them: the day of Al-Adh'haa, and the day of Al-Fitr." [Abu Daawood and An-Nasaa'i] Any day other than these two is thus considered innovation in religion.
However, those who adopt permissibility argue that this might be refuted by the fact that the Hadeeth does not restrict the ‘Eeds to these two only and merely serves to highlight their superiority to the feasts of the people of Madeenah which were transmitted from the Persians like the Persian New Year's Day (Nawrooz) at the outset of spring, and the Festival Day at the outset of autumn. Further evidence is that Friday is also called ‘Eed.
However, to refute the claim of permissibility, the Prophet,

, neither accepted these ‘Eeds or let the Muslims entertain themselves on those days as they would previously do. On the contrary, he,

, said to them: "Indeed, Allah has given you, in their place, two better days." To replace a thing with another thing requires that the replaced thing is completely forsaken as it is impossible to join both.
Now, no trace of these two days are noticeable in the lives of the Muslims, nor have we read anything about them in the books of traditions, especially given that feasts have a great impact on people and are always enjoyed, particularly by women and children, in view of the entertainment brought about by them. This is why a lot of kings and presidents may fail to divert the people from their customary feasts, due to their strong attachment to them, and due to the fact that holidays are widely cherished by the public.
Thus, it is known that the forbiddance given by the Prophet,

, was strong and effective in the souls of the Muslims in order to keep the Islamic Ummah (nation) far from melting into the nations who follow other religions - nations who would strive to obliterate and deface it in every possible way.
This statement of the Prophet,

, also indicated that Sharee‘ah has made it unlawful for us to celebrate non-Muslim feasts, whether in the form of extending greetings to them on the occasion of such holidays or by saying or doing anything that might indicate approval of such occasions.
The Prophet,

, said to Abu Bakr, may Allah be pleased with him: "O Abu Bakr, every people have their ‘Eed, and this is our ‘Eed." [Al-Bukhari and Muslim]
Thus, the statement of the Prophet,

, indicated that the Sharee‘ah has specified two ‘Eeds that are characteristic of us, which are the ‘Eed Al-Fitr and ‘Eed Al-Adh'haa, in which only the Muslims partake, and it is impermissible for us to add to them any other feasts, for feasts are among the Sharee‘ah-approved acts of worship that are impermissible to innovate or to introduce anything other than what was ordained by Allah The Almighty and His Messenger,