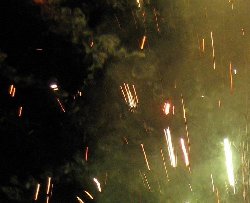 Some religious scholars have divided feasts into two categories: religious and non-religious.

The religious are divided into those stated by text, such as like Al-Fitr and Al-Adh'haa. As far as they are concerned, it is unanimously acknowledged by the scholars that it is permissible to celebrate them, and permissible entertainment and amusement on them are allowed, provided that no sanctity is violated nor any sin is committed.
Others are not stipulated by text like the Prophetic Mawlid (birthday), Al-Israa' Wal-Mi‘raaj (the Prophetic Night Journey), and Al-Hijrah (the Emigration). In this context, scholars have two different opinions:
The first is prevention on the basis of the fact that celebrating such days are innovation in religion.
The other is permissibility based on the fact that prevention has not been stipulated by text; and the refutation of that claim has previously been mentioned.
Non-religious holidays can also be divided into two categories: Anything that does not belong to an invalid belief, such as the Day of Victory, the Day of Eviction (of mandate soldiers), and the Day of Revolution. According to some scholars, it is permissible to celebrate such days, provided that no sanctity is violated nor sin is committed.
However, celebrating such days contradicts what is preferable, for the Companions, may Allah be pleased with them, the best of people, did not celebrate the anniversary of the days of Badr, Uhud, Al-Khandaq, or any other of their days of victory. Moreover, the economies of many countries does not allow for such celebrations, and a Muslim is required to spend his wealth on what is beneficial rather than on banquets and decorations which have led us to suffering and underdevelopment.
The other belongs to an invalid belief, like Valentine’s Day, Mothers’ Day, and Easter’s Day: which are holidays that originated from invalid creeds like that of the Egyptian Pharaohs and have certain rituals like preparing particular types of food. No Muslims should celebrate these days or participate in celebrating them. It should be highlighted that being courteous to those celebrating these days is done at the expense of our religion, moral character and dignity and doing so is a Sharee‘ah-disapproved misdeed.
In modern times, the Ummah (Muslim nation) has invented the celebration of birthdays in imitation of the People of the Book, and the Christians in particular in their celebration of the birthday of ‘Eesa (Jesus), may Allah Exalt his mention.
Taking the Prophetic Mawlid (birthday) as a festival - given that people have differed regarding his date of birth - is impermissible, as this was not practiced by the righteous predecessors, even though they were able to do it and there was no impediment from celebrating it. Had this been entirely or even partly good, then, of a surety, the righteous predecessors, may Allah be pleased with them, would have had more right than we do to celebrate it, for they loved and exalted the Messenger of Allah

more than we do and were keener on doing good deeds. However, the perfection of love for and exaltation of him lies in following and obeying him, implementing his commands and giving life to his Sunnah both inwardly and outwardly, spreading what he was sent with, and striving to do so with the heart, hand and tongue. That was the way of the foremost predecessors from among the Muhaajiroon (emigrants) and the Ansaar (their supporters from the residents of Al-Madeenah). But as for those who are keen on such religious innovations, whatever good their purpose and reasons might be, they are always weary to implement the commands of the Messenger of Allah

and anything which they were ordered to do with eagerness. Their parable is that of someone who decorates the Quran but does not read it, or reads it but does not act upon it; or of someone who decorates the mosque but does not pray in it, or prays in it only a little. [Mukhaalafat As'haab Al-Jaheem by Ibn Taymiyyah]
The same applies to the celebration of the birthdays of the Awliyaa' (pious people), namely, the Mawlids; and it is well-known that such festivities are disapproved innovations in religion and apparent misdeeds. Amazingly, these deceased Awliyaa’ did not hold birthday celebrations for themselves when they were alive, but when they died, the masters of such religious innovations invented these evildoings and errors, in imitation of the Christians in their celebration of the birthday of the Christ and the celebrations held by them at the beginning of every Gregorian year.
More amazing is that none of those feasts are held in winter, but they are all held in summer or spring, as if the Awliyaa' were only born on those seasons.
The same is true of the birthday parties that are held by many Muslims in their houses for themselves or their children, in which they light candles or do other things. This type of celebration is one of the disapproved innovations in religion, and is a clear manifestation of imitation of the non-Muslims, which is the result of lack of faith, ignorance of the rulings of Sharee‘ah, and blind imitation without deliberation or thinking.
Finally, some callers to Islam and reformers might be grieved because of the fact that such practices have become widespread in Muslim countries. Sincere Muslims have the right to be concerned about this, but the public alone cannot be held responsible for all of this. The community becomes upright by two concomitant things: strong belief that is established in the souls of people, and a firm decisive ruler who sees that his duty is to save the public from deviation.