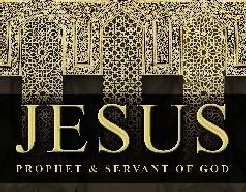 Allah, The Almighty, Says (what means): {The Messenger has believed in what was revealed to him from his Lord, and [so have] the believers. All of them have believed in Allah and His Angels and His Books and His Messengers, [saying], "We make no distinction between any of His Messengers." And they say, "We hear and we obey. [We seek] Your forgiveness, our Lord, and to You is the [final] destination."} [Quran 2:285]

Muslims believe in ‘Eesa, may Allah exalt his mention, as:

• An honorable Prophet of Allah The Exalted and one of the five messengers with firm determination.

• A human being who was born like any other creation and he passed through the normal stages of life like other human beings.

• A human being whose life has a beginning and must have an end. His life started when Allah, The Exalted, decreed it and it will end when he dies. Allah, The Almighty, Says [on the tongue of ‘Eesa] (what means): {And peace is on me the day I was born and the day I will die and the day I am raised alive.} [Quran 19:33]

Some Christians wonder how Muslims could say that ‘Eesa, may Allah exalt his mention, did not die while the verse in the Quran reads (what means): {[Mention] when Allah Said, "O Jesus, indeed I will take you and raise you to Myself and purify you from those who disbelieve and make those who follow you [in submission to Allah alone] superior to those who disbelieve until the Day of Resurrection…”} [Quran 3:55

According to their argument, they criticize what is mentioned in the verse arguing that:

1. The Quran says that ‘Eesa, may Allah exalt his mention, died and the one who dies does not come back, so how do Muslims say that he will return at the end of time [of this world]?

2. The verse states that the followers of ‘Eesa, may Allah exalt his mention, are the best people in terms of religion and status. They claim that they are his followers who are meant in the verse.

To refute their first argument, the word ‘take you’ that was used does not mean death, rather, it means taking him, and I shall provide two lucid pieces of evidence from the Noble Quran to prove my argument.

1- Allah, The Almighty, Says (what means): {And it is He Who takes your souls by night and knows what you have committed by day. Then He revives you therein that a specified term may be fulfilled.} [Quran 6:60]

This verse means that when we sleep, Allah, The Almighty, takes our souls and He Knows all that we did during the day. Al-Qurtubi

2- Allah, The Almighty, Says (what means): {Allah takes the souls at the time of their death, and those that do not die [He takes] during their sleep. Then He keeps those for which He has decreed death and releases the others for a specified term. Indeed in that are signs for a people who give thought.} [Quran 39:42]

The souls that Allah, The Exalted, takes can be classified into two categories: The first category is the souls of those people whose life term has come to an end and so they die; whereas, the second category includes the souls of those whose life term has not yet come to an end; hence, their souls come back to them until the exact time on which Allah, The Almighty, has decreed their death.

Therefore, ‘I will take you and raise you to Myself and purify you from those who disbelieve’ was only addressed to ‘Eesa, may Allah exalt his mention, among all human beings and this proves that he did not die and that he will come back at the end of time and this would be one of the signs of the Hour.

Moreover, Allah, The Almighty, confirms this fact in the verse that reads (what means): {And [for] their saying, "Indeed, we have killed the Messiah, Jesus, the son of Mary, the Messenger of Allah." And they did not kill him, nor did they crucify him; but [another] was made to resemble him to them. And indeed, those who differ over it are in doubt about it. They have no knowledge of it except the following of assumption. And they did not kill him, for certain. Rather, Allah raised him to Himself. And ever is Allah Exalted in Might and Wise ...} [Quran 4:157-159]

Allah, The Almighty, also Says (what means): {And indeed, Jesus will be [a sign for] knowledge of the Hour, so be not in doubt of it, and follow Me. This is a straight path.} [Quran 43:61]

In fact, ‘Eesa, may Allah exalt his mention, himself said as was mentioned in the verse that reads (what means): {[Jesus] said, "Indeed, I am the servant of Allah. He has given me the Scripture and made me a prophet. And He has made me blessed wherever I am and has enjoined upon me prayer and Zakah (purifying alms) as long as I remain alive. And [made me] dutiful to my mother, and He has not made me a wretched tyrant...} [Quran 19:30-32]

The refutation of this argument is that there are numerous verses in the Noble Quran proving that Allah, The Exalted, had breathed into Aadam, may Allah exalt his mention, of His Soul. Allah, The Almighty, Says (what means): {And when I have proportioned him and breathed into him of My [created] soul, then fall down to him in prostration.} [Quran 15:29]

Allah, The Almighty, also Says (what means): {Then He proportioned him and breathed into him from His [created] soul and made for you hearing and vision and hearts; little are you grateful.} [Quran 32:9]

Our attitude and duties towards New Year's Eve