Palestinians and the 'Jewish state' 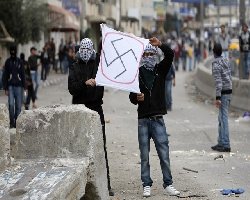 Avigdor Lieberman is at it again. The right-wing Israeli foreign minister wants the Palestinian Authority (PA) to effectively accept the expulsion of Palestinian-Israelis (or Israeli-Arabs as they are known inside Israel) as part of an Israeli-Palestinian peace agreement.

Speaking to a government committee on Sunday, Lieberman said that the guiding principle of the current Palestinian-Israeli negotiations should be the exchange of land and populations and not land for peace. In other words a peace treaty should involve the Israeli annexation of heavily populated Jewish settlements in the West Bank and the PA taking the Palestinian population of Israel into territories under its jurisdiction.
He explained that since both the Arabs and the Palestinians have refused to recognize Israel as a Jewish state, the status of the Arabs in Israel should be the focus of the negotiations.
Lieberman is often at odds with other Israeli officials over some of his extremist views, but these statements are consistent with the essence of Israel's insistence that the Palestinians accept Israel as a Jewish state.
According to Palestinian officials, Mahmoud Abbas, the Palestinian president, rejected that demand during the first round of direct talks in Washington earlier this month on two grounds. The first being that it would be a betrayal of the rights of Palestinian-Israelis to stay in their homeland and to fight for equal civil rights and the second that it would amount to forfeiting the right of return for Palestinian refugees.
But these two reasons are exactly why Israel is pushing for Arab recognition of Israel as a Jewish state. It wants the Palestinian leadership in one swift move to legitimize the expulsion of Palestinian-Israelis and to end any discussion of the right of return.
Israeli officials have probably been emboldened by inter-Palestinian divisions and the weakened representative status of Abbas and, more broadly, the PA.
The Palestine Liberation Organization (PLO), in its capacity as the organ that set up the PA in 1994, extended the terms of both the president and the Palestinian parliament. But until new elections are held, Abbas' position as president will remain weakened as Hamas effectively controls the Gaza Strip and Fatah the West Bank - while both function under Israeli control.
But even in a weakened position, recognizing Israel as a Jewish state is a red line that no Palestinian leader can cross.
But the danger inherent in recognizing the Jewishness of Israel goes far beyond the two points raised by Abbas to the very heart of Palestinian national rights.
For if Israel is a Jewish state, in the sense that Jews are the indigenous population, that means the West Bank is not an occupied territory and the Palestinians are there as an accident of history.
The basis of the Palestinian claim to nationhood and independence rests on the fact that Israel was established on Palestinian land. But Israel is demanding that Palestinians not only forget but legitimize their own dispossession by accepting the essentially racist claim that Israel is a Jewish state.
Lieberman has always managed to strip the sugar-coating off Israeli demands. On Sunday, he again insisted that Palestinian-Israelis should have to prove their loyalty to Israel. His party, Yisrael Beiteinu, has been - so far unsuccessfully - trying to pass a law that would force Palestinian-Israelis to swear an oath of loyalty to Israel.
He cited the examples of Knesset member Haneen Zoabi and Sheikh Raed Salah, the leader of the northern branch of the Islamic Movement in Israel, as Arabs who should not be in Israel, but could serve in the parliament of Gaza or the PA since they cannot "hold the stick at both sides".
But Ahmad Tibi, another Arab member of the Knesset, has responded forcefully to Lieberman, who was born in Russia but migrated to Israel in the 1990s. "It is outrageous that a new immigrant who arrived in the late twentieth century wants to expel us, the indigenous people, from our homeland," Tibi declared. "We have been here long before him, this fascist who came last has to leave and not us."
Palestinian negotiator Nabil Shaath has reiterated that Israel's demand and Lieberman's statement "are utterly unacceptable". But it is unlikely that Israel will drop its stipulations now.
As divided as the Palestinians are, they are united in their refusal to deny their very identity and history in their homeland. For if Palestinians accept the Jewishness of Israel there will be nothing left to negotiate over and they will be reduced to simply struggling to improve the conditions of their submission.
PHOTO CAPTION
Israeli foreign minister Avigdor Lieberman
Source: Aljazeera.net