Developing the Child's Sentiments - I 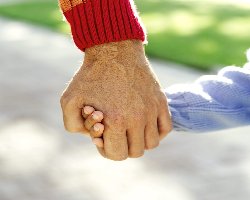 1) Teach values to your children:

The Islamic Sharee‘ah (Islamic legislation) came to direct people to the most upright way, and guide them to the straight path, which conveys them to the happiness of both the World and the Hereafter. The good manners mentioned and referred to by the Quran are beyond calculation. Allah The Almighty described His Messenger Muhammad

the last of His Messengers, in this high rank of moral grandeur, for noble human manners are the fruits of the faith in Allah The Almighty, faith in the resurrection and the Last Day. That is the significance of the statement of the Prophet

: "I indeed have been sent (as a Prophet) to perfect the noble manners."

it becomes incumbent upon us, as parents, to implant noble manners within our children, and bring them up in accordance with these manners. We should instruct them all the time and be good examples for them to follow. But even then, there is no way to implant those virtues to be a part of our children's conduct unless they are put into practice.

A parent should be fully truthful with his children: he has to answer all their questions simply and truthfully. When watching a scene on TV, clarify to your children the consequences of deception, cheating and stealing.

Remind your children of the statement of the Messenger of Allah

: "Give back the trust to him who has entrusted you, and betray not him who has betrayed you."

Praise your children for any attempt revealing praiseworthy enterprise or courage, and reward the least initiative to bravery taken by anyone of them, even if it appears during the first years (of childhood).

Demonstrate bravery in front of your children, and talk a lot about it, and make your personality a model for them to imitate. It is good to tell your children about the difficulties you have faced throughout your life, but not boastfully in so much as honestly in a way that gives them the impression that even older people face difficulties.

Teach them that bravery is to do what is correct and necessary, to hasten to help others, to be careful to make the correct decision before you confront any situation, and to seek the aid of Allah The Almighty before you start any task.

Remind your children of the Quranic principle: {….Repel [evil] by that [deed] which is better; and thereupon the one whom between you and him is enmity [will become] as though he was a devoted friend.} [Quran 41:34]

Teach them that had people adopted this principle, there would have been neither disputes nor oppression, neither conflict nor quarrels between them.

Teach them how to deal with people humbly and according to the basis of forbearance and self-control; that to behave humbly indicates power rather than humiliation; and that the Messenger of Allah

commanded us to behave humbly towards each other with neither mortification nor transgression. He said: "Verily, Allah revealed to me that 'You should behave humbly, and transgress not against each other.'"

Furthermore, we should be lenient in all matters. In confirmation of that, the Messenger of Allah

says: "No doubt, Allah is lenient, and He likes lenience, and Gives (as reward) for it what He does not give for harshness."

Both quietness and self-control are among the supreme virtues, as confirmed by the Messenger of Allah

Teach them, from their early childhood, that good treatment is practical and real. If your child makes noise in front of you, or raises his voice while asking you for anything pressingly, tell him to keep quiet first, and beware of yielding to his anger. Control yourself, and keep quiet. Then, take him somewhere and make him sit on a chair. If you are convinced that his anger has calmed down, then, give him the thing he asked for, while telling him that it is good treatment and peacefulness, and not noise which helped him get what he wanted, and that noise brings about no good, and has no benefit.

Teach your children that it is due upon a man to work earnestly, as Allah The Almighty Says (what means): {…"Do [as you will], for Allah will see your deeds, and [so, will] His Messenger and the believers…."} [Quran 9:105] The Messenger of Allah

says in this respect: "No one ever eats anything better than what he eats from the labor of his hands."

Instruct them that children have to work seriously and energetically in their study in order to depend on themselves when they grow up and thus, be able to eat from the labor of their own hands. Be a good example for others to follow, and give them the impression that you always seek to be better and higher not only in your work, but also in all affairs of life.

Scrutinize your children and acknowledge their talents, and help them detect their own selves. There is a fact admitted by the educators, "The children are not elastic dough which we could molded in any way we will." It is more correct to say that they are "but seedlings", which have their characteristic properties: we cannot transform the seed of an oak tree into a pear tree, but we have to endeavor to help each tree grow according to its own properties.

Let your children break their own records instead of comparing themselves with others. For example, encourage them to get a higher rank in their school year and be better than their achievement the year before.

Make suggestions to your children more than commands as much as you can, and ask whether they need your help, but do not impose your help.

Try to make fewer decisions and give more encouragement to your children to help their talents blossom. Do not tell your child, at first, what to do, but let him know by himself what to do, and remind him of what he could do, since reminder also benefits the faithful believers.

Allah The Almighty described the Muslim Ummah (nation) by saying (what means): {And thus We have made you a just community....} [Quran 2:143]

Teach your children to be moderate in everything permissible as regards food, drink, speech, sport, and pocket money. Teach them to know the limits of the body and mind, and how to avoid extremism and imbalance. Tell them the following:

-     Excess in playing may exhaust you and tire your body.

-     Excess in watching TV may hinder you from study, let alone its other negative effects.

-     Allow your children to spend their money by themselves.

-     Encourage your children to give in charity, even a small percentage of their money to the poor and indigent.

The Company We Choose to Keep