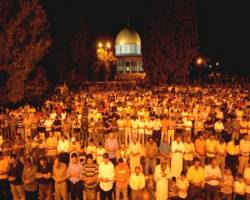 Hard work should be the slogan of the righteous people who do not like Ramadan to pass away before they take their reward. They would rather persist in this good state in order to receive their prize from their Lord, and obtain His forgiveness than enjoy the pleasures of this world. Thus, when they celebrate ‘Eed, they would have earned the right to do so, and when they break their fast, they would rejoice, as mentioned by the Messenger of Allah

when he said: "There are two delights for the fasting person: when he breaks his fast at the time of Iftaar, he rejoices; and when he meets Allah The Almighty, he will rejoice in his fasting." [Al-Bukhari and Muslim] That is, he will find that fasting, whose outcome is forgiveness and emancipation from Hell, interceding for him on the Day of Judgment, as confirmed by the Messenger of Allah

in his saying: "The fasting people will enter (Paradise) from a gate called Ar-Rayyaan, from which no one else will ever enter."

The days have come upon us again, with the same slogan we have already raised: the determination to attain all the possible means of the forgiveness of Allah The Almighty, and strive his utmost to show Allah The Almighty our good performance, truthfulness, good deeds and sincerity. We approach the Lord with devotion and direct all our concerns, words and deeds to obtain the good pleasure, love and attachment of his Lord, and prepare for his Hereafter. If a believer does all this for the sake of Allah The Almighty, he will receive more in the world and the Hereafter, as confirmed by Allah The Almighty when He Says (what means): {And [remember] when your Lord proclaimed, 'If you are grateful, I will surely Increase you [in favor]; but if you deny, indeed, My punishment is severe'"} [Quran 14:7] One must be satisfied with a little portion of this world, seek the Hereafter, have aversion to the abode of arrogance in order to have the signs of the love and good pleasure of Allah The Almighty visible on him.
Hence, in the days of Ramadan, one should begin with repentance, seek forgiveness, and seek to amend his inner self persistently so that he would prepare his own soul and heart for the reward of Allah The Almighty. In this way, he can make up for the days on which he was lazy and slow, and distracted from Allah The Almighty, and seized by heedlessness in all of his states and deeds. He repents for the days he did not obtain anything from the Quran and remembrance (of Allah The Almighty) that could fill his breast with the light of faith, and make his heart firm, so that he would find himself approaching the Hereafter, unaffected by desires, well-established and strong on his journey to Allah The Almighty. He should not find himself compliant with the devil and his own evil inclinations, hesitant and distracted. On the contrary, he should see himself in a state loved by his Lord.
It was narrated on the authority of the Messenger of Allah

that whenever the last ten days came, he would stay awake all night (in prayer), keep aloof from women, devote himself to worship more diligently and awaken his family (to perform the night prayers). [Al-Bukhari and Muslim] This was his practice during the last ten days of Ramadan. He did all this by practicing I‘tikaaf (seclusion in the mosque). That is, he devoted his heart and body to his Lord, refrained from mixing with people to be in seclusion with Allah The Almighty, and became an example to be followed by the believers. This seclusion with Allah The Almighty is a means for the people to reform their worldly affairs and Hereafter, prepare their hearts and body to realize the means of forgiveness. He did all this persistently in the last ten days of Ramadan seeking to be forgiven, even though Allah The Almighty had forgiven his previous and future sins. He did all of this by way of showing gratitude: "Should I not be a grateful slave?" [Al-Bukhari]