There is Blessing in Suhoor 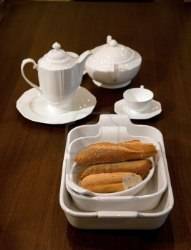 said: "Take Suhoor as there is a blessing in it." [Al-Bukhari and Muslim] In this Hadeeth (narration), there is an injunction to take Suhoor, which means eating and drinking directly before dawn in order to get ready to fast that day. The wisdom underlying this order is also mentioned: namely, the blessing it contains.
Blessing is the descent of divine goodness in something and being fixed therein.

Blessing also means the increase of goodness, reward and all the useful things needed by a slave in the life of this world and in the Hereafter.

Blessing comes from Allah The Almighty and cannot be attained except by obeying Him.

It is noticed that some of those who fast do not heed the importance of having the Suhoor meal and delaying it; they may even abandon it entirely. They might take a meal at midnight or before sleeping at night, whether because of the worry that they may not wake up on time, or because of their desire to sleep longer, or their indifference to Suhoor and its blessings, or their ignorance of the matter. This is a mistake that should be avoided as it contradicts the Sunnah (Prophetic tradition) and deprives one of the blessings of Suhoor.

A person who intends to fast should take Suhoor and delay it until directly before dawn, even if the Suhoor is only a little as this has numerous benefits and great blessings. Among its blessings is that it constitutes obeying the command of the Prophet

mentioned in the Hadeeth: "Take Suhoor as there is a blessing in it." [Al-Bukhari and Muslim] This favor and honor (i.e., obeying the command of the Prophet

Allah The Almighty Says (what means):

•   {He who obeys the Messenger has obeyed Allah} [Quran 4:80]
•   {And whoever obeys Allah and His Messenger has certainly attained a great attainment.} [Quran 33:71]

Among its blessings is that it distinguishes Muslims as it contradicts the practice of the People of the Book. The Prophet

said: "The difference between our fasting and that of the People of the Book is eating Suhoor (shortly before dawn)." [Muslim]

Another blessing is that it fosters prosperity and preserves it. It was reported on the authority of Sahl ibn Sa’d As-Saa’idi, may Allah be pleased with him, that the Prophet

said: "The people will continue to prosper as long as they hasten to break the fast and delay the Suhoor." [Al-Bukhari and Muslim]

Among the blessings of Suhoor is that it gives the strength needed to perform acts of obedience, helps in performing acts of worship and increases one’s stamina and ability to work. A hungry and thirsty person is stricken by laziness.

Among the blessings of Suhoor is attaining the salutations of Allah The Exalted and His angels: "Allah and his angels definitely send salutations on those who eat Suhoor." [Ibn Hibbaan and At-Tabaraani in Al-Awsat] [Al Albaani: Hasan]
In addition, Suhoor prevents one from indulging in bad behavior and misdemeanor that may result from hunger.

Moreover, the time of Suhoor is a blessed time. It is the time when Allah The Almighty descends in a way that befits His Glory and Majesty with His glory and greatness. The Messenger of Allah

Also among the blessings is that this time is one of the best times for seeking forgiveness, if not the best ever. Allah The Exalted praises those who seek forgiveness at this specific time. Allah The Almighty Says (what means):

Thus, waking up for Suhoor is a reason for obtaining this bounty and attaining the various blessings of seeking forgiveness.
Furthermore, one of the blessings of Suhoor is that it makes it more likely for a person to answer the call to Fajr prayer, and it is well known that this has great rewards. It guarantees performing the Fajr prayer on time in congregation.

Moreover, among the blessings of Suhoor is that eating this meal is considered an act of worship in itself, if by doing so one intends to increase one’s strength and use it in obeying Allah and intends to follow and adhere to the way of the Prophet

. Besides, if the one who intends to fast takes Suhoor, he will not get tired of fasting; rather, he will long for it. On the other hand, those who do not take Suhoor find great hardship in fasting that makes it difficult for them to fast again.

Among the blessings of Suhoor is that Allah The Almighty places goodness in the activities of the one who partakes Suhoor, so that he is guided to doing good deeds on that day. He finds the energy to perform obligatory and voluntary acts of worship, recite Athkaar (words of remembrance), enjoin good and forbid evil and so on. Otherwise, if he does not take Suhoor, fasting may make it difficult for him to perform all these things.

In brief, the blessings of Suhoor are too many to be counted. Allah The Almighty, in His Sharee’ah, has wisdom and secrets that are astounding to the minds, and that only a few may realize. However, we should remember these great meanings and remind others of them.