O You Who Has Completed Ramadan - III 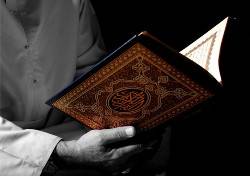 taught me these supplications, I never stopped saying them (at their appropriate time): Subhaan Allah (Glory be to Allah), and Allahu Akbar (Allah is the Greatest), and Alhamdulillaah (All praise be to Allah) - thirty-three times each at the conclusion of every prayer. (I even said them) during the battle of Siffeen.” In addition, ‘Abdullaah ibn ‘Amr ibn Al-‘Aas, may Allah be pleased with him, continued to finish reciting the entire Quran every three days until he died, despite it becoming difficult for him due to his old age; he continued this because he began doing it during the lifetime of the Prophet

There are several ways of remaining constant in the performance of righteous deeds after Ramadan has departed. One of these is to fast the six optional days from the month of Shawwaal, and this has a great reward of which the Prophet

Therefore, if someone were to fast these six days, it would be as if he fasted for the entire year, just as the Prophet

explained to his Companions, may Allah be pleased with them. The Islamic scholars have clarified the confusion as to why in particular they are six days from month of Shawwaal, which is the month that follows Ramadan, by stating that if one fasts during these six days as well as the month of Ramadan, then it is as if he has fasted the equivalent of a year's mandatory fasting. This is because these six days he fasts are connected to the month of Ramadan, which is a month of mandatory fasts and these are certainly more rewarding than optional ones. Allah The Almighty distinguishes and favors certain days and months over others as He wishes, and this is exemplified by the fact that He has made fasting the Day of ‘Arafah expiate the sins of two years and fasting ‘Aashooraa’ expiate those of one year.

There is no problem if one chooses to fast these six days in a non-continuous manner during this month but if he fasts them consecutively it would be better, lest he becomes lazy; it is also better so that he can hasten in attaining the reward. As for the one who has to make up for some days in Ramadan that he missed, he must make them up first and then fast the optional days, because the narration indicates fasting them after finishing the fasting of Ramadan completely. However, some scholars are of the opinion that it is permissible to fast these six days before making up the missed days of Ramadan. Women who are in post-partum bleeding and who were sincere in their intention of fasting these days had they not been in this condition will not be deprived of the great reward.

Now that you know this, it becomes incumbent on you to put it into practice, for you have tasted the sweetness of worship and closeness to Allah The Almighty in Ramadan, do not therefore, ruin that with your sins. Moreover, the continued observation of acts of worship or negligence in them is an indication of the inner-workings of the heart, for it is the most changeable organ in the human body. That is why the Prophet

said: “The heart was given that name because of its inconstancy. The similitude of the heart is like that of a feather at the bottom of a tree which the wind blows hither and thither.” [Ahmad] The Messenger of Allah

used to say in his supplication: “O turner of the hearts! Establish my heart firmly on your religion.”