The easiest part of fasting is abandoning food and drink - I 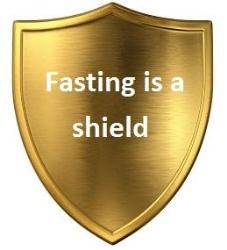 for your advent, O you who are the dearest guest to our hearts and whose bounty and favor overwhelmed us.

We should receive Ramadan first with praising and thanking Allah The Almighty, being happy and rejoicing at this great season and repenting from all sins and acts of disobedience. Who among the slaves of Allah never committed any sins?

Moreover, one should release his liability from grievances, return the rights to their owners and work on benefiting from the days and nights of Ramadan in righteousness and reforming the self.

The people of fasting:

Some people are ignorant of the reality of fasting as they confine it to refraining from food and drink. The fasting of some of them does not prevent them from using their tongues in backbiting, tale bearing, lying and engaging in falsehood. They leave their ears and eyes free to commit sins and acts of disobedience. The Prophet

said: "Whoever does not give up false speech and acting upon it, Allah Has no need of him giving up his food and drink." [Al-Bukhari]

Those who receive Ramadan as the month of hunger, sleeping and deprivation during the day, satiation and staying up late at night and words that do not exceed the tongue and never construct their gardens in Paradise; such will never benefit from its grants nor attain its goodness.

But those who receive it as a school to acquire faith, a station to discipline morals and behavior and strengthen consciences and souls and a serious start for a better life and a more perfect future are the ones who really invest it. They started the procession and prepared for it in order to be exposed to its fragrance and to attain its goodness and blessings. Those are the ones who deserve mercy, goodness, and grants and who are given glad tidings of the comfort of the gardens of Paradise. Those, Allah willing, are upon whom we depend, after the guidance of Allah The Exalted, with regards to reforming the conditions, bringing about victory and honor and winning rounds in making people happy and facing challenges.

Allah The Almighty Says (what means): {Those who do not know say, “Why does Allah not speak to us or there come to us a sign?” Thus spoke those before them like their words. Their hearts resemble each other. We have shown clearly the signs to a people who are certain [in faith].} [Quran 2:118] This verse informs us about the resemblance between the past centuries – despite the change of environments, images and civilizations – and the Prophet

and the Messengers before him. This resemblance is attributed to the fact that it is the same leader. He did not change in spite of all the changes. It is Iblees (Satan) who was quoted by Allah The Almighty as saying (what means): {[Satan] said, "Because You have put me in error, I will surely sit in wait for them on Your straight path. Then I will come to them from before them and from behind them and on their right and on their left, and You will not find most of them grateful [to You]."} [Quran 7:16-17] This is the slogan he raised. He is with us at night and day all throughout the year except in this noble month as he is separated from his beloved "the evil enjoiner self" to go to his prison leaving it to face its destination alone. The Prophet

said: "When the first night of the month of Ramadan comes, the devils and rebellious Jinn are chained." [At-Tirmithi] This self weakens because its leader is shackled and imprisoned.
In addition, it is with a person who is going to perform the worship of fasting which grants him the potentials that increase its weakness and kill the evil therein like lack of food and drink and being away from desires. He launches the good aspect that it tried with Iblees to bury and obliterate throughout the year and rather to eliminate it in order to tear down the divine flag, deform the organs of the body and keep them slaves to its desires.

In the month of Ramadan, matters become different as the leader is imprisoned and the self is tired from the weakness of its elements. The Muslim is the master of the situation in attack and retreat. Therefore, he should be a skillful leader to eliminate the evil of his own self and dress it with the raiment of goodness. Allah The Almighty Says (what means): {And [by] the soul and He who proportioned it. And inspired it [with discernment of] its wickedness and its righteousness, He has succeeded who purifies it, and he has failed who instills it [with corruption].} [Quran 91:7-10] He launches the energies of good within himself so that he succeeds. Thus, when his devil gets out of his prison to visit his past ally; he finds that it has become an enemy which is ready to combat him and therefore victory takes place. From Allah only comes help.