The virtues and rewards of prayer in Islam 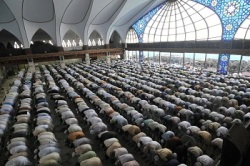 ascended to the heavens, while the commands for the remaining acts of worship were revealed to the Prophet

on earth. This indicates the special status and importance of prayer as an act of worship.

• It is the only pillar of Islam that is repeated five times each day, and is never waived except for the woman during her menstrual period and post-partum bleeding.

• It is one of the most virtuous deeds, and most beloved to Allah as the Prophet

said: “Know that the best of your deeds are your prayers, and only a true believer maintains the state of ablution.” [Ahmad]

• It is the backbone of one’s religion, and the coolness of the eyes of the righteous. The Prophet

said: “The most important of all matters is Islam, its spinal cord is prayer and the highest rank is Jihad for the sake of Allah.” [Ahmad]

• It is an indication of Islam and belief, and preserves a person’s blood from being shed, Allah The Almighty Says (what means): {But if they repent, establish prayer, and give zakha, then they are your brothers in religion; and We detail the verses for a people who know} [Quran, 9: 11]

• It is a sign of honesty and frees a person from hypocrisy. The Prophet

said: “Whosoever prays forty days with the congregation, attending the initial (Allahu Akbar) of the prayer, will be free of two things: Hell Fire and hypocrisy.” [Ahmad]

• It is the best issue to be occupied with, the most profitable dealing, and the most likely amongst all acts of worship to cause the person to become humble and submissive. The Prophet

said: “Prayer is the best thing to be occupied with, so perform as much of it as you can.” [Ahmad]

• It is a command from Allah The Almighty, Who Says (what means): {Maintain with care the [obligatory] prayers and [in particular] the middle prayer and stand before Allah, devoutly obedient} [Quran 2: 238]

• It elevates a person's ranks and expiates sins, as the Prophet

said: “Tell me, if there is an overflowing river in front of the house of one of you in which he baths five times a day, will there remain any dirt on him? They said, ‘No dirt will remain on him’. He

then said: “That is the example of the five daily obligatory prayers by which Allah erases sins.” [Al-Bukhari and Muslim]

• It rescues from Hell, protects against danger, and enables a person to win Paradise. The Prophet

said: “The one who prays before sunrise (Fajr prayer) and before sun set (Asr prayer) will not enter Hell Fire.” [Muslim]

• It is a sign of success and victory, and an indication of being accepted. Allah The Almighty Says (what means): {Certainly will the believers have succeeded: They who are during their prayer humbly submissive} [Quran 23: 1-2]

{And they who carefully maintain their prayers - Those are the inheritors who will inherit Al-Firdaus. They will abide therein eternally} [Quran 23: 9-11]

• It is the first thing for which the slave will be held accountable. The Prophet

said: “O Bilal! Call the Iqamah in order for our hearts to relax.” [Ahmad and Abu Dawood].

• It frustrates Satan and disbelievers. The Prophet

• It is a form of expressing appreciation and gratitude, as well as being a treasure full of the exaltation of Allah The Almighty and glorification and praise to Him. When the Prophet

was asked about the reason behind his excessive prayer, he

said: “Should I not be a thankful slave?” [Al-Bukhari and Muslim]

• It protects against following desires, evil sins and cures from sicknesses, as Allah The Almighty Says (what means): {Indeed, prayer prohibits immorality and wrongdoing} [Quran 29: 45] The Prophet

said: “Pray the optional night prayer, because it is the way of righteous people before you, it brings you close to your Lord, prevents you from committing sins, expiates your sins and cures you from sicknesses.” [Imam Tirmithi]

The Bestowal of Friday upon the Ummah of Muhammad

The audacity of faith

Tips on safeguarding and improving your prayers

The Bestowal of Friday upon the Ummah of Muhammad

Allah, The Exalted, endowed the Ummah of Muhammad with distinct characteristics – in this worldly life and the Hereafter – that were not conferred upon any of the nations before it. Although...More