HRW: Use of barrel bombs increasing in Syria 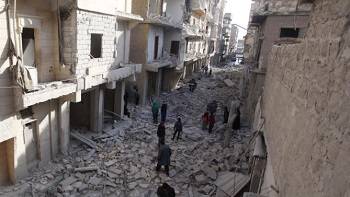 Human Rights Watch says it has evidence that Syrian regime forces have carried out hundreds of indiscriminate attacks over the past year with air-delivered munitions, including improvised weapons such as barrel bombs.

The US-based group says the attacks have had a devastating impact on civilians, killing or injuring thousands of people.

Barrel bombs are crudely made containers filled with nails, metal shrapnel and explosive which are dropped from helicopters.

Regime forces have repeatedly been accused on using these munitions during the war despite a UN resolution last year banning their indiscriminate use in populated areas.

People inspect a site hit by a barrel bomb, dropped by forces loyal to Syria's President Bashar al-Assad, in the al-Myassar neighborhood of Aleppo, February 7, 2015.