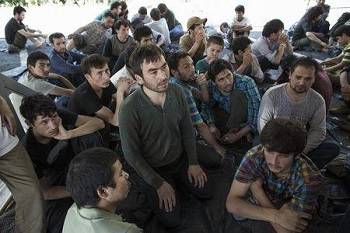 In recent months, cafes in Istanbul's working-class Zeytinburnu neighborhood have begun to attract growing numbers of young, ethnic Uighur men. Some speak quietly - wary of a rumored network of Chinese informants - about politics in their homeland, China's Xinjiang Province.

"We were tortured and starved there," said Yusuf, now in his middle age, speaking of the 17 years he said he spent in a Chinese prison for his involvement in an outlawed secessionist movement, which he refused to name. "China has been oppressing us for the last hundred years, and we come here for our freedom," said Yusuf, adding that his actions as part of the secessionist movement were never violent.

Yusuf, who asked that his last name not be used to protect his identity, is among hundreds - perhaps thousands - of Muslim Uighurs to have fled China for Turkey since the Chinese government began a wide-ranging crackdown in Xinjiang last year.

The Muslim-majority province is a vast, resource-rich region of economic and strategic importance to Beijing, which has sought to prevent Uighurs from practicing their religion and culture in a bid to assimilate them. In Xinjiang, fasting during the Muslim month of Ramadan is illegal for students and public workers, the use of the Uighur language is restricted, and Uighur separatists have been subjected to imprisonment and torture.

Uighur nationalist organizations have a wide array of tactics and visions. Many are non-violent and promote a moderate political agenda, while others, like the East Turkestan Islamic Movement, have been responsible for deadly attacks across China, and have been labeled as terrorist organizations by China and the United States.

China's Uighurs have long looked westward towards the central Asian states and Turkey, whose people share linguistic and cultural similarities with them. "[Uighurs] know they're very well-welcomed by their Turkish brothers," said Alessandro Rippa, an anthropology doctoral candidate at Aberdeen University who focuses on Uighurs.

No official statistics exist on the number of Uighurs currently living in Turkey, though most estimates by Uighur organizations put the number in the tens of thousands. In January alone, Turkey helped to shelter some 500 Uighurs coming from Malaysia and Thailand.

Hidayetullah Gokturk, a politically active Uighur who grew up in Istanbul but now lives mainly in Saudi Arabia, said he remembers a time when Uighurs were referred to as "bad refugees" by many Turks. "That was 30 or 40 years ago," he said. "Now when we tell people we are Uighur, they say, 'you are even more Turkish than us'. They value us so much."

After the 2009 ethnic riots in Xinjiang's capital of Urumqi left nearly 200 people dead, Turkish leaders swiftly voiced condemnation of the Chinese government. President Recep Tayyip Erdogan, then prime minister, went so far as to liken the plight of the Uighurs to a genocide.

"Turkey was brave, and we respect this," said Seyit Tumturk, vice president of the World Uyghur Congress, an organization of Uighur nationalist groups. "Most of the world is quiet for their own economic and political benefits."

But as China continues to peg its crackdown in Xinjiang to the global fight against ‘terror’, Turkey's decision to shelter fleeing Uighurs could prompt a political backlash.

Turkey has found itself in a knotty political situation, as it increasingly identifies with a pan-Turkic and pan-Muslim political vision that includes supporting the Uighurs. Turkish officials have made several high-profile trips to Xinjiang province over the last few years, which many view as an act of solidarity with the Uighurs.

But at the same time, the Turkish government has been working to increase its economic ties with far eastern countries, especially China. In the past decade, Turkish-Chinese military and trade relations have grown, and Turkey has declared its desire to join the Shanghai Cooperation Organization.

Meanwhile, China has sought to a stop what officials call the "underground railway" by which Uighurs flee the country. The journey has become more difficult recently, as China has pressured neighboring countries like Afghanistan to deport Chinese Uighurs living there. These days, many Uighurs pass through several countries before reaching Malaysia or Thailand, where they acquire fake passports in order to travel to Turkey.

In January, 10 Turkish citizens and two Chinese Uighurs were charged with attempting to smuggle people out of China. A

Chinese state-run media outlet tied the smuggling ring to ‘terrorist’ activities, but an account from the Turkish foreign ministry, which made no mention of terror charges, has cast doubts on China's narrative.

Since last March, Turkey and China have been engaged in a tug-of-war over the fate of Uighurs found on a Thailand rubber plantation, who apparently sought to travel to Turkey.

China requested that the hundreds of Uighurs be extradited, but Turkey's foreign ministry announced its willingness to host them instead. In response, China's foreign ministry issued a statement last November urging Turkey not to meddle in its affairs.

While a recent Pew poll suggests that nearly 70 percent of Turks have unfavorable views of China - likely a result, at least in part, of the Uighur issue - Uighur activists fear that the recent economic partnership with China has dampened enthusiasm for their cause among Turkey's political elite.

Some supporters of Turkey's ruling Justice and Development Party, including the prominent pro-government columnist Ergun Diler, have cautioned against allowing the Uighur issue to risk souring their country's strong relationship with China.

Kemal Kilicdaroglu, the leader of the Republican People's Party, Turkey's biggest opposition party, has praised Turkey's strategic relationship with Beijing and has referred to Uighurs as a "bridge" between the two countries.

"The Uighur issue in China-Turkish relations occasionally rears its head when news items such as the Uighurs currently being held in Thailand or the 2009 Urumqi riots hit the headlines," said Kendrick Kuo, a China specialist and founder of the China Crescent blog. "But it doesn't take long for the heat to subside."

Though they may enjoy the sympathy of the Turkish public, Uighur activists say China's crackdown has been met with resounding silence from elsewhere in the international community. "When anyone is killed in Palestine, it is known by everyone all over the world. But when … people are killed in East Turkestan, nobody knows about it," said Yusuf, using the name Uighur nationalists use to refer to Xinjiang province.

Many Uighur activists believe that international support - even from the country they so admire - is likely to be limited, a fact that causes dismay. "When I was an activist, we didn't expect any help from anyone, from Turkey or any other country," Yusuf said.

"We always saw ourselves as abandoned. Alone."

Uighurs from China's region of Xinjiang, sit inside a temporary shelter after they were detained at the immigration regional headquarters near the Thailand-Malaysia border in Hat Yai, Songkla March 14, 2014.