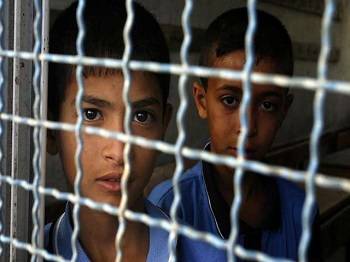 The Palestinian Prisoners Society said in a statement "Most of the Palestinian minors are detained in Ofer detention center near Ramallah and Megiddo and Sharon prisons in northern Israel."

According to the NGO, arrest campaigns against Palestinian minors increased after mid-2014, particularly after recent tension in Jerusalem where hundreds of children have been detained for various periods of time.

Al-Khalil (Hebron) came in the second place among Palestinian provinces in terms of the number of detained minors after East Jerusalem.

"At least 70 Palestinian children have been detained in Al-Khalil since the beginning of 2015," the statement said.