Israeli troops told to 'kill on sight' in Gaza war 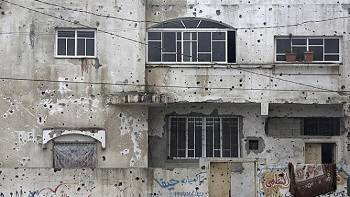 An Israeli NGO expressed concern on Monday over the Israeli army's "indiscriminate fire" policy against Palestinians after collecting testimony suggesting that soldiers were ordered to "kill on sight" during last summer's military onslaught on the Gaza Strip.

In a Sunday statement, Breaking the Silence, an Israeli NGO, said that testimonies that it had collected painted a "troubling picture" of the Israeli army's policy of "indiscriminate fire," which, it asserted, had "directly resulted in the deaths of hundreds of innocent Palestinian civilians."

The NGO said it had collected testimony from 60 Israeli soldiers and officers who had participated in last summer's offensive – dubbed "Operation Protective Edge" – against the Gaza Strip.

More than 2,160 Palestinians, mostly civilians, were killed – and another 11,000 injured – during seven weeks of unrelenting Israeli bombardments across the Gaza Strip in July and August of last year.

"Testimonies collected by Breaking the Silence paint a troubling picture of a drastic change" in the Israeli army's combat procedures, the NGO said.

It added that the Israeli army's "guiding values – such as the 'purity of arms' principle, which mandates that soldiers use the minimum amount of force necessary and 'maintain their humanity even in combat' – were devalued, and even discarded, by the Israeli army itself."

The NGO said "the rules of engagement" relayed to soldiers "were the most permissive Breaking the Silence has ever heard," adding that numerous soldiers had testified that "the orders they received were to shoot to kill every person sighted in the area."

It went on to assert that Israeli soldiers had been misled in some cases into believing that the army's combat activities were taking place in areas devoid of civilians, when, "in reality, the [army] forces entered areas in which innocent civilians, and sometimes even entire families, remained."

During the seven-week onslaught against Gaza, the Israeli army "carried out mass destruction of civilian infrastructure and homes," the NGO noted, adding that, "in many cases, the destruction occurred without any clear operational justification and after ground forces had already 'cleared' and left the area."

Breaking the Silence was founded by Israeli veterans who have served in the army since the second Palestinian intifada (uprising), which erupted in late 2000.

According to the NGO's website, these veterans "have taken it upon themselves to expose the Israeli public to the reality of everyday life in the Occupied Territories."

It states: "We endeavor to stimulate public debate about the price paid for a reality in which young soldiers face a civilian population on a daily basis and are engaged in the control of that population's everyday life."