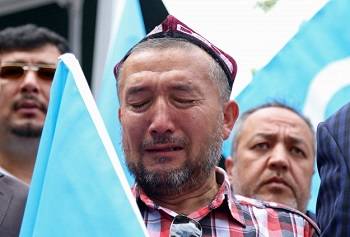 The World Uyghur Congress has used a reported ban on Muslims fasting to ratchet up the rhetoric on China, this time accusing Beijing of "an unnamed war against Muslims and Islam."

"Unfortunately the world is still keeping silent," the Vice President of the Congress Seyit Tumturk told Anadolu Agency this week.

According to international media reports, the country has banned Ramadan in parts of the Xinjiang Uyghur Autonomous Region for Muslim Party members, civil servants, students and teachers.

Tumturk called the area the only Muslim region in the world where people are prohibited to practice Ramadan fasting.

This year's apparent attempts to control fasting are not the country's first.

"It was the same last year," he claimed. "Around 3000 Uighur were massacred on the first day of Ramadan fast when they took to the streets protesting the prohibition."

He accused China of challenging the world with its "massacre" and "psychological pressure" of the people of "East Turkistan."

Many Turks refer to the Xinjiang Autonomous Region - the home to many ethnic minority groups, including the Turkic Uighur people - as East Turkestan.

They believe that Uighur are among a number of Turkic tribes that inhabit the region, and consider it to be part of Central Asia, not China.

"China has been carrying out a systematic assimilation policy for 66 years, when it invaded East Turkistan," Tumturk said, adding that Beijing had been oppressing Uighur for decades, preventing them practicing their religion and culture, "while the world stayed silent."

He criticized the Organization of Islamic Cooperation for not acting against the "Chinese cruelty."