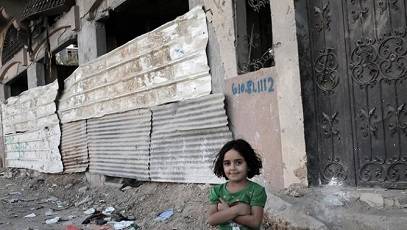 At least 23 Palestinians have been killed and another 2,156 detained by the Israeli military since January 1, 2015, the Palestine Liberation Organization (PLO) said in a report issued Sunday.

In its report, the PLO added that 131 Palestinian homes had been destroyed in armed operations carried out by the Israeli army in the first half of this year alone.

The report noted that the Israeli army killed at least 42 Palestinians in the same period of 2014.

In July and August of last year, more than 2,150 Palestinians were killed and 11,000 injured -- mostly women and children -- during a 51-day Israeli military onslaught against the blockaded Gaza Strip.

Four years old Nisma Shamali poses in front of her family's home in a corrugated sheet-covered building which was damaged during the 2014 Israeli military onslaught against the blockaded Gaza Strip, nearly a year later in the Al Shejaeiya neighborhood in the east of Gaza City, Gaza Strip, 04 July 2015.