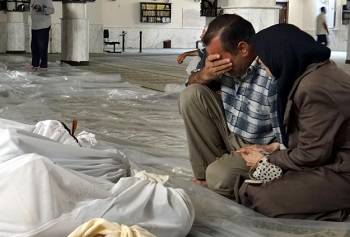 On the second anniversary of the notorious Ghouta chemical massacre in Syria, survivors recount what happened on that fateful day.

More than 1,400 civilians were killed, most of whom women and children, according to local and international human rights organizations.

Mohamed al-Shami, from Zamalka, Ghouta, told Anadolu Agency: “We did not sleep that night from the sound of missiles raining down upon us. At first, we thought they were missiles or mortar bombs, thankful that they were not hitting us. Then we heard someone shout in the street ‘Chemical attack! Chemical attack!’ Everyone heard the news and climbed up on the roofs of their houses to avoid the effects of the poisonous gas around us.”

Al-Shami and a group of friends went outside and began knocking on doors to alert residents to escape.

They broke down the doors when they did not get a response, he said, only to find entire families lying lifeless on the floors of their own homes.

“Hundreds were killed,” said Abu Uday, another Ghouta resident. “Some of them died in the medical centers where they were carried to. The number of victims exceeded 1,000.”

His child, Uday, said: “We were asleep when we smelt a strange smell and heard voices from outside shouting: ‘People! Get up! Get up! Chemical attack! Chemical attack!’ We woke up and hurried to the roof of the house, where we saw missiles falling all around us. It was then that my mother passed out and we began to feel dizzy. We went out onto the road and an ambulance carried us to two medical points.”

“After I inhaled oxygen, I started listening to the sound of mosque speakerphones announcing the victims’ names; three of them were my relatives,” he said.

Ahmed Asma, another child, said: “When our city was attacked, we were carried to the hospitals. After we recovered a little, we escaped the city. When we returned, I found out that all my friends were dead.”

Syrian opposition forces and human rights organizations accuse the Assad regime of perpetrating the atrocity – a claim denied by the regime.

Since March 2011, the Syrian opposition has demanded an end to more than 44 years of Assad family rule and the establishment of a democratic state.

The Syrian regime responded to the peaceful protests with military force, pushing the country into a vicious downward spiral of violence, bloody battles and a civil war that is still ongoing between the regime and opposition forces.