How tens of thousands of Syrians have 'disappeared' 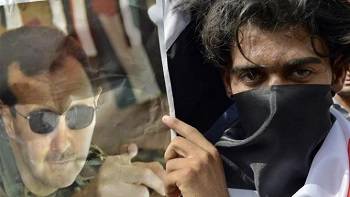 Two years after her father, human rights lawyer Khalil Matouq, suffered the same fate, Raneem was kidnapped by Syrian authorities in 2014. She was released after two months in detention, while her father remains missing to this day.

For Raneem, the worst part is knowing what conditions her father faces in Syria's prisons.

"Our cell was in this corridor, and usually they take the men and children to ask them questions, and when they torture them, we would hear the screaming all the time," Raneem told Al Jazeera, noting she was beaten by guards and, through a window in her cell door, saw dead bodies in the corridors. In one of the most horrific methods of torture, Raneem said, prisoners were strapped to a chair, the back of which was pulled downwards, snapping the spine.

When she was ultimately released under a presidential amnesty, Raneem said, it was cold comfort. Her father's continuing absence has left a hole in the family.

"When we were in Syria, it was really hard because he was protecting us from everything in the war. We were trying to be like him in detention, not eating so much, feeling cold because we didn't know if he was cold or warm... It's not easy, because I have a picture of what's going on [in prison]," Raneem said.
"Sometimes our imagination is infinite."

The Syrian regime has forcibly disappeared more than 65,000 people since the war broke out in 2011, according to a new report from Amnesty International, which cites an "organized" and "systematic" campaign by the state security apparatus to silence dissent.

An enforced disappearance occurs when someone is abducted by state agents, who then conceal the person's whereabouts, denying them legal protections. The scale and scope of this practice in Syria amounts to crimes against humanity, the Amnesty report concluded, mirroring previous findings from the United Nations.

Amnesty's report, Between Prison and the Grave, found that enforced disappearances have been carried out by all four branches of the Syrian security forces, as well as by the armed forces and militias associated with the Syrian regime.

The Syrian Network for Human Rights, a local monitoring group, has documented 65,116 cases of enforced disappearances - including 58,148 civilians - between March 2011 and August 2015. The actual number is believed to be even higher, as many Syrians are reluctant to publicly discuss the issue for fear they, too, could be targeted.

"Since 2011, the Syrian regime has carried out an orchestrated campaign of enforced disappearances," the report stated. "At the beginning of the crisis it arrested and forcibly disappeared large numbers of peaceful opponents of the regime, including demonstrators, political activists, human rights defenders, media workers, doctors and humanitarian aid workers.

"As the conflict evolved, so too did the regime's strategy," the report continued. "It forcibly disappeared those it considered to be disloyal, such as defectors, as well as regime employees or soldiers who were believed to be considering defection. The regime also began forcibly disappearing family members of individuals wanted by the security forces, usually in an effort to dissuade these wanted individuals from continuing their political activism or military activities."

Those subjected to enforced disappearance face horrific conditions in prison, and are routinely tortured with electric shocks, beatings, burnings, and sexual violence, noted the report, which relied on testimony from dozens of friends and family members of disappeared Syrians, former prisoners, investigators, analysts and monitors.

The practice has become so common that a black market has emerged, in which "brokers" with close ties to Syrian authorities offer to provide information to family members on their disappeared relatives in return for a fee, ranging from hundreds of dollars to tens of thousands. Sometimes, the only information available is that the person is dead.

Nicolette Boehland, a Syria researcher at Amnesty International, told Al Jazeera that the Syrian public is paying a "huge price" for this campaign.

"The social fabric in Syria has been destroyed by this campaign of enforced disappearance. Countless families have been left without their fathers, mothers, sons, daughters. The cumulative effect of this cannot be underestimated," Boehland said.

"This campaign of disappearances has also terrorized the civilian population and silenced them, as many families fear that doing anything that could be interpreted as opposing the Syrian regime could lead to further harm to or the death of their disappeared relatives... The regime has, in effect, held large parts of the civilian population in Syria hostage."

Amnesty's report identified three main profiles of people targeted for enforced disappearances, including peaceful opponents of the government, individuals considered disloyal to the government, and family members of people wanted by the state.

"Anticipating that the Syrian regime will continue to commit these crimes against humanity with impunity, we are calling on states that support Syria, such as Russia and Iran, to press the regime to end its brutal campaign of enforced disappearance," Boehland said.

Meanwhile, Raneem's family will continue to wait, and to hope that one day Khalil will be freed.

"It's crazy, but sometimes we try to contact [my father] with dreams... Sometimes he speaks to us," she said.

"Sometimes he tells us how he's doing and how he's feeling, [and] in some dreams, he seems strong," she added. "We always have this hope."

A pro-regime Syrian carries a picture of Syrian President Bashar al-Assad, during a rally in front of the Russian Embassy in Beirut, Lebanon, 18 October 2015.