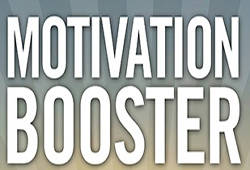 In the two previous articles, we have discussed some motivation boosters, the last of which we shall mention here:

1- Turning away from a dispiriting environment

Shaykh Muhammad Ismaa‘eel Al-Muqaddim, may Allah preserve him, said: "Man is greatly influenced by his surroundings. If he lives in a frustrating environment where lethargy, slackness and meanness are encouraged, he must abandon that and move elsewhere where he would be highly motivated. Only when he leaves behind such conditions will he get rid of its influence and enjoy the opportunity to realize distinguished objectives."

This is particularly applicable for one who has just repented, as changing his or her surroundings will stimulate motivation, which he or she is in need of, more than other believers. Turning away from an environment of disobedience to that of worship is likely to help in overcoming what initially enticed him or her toward wicked companions and bad places. Hence, he or she will be able to start anew and, with strong willpower and firm determination, adopt a transformed lifestyle.

It is a fact that a person is influenced by the wayward around him or her in the same manner that water is contaminated and changed by rotting meat that may be beside it. Therefore, a person must flee from an environment of weariness, laziness and callousness.

2- Keeping company with people known for their drive

As mentioned above, there is unanimous agreement that people are influenced by those around them. Hence, a person should befriend the righteous and those who are competitive [in doing good], and avoid the company of the wicked and evil, for a person is surely known by his or her companions. He or she must spend time with those who encourage him or her to worship Allah The Almighty, not those who do the opposite.

Moreover, it is undeniable that even looking at the righteous raises one’s morale, just as spending time with them and listening to their words of advice has a great effect. For example, upon seeing Wakee’ ibn Al-Jarraah

people used to say: "This is an angel!" Likewise, every time they encountered Muhammad ibn Seereen

they used to glorify Allah The Almighty because of the light [of piety] on his face. Al-Fudhayl ibn ‘Iyaadh

explains: "When a believer looks at another believer, it purifies the heart; however, when a person looks at a heretic innovator, it leads to [its] blindness. Indeed, the person who keeps company with one who introduces new traditions in religion is deprived of wisdom."

once remarked: "Every time I look at Al-Fudhayl

my sadness and hatred for myself are renewed [because of his excellence in faith]"; he then burst into tears. A person should befriend those who are highly motivated and benefit from their morals and characteristics, if he or she can not be like them him/herself. Allah The Almighty Says (what means): {And when [other] relatives and orphans and the needy are present at the [time of] division, then provide for them [something] out of the estate and speak to them words of appropriate kindness.} [Quran 4:8]

If a person sincerely wants good company, he or she must stand up and take the initiative. He or she should not think that this is difficult because the One Whose help is sought is Allah The Omnipotent. A person must approach The One who has given to others that which he is seeking for himself, for He is his Lord, just as He is theirs. Allah The Almighty taught Al-Khidhr what was concealed from Moosa (Moses), and revealed to Sulaymaan (Solomon) what was unknown to Daawood (David), may Allah exalt the mention of them all.

These characteristics, along with conviction, certainly help a person attain an exalted degree of piety. Indeed, a person who tastes the sweetness of good health cares little about the bitterness of patience, when, in fact, the capacity for this in believers transforms them into religious leaders. As for one who sees the path as stretched, walks slowly because of his or her low motivation. Thus, a person should remain steadfast in clinging to the truth and to faith, after sensing its beauty and tasting its sweetness. Allah The Almighty Says (what means): {O you who have believed, persevere and endure and remain stationed and fear Allah that you may be successful.} [Quran 3:200]

Seclusion helps a person contemplate and think; it purifies the heart from anything that might keep it away from the Lord. Abu Haamid Al-Ghazaali

said: "A man feels forlorn and at a loss with himself when he is devoid of virtues; he therefore intensifies socializing with others to get rid of that loneliness by their company."

Some scholars say that there should be times when a person isolates him/herself to supplicate to Allah, remember Him, pray, reflect, call him/herself to account, reform the heart and address private matters that require solitude. ‘Abdullaah ibn Ahmad ibn Hanbal

used to say: "My father was the most persevering in his [self-imposed] seclusion." He

further recounts: "No one saw my father except in the mosque, at a funeral or while visiting a sick person; and he hated wandering in markets."

Some virtuous personalities have been reported to have said: "Anyone who wants to influence the human existence and transform it, must spend some time in solitude, away from the clamor of everyday life and people’s problems. There must be a period of meditation, reflection and contemplating this vast universe and its innumerable characteristics.”

There are many benefits in such seclusion, some of which are: protection from the evil of the tongue, fortification of the heart from hypocrisy, discovery of the delightfulness of obedience [to Allah The Almighty], safeguarding the sight and attaining peace in the heart, asceticism and contentment and ability to worship through contemplation and meditation.

5- Reading the biographies of those who are highly motivated

Studying the life stories of great, sincere scholars and well-known righteous people is one of the best means of encouraging virtue in oneself, for it teaches the ability to endure hardship and difficulties for the sake of noble intents and sublime goals. Moreover, it encourages a person to follow in the footsteps of those who made great sacrifices and were highly motivated to rise to the highest of ranks.

would say: "Stories of the righteous [are like] among the soldiers of Allah that He uses to strengthen the faith of those who seek to be close to Him." When it was inquired if any authentic reference validated that theory, he replied: "That is supported by the verse where Allah The Almighty Says (what means): {And each [story] We relate to you from the news of the messengers is that by which We make firm your heart.} [Quran 11:120]"

Thus, learning everything about the righteous is the finest method of strengthening resolve, stimulating ambition, promoting enthusiasm, discovering talents, reforming a person’s morals and increasing motivation. Yet, we are not alluding to a mere narration of stories and tales, with neither understanding nor beneficial knowledge. Rather, we mean shedding light on good role models a Muslim can imitate in terms of morality and religion, as well as in words and deeds.

said: "The path for a man who seeks perfection in pursuing knowledge is in reading beneficial books; let him read a lot and then he will discern the knowledge and high morale of those people, which will energize him and motivate him in his determination to be hard working." Therefore, all people should pay attention to the biographies of the righteous predecessors, read their books and learn everything about them, because perusing their works will give us an insight into their personalities.

In sum, these are some motivation boosters. We advise you to apply them with patience and we ask Allah The Almighty to make these of benefit to all of us.