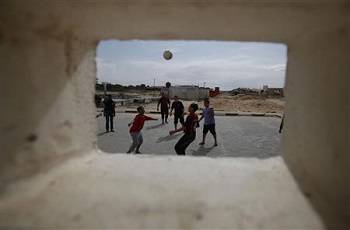 Israeli forces have killed more Palestinian children in the occupied West Bank and Jerusalem in 2016 than any other year in the last decade, rights group Defense for Children International (DCI) has said.

The organization’s chapter in the occupied Palestinian territories recorded the killings of 32 Palestinian children (under 18), making 2016 "the deadliest year of the past decade" for them, the group said in a recent report.

Many of those killings happened during Israeli military raids on Palestinian towns in the occupied West Bank, confrontations with the Israeli army or during unarmed protests.

"Israeli soldiers employ a shoot-to-kill policy. They have the green light to kill Palestinians, and the fact that they can do so with impunity and no consequences builds the foundation for such shootings to take place," Ayed Abu Eqtaish, Accountability Programme Director at DCI-Palestine, told Al Jazeera.

Since October 2015, Israeli soldiers and settlers have been responsible for the killing of at least 244 Palestinians, including unarmed demonstrators, bystanders and alleged attackers in what has been termed the "Jerusalem intifada" or Jerusalem uprising.

Thirty-six Israelis have also been killed in stabbing and shooting incidents carried out by Palestinians.

"Due to the political situation, especially the Jerusalem uprising since October 2015, the numbers have gone up with tension and clashes between the Israeli army and Palestinians increasing," said Abu Eqtaish.

In 2015, the total number of civilians under the age of 18 killed in the occupied West Bank and East Jerusalem stood at 28. In 2014, 13 Palestinian children were killed, while four were killed in 2013.

"It is very rare that any investigations are opened on the killings. There has only been one incident in 2014 - that of Nadim Nuwara - in which a soldier was charged," said Abu Eqtaish.

The Israeli was charged with manslaughter, but his lawyers recently told Israeli media the charges may be dropped.

Fifteen-year-old Faris al-Bayed from the Jalazone refugee camp north of Ramallah in the West Bank was another victim of Israeli army aggression. Al-Bayed was killed on October 15 last year when Israeli soldiers shot a rubber-coated metal bullet at his head, which eventually resulted in his death.

Regulations for the use of rubber-coated metal bullets, also known as "rubber bullets", stipulate that the projectiles are meant for dispersing crowds, must be fired from at least 40 meters away at the lower body, and not at children.

Al-Bayed was attending a march near the camp to commemorate the killing of 14-year-old Ahmad Sharaka when he was shot. He remained in intensive care for 67 days in a coma before he passed away.

Abu Mohammad believes the upcoming generations are now more aware than their parents, and are thus being increasingly targeted by Israeli forces.

"There are killings, raids and detentions everyday. It never used to be like this. With the coming of the internet and more awareness, the children are becoming more nationalistic and are aware of what is happening," said Abu Mohammad.

"This is the state's racist culture that tells the Israeli army it is ok to kill Palestinians because they're getting rid of 'terrorists' whether it be a man, woman, or child," Abu Helal told Al Jazeera from his Ramallah home.

According to a poll conducted by the Israel Democracy Institute in August, about 47 percent of Jewish Israelis said they supported the killing of Palestinians who carry out an attack on

Israelis, even if he or she had been captured and no longer posed a threat.

A group of human rights NGOs including Amnesty International found that in at least 150 of the cases since October 2015, Israeli forces "killed Palestinians after they no longer posed a threat, killed Palestinians who did not appear to be carrying out an attack at all, or used lethal force to subdue attackers when non-lethal force would have sufficed".

Rights organizations have repeatedly condemned such killings, which they describe as an "excessive use of force" whereby Israeli forces violate international human rights law.

"We know that even if we tried to get the soldier to court, nothing will happen to him. What's the point? There have been thousands of Palestinians killed over the years, and no soldier has been punished," said Abu Mohammad.