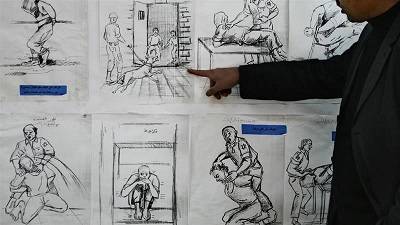 A recent article published by the Israeli newspaper Haaretz has confirmed the extent to which Shin Bet interrogators subject their prisoners to torture.

Methods include slapping the head "to hurt sensitive organs like the nose, ears, brow and lips", forcing a handcuffed individual to squat against a wall for long periods of time, and placing the suspect bent backwards over a chair with his arms and legs cuffed.

Rachel Stroumsa, the executive director of the Public Committee Against Torture in Israel (PCATI), said that her NGO was aware of hundreds of complaints and allegations along these lines.

In addition to interrogation being used to gain information about future acts, "our experience is that torture is also used to obtain confessions regarding past acts", Stroumsa told Al Jazeera.

A representative of Defense for Children International - Palestine told Al Jazeera that the group's research had shown that almost two-thirds of Palestinian children detained in the occupied West Bank by Israeli forces had endured physical violence after their arrest.

Torture and ill-treatment are so rife, human rights campaigners say, that convictions of Palestinians for "security offences" are fundamentally unreliable, not least because the abuse is part of a wider lack of due process.

According to one study, as many as 91 percent of Palestinian detainees interrogated by the Shin Bet in the occupied West Bank are held incommunicado for either part or all of their interrogation. Stroumsa says this practice is "an enabling element for torture".

In the military court system, which has a 99 percent conviction rate, Palestinians can be held for 60 days without access to a lawyer - compared with the United States, where the average length of interrogations producing false confessions is 16 hours.

"As Palestinian children continue to experience systematic ill-treatment and denial of due process rights, it becomes evident that military courts have no interest in justice," Abu Qtaish said.

In addition to the torture and lack of access to counsel, Palestinians are asked to sign confession sheets in Hebrew, which they often do not understand. All of this "creates a coercive environment which results in confessions made under duress", Addameer noted.

A recent example is the case of Mohammad el-Halabi, a Gaza-based employee of World Vision who was charged by Israel with funnelling money to Hamas. Halabi, who is being tried in a Beer Sheva civilian court, has protested his innocence, saying that he was tortured by his interrogators. These claims were also made by his lawyers, who Halabi was prevented from seeing for three weeks after his arrest.

The new Haaretz report draws attention to a topic that is not often in the limelight. In November 2015, a video of the interrogation of 13-year-old Ahmad Manasra sparkedoutrage, while Israel's appearance at the United Nations Committee Against Torture last May - which referred to "coerced evidence" being used in courts - also gained coverage.

But many other events fly under the radar. An academic study published in November 2015 in a peer-reviewed medical journal revealed dozens of cases of sexual torture and ill treatment of Palestinian prisoners detained by Israel.

Activists on the ground say that an international spotlight on Israel's torture practices is urgently needed, not least because of the institutionalised nature of the problem.

Although an Israeli Supreme Court ruling in 1999 prohibited "physical means" of interrogation, Shin Bet agents were effectively given impunity for torture and ill-treatment by the so-called "necessity defence" or "ticking bomb" exemption.

According to anti-torture campaigners, this exemption has served as a green light for torture ever since. Since 2001, hundreds of formal complaints have been made against Shin Bet interrogators, but not a single criminal investigation has been opened.

"I think international pressure is essential, and has on some issues proven its efficacy," Stroumsa said.

"It is also the duty of the international community to speak out on abuses, given the massive economic and political support for the State of Israel from abroad."