The October Arab-Israeli War of 1973: What happened? 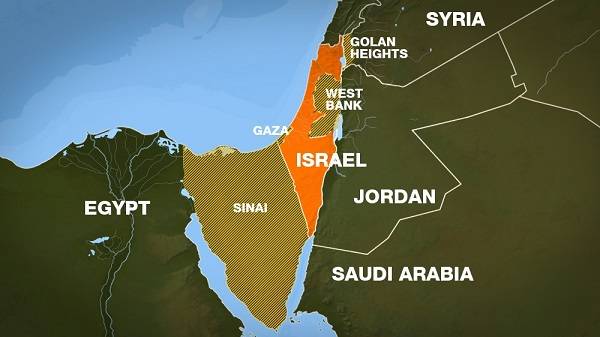 It has been 45 years since the start of the 1973 War between Israel, Egypt and Syria.

The war, known to Israelis as the Yom Kippur War, and to Arabs as the October War, ushered in a new reality in the Arab world and changed the face of US foreign policy towards the Middle East.

Here's a breakdown of what happened:

Why did the three countries go to war?

The conditions that shaped the 1973 War were established six years prior.

In 1967, Israel launched attacks on Egypt, Jordan and Syria, unleashing the June War, that resulted in the Israeli occupation of what remained of historic Palestine, as well as the Egyptian Sinai desert, and the Golan Heights from Syria.

In a matter of six days, the Israeli army delivered a huge setback to the forces of three Arab countries and occupied territory that was three and a half times its size.

The territories that Israel occupied in 1967, shaded in Green.

Fast-forward six years, Egypt and Syria decided to launch a two-front coordinated attack to regain the territory they lost in 1967.

In the background, the politics of the Cold War between the Soviets - who supplied the Arab countries with weapons - and the US - which backed Israel - played out and inflamed the war, bringing the two blocs to the brink of military conflict for the first time since the 1962 Cuban Missile Crisis.

Under Egyptian and Syrian former presidents Anwar Sadat and Hafez al-Assad, the two Arab nations concluded a secret agreement in January 1973 to unify their armies under one command.
Their objectives, however, were markedly different.

Aware that his country's weapons were dated and that it lacked the ability to liberate the Sinai in its entirety in a military operation, just four months after taking power, Sadat had offered the Israelis a peace deal if they would withdraw from Sinai. Golda Meir, the then Israeli prime minister, rebuffed the offer.

So, left to contemplate a war, Sadat found an ally in al-Assad, who had come to power through a coup d'etat in 1970, and he too had a point to prove to his people.

Some accounts claim that the Egyptians were not interested in retrieving land, but merely to engage in peace talks with Israel, in contrast to the Syrians, who wanted to take back the Golan Heights.

"Assad told me that from the moment of his seizure of power, his ambition, his dream, was to avenge the defeat of 1967 when Syria had lost the Golan to Israel and when Assad himself was the defence minister," says Patrick Seale, a British journalist and Hafez al-Assad biographer. "So I think he felt it as a personal responsibility for the recovery of the land. Assad saw the war, which he was planning, as a war of liberation."

Sadat, on the other hand, had sought a limited war to focus the minds of the world's superpowers, and to jump-start the stalled peace process.

How did the war unfold?

To catch Israel off guard, the Egyptians and Syrians decided to launch an attack on the Yom Kippur religious holiday, the only day in the year in which there are no radio or television broadcasts, shops close and transportation shuts down as part of religious observations.

The holiday fell on Saturday, October 6, 1973, and just after 2pm, the Egyptian and Syrian armies, with advanced Soviet weapons, launched a two-front offensive on Israel, from the north and the south.

Under "Operation Badr" the Egyptian military forces managed to cross the Suez Canal and capture the Bar Lev Line - a fortified sand wall on the east bank of the canal.

This initial military success, which came to be known to Egyptians as "the crossing," served as a sign of victory after 25 years of defeat.

On the northern front line, three Syrian infantry divisions crossed the 1967 ceasefire line known as the Purple Line. And, two hours into the war, the Syrians gained their first significant victory when they captured 'Israel's Eye' – a key Israeli vantage point 2,000m above sea level on top of Mount Hermon.

The Israeli losses were heavy and the course of the war seemed to lay squarely within Arab hands.

But in less than 24 hours, Israel had mobilised two armoured divisions, which soon turned the Syrian advance into a retreat. The Israelis advanced, capturing territory deep inside Syria.

As a result, units from the Iraqi, Saudi and Jordanian armies joined the fight on the Syrian front to face the counterattack.

Still, the Israelis manage to achieve significant gains - advancing to within 35km of Damascus, and occupying new territories to bring to the bargaining table.

Both the USSR and the Americans began airlifting arms, including tanks and artillery, to their allies as their stockpiles began to ran out.

On October 16, 10 days after the start of the war, Israeli forces, under the command of Ariel Sharon, managed to penetrate Egyptian and Syrian defence lines and came within a shocking distance from Cairo, the Egyptian capital city.

The counterattack majorly turned the tide of the war in favour of the Israelis, and the fighting came to a stalemate.

On October 17, the Arabs decided to use a different tactic - oil. The Arab oil-producing countries, under the Organisation of Petroleum Exporting Countries (OPEC), decided to reduce their oil production by five percent.

They pledged to "maintain the same rate of reduction each month thereafter until the Israeli forces are fully withdrawn from all Arab territories occupied during the June 1967 War, and the legitimate rights of the Palestinian people are restored".

The Arab countries enforced an embargo on the US, suspending oil supply.

The reduction in oil production and supply led to major price hikes around the world, causing the US to reassess its support for the war.

By the last week of October, the two sides were ready and willing to accept a ceasefire deal.

Estimates put the number of Israeli soldiers killed at 2,600 and 8,800 wounded, significantly larger in proportion compared with the Israeli population at the time, while Egypt was reported to have lost 7,700 men and Syria some 3,500.

Six days later, Israeli and Egyptian military leaders met to negotiate a ceasefire. It was the first meeting between military representatives of the two countries in 25 years. But the negotiations quickly became strained as skirmishes continued in the confusion of the battlefield.

The US then began intensive diplomatic efforts to secure disengagement agreements between Israel, Syria and Egypt, and offered them millions of dollars to reach such deals.

Henry Kissinger, the US secretary of state, flew from country to country in an effort to broker a peace deal, in what came to be known as 'Shuttle Diplomacy' - a new lexicon that had entered the realm of international politics.

On Tuesday, November 6, Kissinger, flew in to Cairo for his first ever meeting with Sadat. Four days later, an initial agreement was signed guaranteeing daily convoys of non-military supplies to the city of Suez and the besieged Egyptian 3rd army.

Four days later, prisoners from both sides were exchanged.

As the New Year arrived, Kissinger returned to the region to hammer out the next step in his grand plan for Egyptian-Israeli disengagement. On January 11, 1974, he arrived in the southern Egyptian city of Aswan to meet Sadat. The next day, he left for Tel Aviv. Both sides accepted a disengagement agreement.

Meanwhile, the Israelis were still occupying a salient deep inside Syria, not far from the capital Damascus. So, in May 1974, Kissinger set out on his second round of shuttle diplomacy, this time between Damascus and Tel Aviv.

After almost a month of hard talking, Kissenger managed to secure a second breakthrough in the region when, on May 28, Israel approved a disengagement agreement with Syria. It was signed in Geneva on June 5, bringing the War in October to an official end after 243 days of fighting.

Egypt and Syria regained a portion of their territory and UN buffer zones were established between them and Israel.
Aftermath of the war

Both the Arabs and Israel declared victory in the war. The Arab countries managed to salvage their defeats after repeated losses in the 1948, 1956 and 1967 wars with Israel.

Within four years, in 1977, Sadat was in Jerusalem giving a speech of peace to the Israeli parliament, the Knesset.

Then US President Jimmy Carter invited both Sadat and former Israeli Prime Minister Menachem Begin to Camp David, a country retreat for the US president near Washington, DC.

The three leaders engaged in secret discussions over 13 days, leading to the signing of the Camp David Accords on September 17, 1978, which laid out conditions for an Egyptian-Israeli peace treaty, and a framework for Israeli-Palestinian peace using Resolution 242.

While the Egyptian-Israeli peace treaty was signed by March 1979 in Washington, DC, the framework never materialised for several reasons, although both sides laid blame on one another. The proposal was vague on the subject of Palestinian refugees, and the key issue - the status of Jerusalem.

Jordan also signed a peace treaty with Israel in 1992, making Egypt and Jordan the only two countries to have normalised relations with Israel, which continues to occupy the West Bank, East Jerusalem, Gaza, and a portion of the Golan Heights to this day.

The territories that Israel occupied in 1967, shaded in Green.