Rohingya: 'Better to kill us in India than deport us to Myanmar' 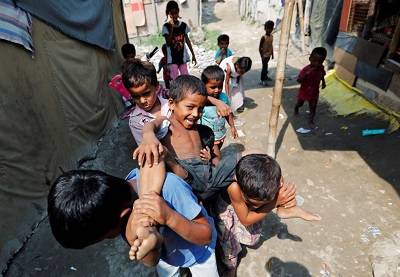 A police officer who visited the camp had asked Alam to fill a six-page "personal data" form. Alam refused.

He then walked around the camp looking for other men but didn't find many as the majority had gone to work.

The policeman left within 30 minutes but told Alam that he would be returning.

"He has been coming to the camp almost every day for a week and insists that we fill these forms," said Alam, a 27-year-old Rohingya refugee who has lived in India since 2012.

"We told him several times that we will not submit these forms or give any biometric data. The Indian government will send these forms to the Myanmar embassy and then we will be deported forcibly."

The Indian government has asked states to identify members of the Rohingya refugee community, record their biometric details and report them to the central administration.

"Advisories have been issued to states. They need to identify the Rohingyas, take their biometrics and send us a report. The [central government] will initiate action through diplomatic channels with Myanmar and get it resolved," India's Home Minister Rajnath Singh said recently.

In the current situation, it would be better to kill us all here rather than deport us, because we will be killed there anyway.

The deportation came hours after India's Supreme Court refused to intervene in a plea by defense lawyer Prashant Bhushan to allow them to remain in the country.

"Even the country of their origin has accepted them as its citizens," the court said, adding that it would not interfere with the government's decision.

The men were bussed to the border town of Moreh in Manipur state, where they were handed over to Myanmar border guards.

"This decision negates India's proud tradition of providing refuge to those fleeing serious human rights violations. It endangers the most persecuted population in the world and is bereft of any empathy."

Since then, tension and fear have gripped the refugee camp in Kalindi Kunj, where 50 Rohingya families have been living for several years.

They fear deportation to Myanmar, where they say the government would throw them in jail or concentration camps.

"All the seven men who have been deported to Myanmar were in an Indian jail since 2012. After deportation, they were not sent back to their homes but thrown into jail again," Alam told Al Jazeera.

"We fear same will be done with us as well."

An estimated 40,000 Rohingya, a mostly Muslim minority, live in India having fled persecution in Buddhist-majority Myanmar over the years.

The Indian government led by the Hindu nationalist Bharatiya Janata Party (BJP) has refused to grant the Rohingya refugee status.

A minister of Prime Minister's Narendra Modi's cabinet in August told the Indian parliament that the Rohingya were illegal immigrants.

"We know this, Rohingya are linked with wrong and illegal activities," said Kiren Rijiju, minister of state for home affairs.

The Rohingya men in the camp, who mostly earn a living as day-wage labourers and rickshaw drivers, reject the allegations.

"We give a list of people living in the camp to police along with documents every month," said Aman Jamal, 24.

"We work very hard to feed our families. We are not involved in any illegal activities. Not a single member from our community had been found involved in any wrongdoing."

Some sections of government and society in India consider Rohingya refugees a threat to national security.

In February 2017, at a Rohingya refugee camp in the Hindu-dominated Jammu region in Indian-administered Jammu and Kashmir, billboards were put up with messages such as "Wake up Jammu, Rohingyas and Bangladeshis quit Jammu".

Less than a month later, Jammu's Chamber of Commerce and Industries issued an ultimatum to the state government and threatened to "identify and kill" Rohingya if they were not deported soon.

Noor Qasim, 30, lives in the Kalindi Kunj refugee camp with his wife and two young daughters

"The Indian government should understand why are we here, in which situations we have come here," he told Al Jazeera.

Qasim, who works as a labourer at a cement warehouse for $95 a month, has been living in the camp since 2012. His mother, two brothers and two sisters are in Bangladesh.

"I've not seen my family since 2012. I want to go back home and live with my family again but we don't have any choice," Qasim said. "We left everything behind - our houses, businesses, fields, cattle and live like slaves here."

The persecuted minority have fled what several international leaders have termed a genocide in Myanmar, the Rohingya people's home country where they are not granted the simplest of rights - including citizenship.

Victims and rights groups have provided evidence of a campaign of ethnic cleansing. Myanmar security forces are accused of raping Rohingya women, tossing babies into fires, burning down entire villages and slaughtering thousands.

"India can deport us whenever it wants and we can't do anything because it is not our country," said Qasim. "But [Indian officials] should at least see the situation in Myanmar once. In the current situation, it would be better to kill us all here rather than deport us, because we will be killed there anyway."

Children from the Rohingya community play outside their shacks in a camp in New Delhi, India October 4, 2018 [Adnan Abidi/Reuters]