The Refugees to the Cave 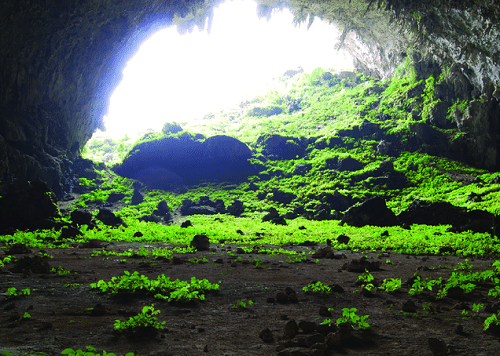 They were in a cave; just imagine its darkness, narrowness, and frightfulness; however, the cave was full of mercies, full of lights, and flows with blessings, while there are people who have been living in their dark caves of life, miserable livelihoods and temporary fortunes! The reason behind this is their lack of faith, being absorbed in their busy life, leaving the Sharee'ah (Islamic law) behind their back, keening on vanity life and cheap worldly things. They did not learn the lesson from the people who were ruined while they were competing with each other for such cheap worldly things.

They fled from the narrowness (darkness of disbelief) of that big world to the cave; consequently, Allah, the Exalted, bestowed His Mercy and Blessing upon them. Allah Says (what means): {…retreat to the cave. Your Lord will spread out for you of His mercy...} [Quran 18:16]

Just ponder about the Blessing and Generosity of Allah, and how He rewarded those youths, by replacing their extreme fear with peace and guidance.

They exhaustedly fled to the cave, which became (by the blessing of Allah) a relief of exhaustion, a relaxation from hardship, and a beautiful tranquility; so, their misery faded and their fear went away and was replaced with safety and prosperity. Allah Says (what means): {… and will prepare for you from your affair facility} [Quran 18:16]

The cave was a wonderful facility that surrounded them with blessing and goodness, took away their fear, gathered them after being lost, satisfied their hunger, and it was the best host for them.

They fled to the cave, while their faith was guiding them: trust in Allah was their support, and remembrance of Allah was always on their tongues; they were certain that Allah protects His slaves and lets His religion prevail.

They sought refuge in the cave with awareness and knowledge, courage and bravery; they did not fear circumstances nor the oppression of tyrants, and they admitted and spoke the truth fearlessly. Allah Says (what means): {when they stood up and said: "Our Lord is the Lord of the heavens and the earth} [Quran 18:14]

They stood by knowledge and mental challenge against those gods and those idols. How come a human mind that was illuminated by Allah follow an old unconvincing inheritance?

Allah Says (what means): {Why do they not bring for [worship of] them a clear authority? And who is more unjust than one who invents about Allah a lie?} [Quran 18:15]

Their situation of fleeing didn’t prevent them from pleading to Allah or crying for His Help. Allah Says (what means): {They said: "Our Lord! Bestow on us mercy from Yourself"} [Quran 18:10]; which means make us firm on the right path by your mercy that will keep us safe from evil, guide us to do acts of goodness, and keep us away from all kinds of trials and misery. Allah Says (what means): {… and prepare for us from our affair right guidance} [Quran 18:10]; which means facilitate for us all the means that will lead us to the right way and rectify our religious and worldly affairs. Thus, their religion was rectified by steadfastness and their worldly life by utmost relief and pleasant salvation.

So, Allah has honored them by increasing their faith, filling their hearts with guidance and mercy, and perfected their goodness and steadiness. They were not affected by any trial or feared any punishment. They feared no enemy or evil-doing of anyone. For faith, if enters the heart, it would be hard for the believer to deviate from it.

How can a person deviate or change when that person's heart is shrouded with faith, is full of light, through which that person enjoys a taste of the happiness that he/she never experienced, despite the pleasure, power, and wealth; Allah Says (what means): {…and We will surely give them their reward [in the Hereafter] according to the best of what they used to do} [Quran 16:97]

They tasted the good life by purifying their souls and mending their deeds, featured with sincerity and submission to Allah. Their souls were filled with love, getting closer to Allah and humbling themselves to Him. Therefore, when they woke up, they attributed the knowledge of the period that they had stayed in the cave to Allah. Allah Says (what means): {They said, "Your Lord is most knowing of how long you remained} [Quran 18:19]

They sent for the best food provided that it must be lawful, despite of being hungry and in need, despite fear and necessity. But the piety and the fear of Allah controlled their behavior and reminded them that Allah is watching them and that He encompasses everything in knowledge. Allah Says (what means): {… and let him look to which is the best of food and bring you provision from it.} [Quran 18:19]

This empty and abandoned cave was nothing but a new life for the young believers. Allah inspired them to go there and it was a resort for them from the plots of the oppressors, and it kept them away from harm. Allah Says (what means): {…retreat to the cave...} [Quran 18:16]; it was like a shelter for faith, crowned by the remembrance of Allah, goodness, and purity.

No more fear afterward, no worry from now on; you are the guests of Allah, The Exalted, The Most Generous, The Most Munificent. Therefore, eyes have been prevented from discovering them, doubts have been dissipated, and their enemies were expelled; all praise is due to Allah. The roots of falsehood were cut off and the truth is confirmed. All perfect praise be to Allah, The Lord of the Worlds.

Returning to the Truth Is a Virtue

The tremendous teachings of the Prophet, peace be upon him

The Refugees to the Cave

Writer: Dr. Hamza Ibn Faye’ Al-Fathi They were in a cave; just imagine its darkness, narrowness, and frightfulness; however, the cave was full of mercies, full of lights, and flows with blessings,...More