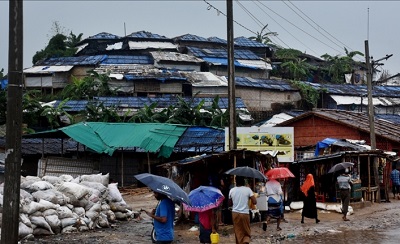 Amid stalled efforts to repatriate Rohingya refugees in Bangladesh to Myanmar, many people from the persecuted ethnic minority are seeking a way out and playing into the hands of human smugglers.

Hundreds of Rohingya refugees take perilous journeys on boats through the Bay of Bengal to reach Malaysia, Thailand and Indonesia. Many are detained by the border authorities; others perish at sea. Often at times, the refugees lose their entire life savings in making these journeys.

Bangladesh is providing shelter to 1.2 million Rohingya refugees on its southeast coast of Cox’s Bazar since a refugee influx in 2017 in the face of a Myanmar military crackdown.

On the 5th anniversary of the exodus on Aug. 25, there is growing frustration in the camps which house the world's most persecuted minority, as named by the UN.

According to a 2020 UN report, 2,413 Rohingya refugees took risky sea routes to reach a third country from Bangladesh's refugee camps. At least 218 died or went missing during the journey.

Ansar Ali, a refugee in Cox’s Bazar camp, told Anadolu Agency that one of his cousins was arrested by the Myanmar security forces and remained imprisoned for over a year.

“My cousin crossed the Bangladesh sea border from the refugee camp in Cox’s Bazar and landed in Myanmar to move to Malaysia to join our relatives. His relatives there in Malaysia gave him hopes of a better living. But all went in vain as soon as Myanmar border force detained him,” said Ali.

Rezaul Karim Chowdhury, head of Coastal Association for Social Transformation Trust (COAST), a non-profit organization that works for the Rohingya, a sense of hopelessness persists in the camps.

Relatives who have settled in Malaysia and Thailand, relatively wealth economies in the Southeast Asia, send money to the refugees, who pay smugglers for the risky journeys, said Chowdhury.

Activists say officials in Bangladesh and Myanmar work in cahoots with smugglers.

“Local people in host community, refugees and people and Myanmar authorities are engaging in the process of trafficking, which results in mass arrests, rape and killing," said Nay San Lwin, co-founder of the Free Rohingya Coalition, a global network of activists working to raise awareness about the ongoing Rohingya persecution.

Since the military seized power in Myanmar, thousands of Rohingya fleeing by boats and road were arrested and sentenced to two years in prison with hard labor, the activist said.

As most people have failed to escape from the country and are arrested, the smugglers are making a significant profit, he added.

“Some of the refugees who joined such a sea journey through Bay of Bengal have relatives or friends in those countries and they want to meet them there. Their number is insignificant and such an event (refugee’s sea voyage) doesn’t happen often,” he told Anadolu Agency.