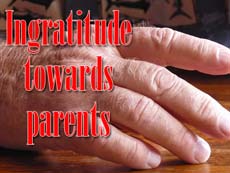 {Say not to them a word of contempt, nor repel them, but address them in terms of honour.} [Quran 17:23]

In Islam, it is obligatory for us to show kindness, respect, and obedience to our parents. The position of parents, and the mutual obligations and responsibilities, have been addressed in Islam in great detail. In fact, kindness and obedience is so strongly emphasized that Allah has linked showing gratitude to one's parents with showing gratitude to Allah. In the Noble Quran, Almighty Allah Says (which means):

{And We have enjoined on man (to be good) to his parents: in travail upon travail did his mother bear him, and in years twain was his weaning: (hear the command), "Show gratitude to Me and to your parents: to Me is (your final) return.} [Quran 31:14]

Sadly, we are living in a time where children speaking disrespectfully to their parents and about their parents, is the norm rather than the exception. However, Islam places great emphasis on respectful and considerate behaviour to even our enemies, so to not uphold the obligations laid down by Allah to our parents is actually one of the major sins.

Let's see what the Quran says about parents. {This is the Book; in it is guidance sure, without doubt, to those who fear Allah.} [Quran 2:02]

{Your Lord hath decreed that you worship none but Him, and that you be kind to parents. Whether one or both of them attain old age in your life, say not to them a word of contempt, nor repel them, but address them in terms of honour. And, out of kindness, lower to them the wing of humility, and say: My Lord! Bestow on them Your Mercy even as they cherished me in childhood.} [Quran 17:23]

{...Be grateful to Me and to both your parents; to Me is the eventual coming. But if they strive to make thee join in worship with Me things of which you have no knowledge, obey them not; yet bear them company in this life with justice (and consideration), and follow the way of those who turn to Me (in love): in the end the return of you all is to Me, then will I inform you of what you did.} [Quran 31:15]

These verses make it clear that we must honour our parents, appreciate their sacrifices and efforts for us, and do our best for them. This is required regardless of whether they are Muslims or not.

Be good to parents and everyone whom you meet

The Quran states (which means):

{Worship Allah, and join not any partners with Him; and do good- to parents, kinsfolk, orphans, those in need, neighbours who are near, neighbours who are strangers, the companion by your side, the wayfarer (ye meet), and what your right hands possess: For Allah loves not the arrogant, the vainglorious.} [Quran 4:36]

If the Quran tells us to be good to a stranger, then how can we even think of disrespecting our parents?

said about parents in the authentic Hadeeth (narrations). Almighty Allah Says (which means): {Whatsoever the Prophet gives you, take it and whatsoever he forbids you, refrain from it.} [Quran 59:7]

Undutifulness to parents is a major sin

about the major sins. He (the Prophet) observed: “Associating anyone (or anything) with Allah, undutifulness to parents, killing a person and false utterance.” [Muslim]

narrated: I asked the Prophet

“Which deed is the dearest to Allah?” He replied, “To offer the prayers at their early stated fixed times.” I asked, “What is the next (in goodness)?” He replied, “To be good and dutiful to your parents” [Al-Bukhari]

A man of the tribe of Salamah came to Prophet Muhammad

and said: 'O Apostle of Allah! Is there any kindness left that I can do to my parents after their death?' He replied: 'Yes, you can invoke blessings on them, forgiveness for them, fulfill their promises and pledges (to do righteous deeds), maintain ties with kinfolk for the mere reason of being dutiful to them (i.e. parents), and honour their friends.' [Abu Daawood]

The High Status given to Mothers

A man came to the Prophet

and asked him for permission to fight Jihaad. The Prophet

asked him if he had a mother, and when he replied affirmatively, he

Sometimes we may take our parents for granted and overlook their importance. As Muslims, we should constantly be alert to guard ourselves from sins; however, are we guarding ourselves from one of the biggest major sins? Are we honouring and respecting our parents as per their right? Or are we neglecting one of the dearest deeds to Allah?

Right now the choice is ours!