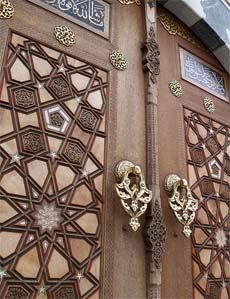 ‘Aaishah Abid Choudry - her given name is Harumi - adopted her Muslim name and faith four years ago, at the age of 26, to marry a Pakistani. Two years later, like many Japanese women married to Muslim men in Japan, she remained reluctant to abide by Islamic laws. Then one day about two years ago, she decided to act on her own intuition that Islam meant having a personal relationship with Allah [Arabic for God]. She got on her knees to pray for the first time. Her husband, a devout Muslim who had never asked her to adopt Islam but had prayed silently on her behalf for years, cried openly at the sight.

Once distant and unknown in Japan, Islam has found reverts among young Japanese women. Many are married to men who come to Japan to find work from countries with Islamic traditions such as Iran, Bangladesh, Pakistan and Malaysia.
A hub of Islamic activity in Tokyo, the Islamic Center in Setagay-ku registered over 80 new members this year, the majority were Japanese women.
Although some women reverted with no thought of marriage, many more reverted to Islam to marry Muslims; the center reports a record number of 40 marriages between foreign Muslims and Japanese women reverts this year.
Women are attracted to Islam because they want freedom. Islam gives them independence because they do not have to be a slave of any man. Islam is against moral aggression against women. The chastity and honor of women are protected. No illicit relations are allowed. All these things attract women," said Siddiqi.
Islamic law also provides that men may have more than one wife. "This cannot seem to leave Japanese heads," said Siddiqi. "We explain one thousand times that marrying four times is permissible only in certain unavoidable circumstances such as impotency, infertility and so forth. As a result there is no prostitution in Islam. If you need another women, then marry her, take care of her children."
Asked why a woman can't have more than one husband, Siddiqi explained, "Because she can't decide on whose child it is. It is confusing for her." (Japanese law uses the same logic, forbidding women to remarry within six months of divorce.) [In Islam the waiting period, ‘idda’ is shorter].
Japanese women who marry men from Islamic countries often face ostracism from their families and alienation from friends; living by Islamic laws requires major changes in nearly every aspect of their lives.
The Muslim's daily ritual of prayer (salat) facing Makkah, before sunrise, at noon, mid-afternoon, after sunset, and before sleep, for example, is a major hurdle for anyone who wants to hold onto a steady job. One resourceful young woman who works for a major electronics company in Tokyo manages to pray in the company changing room. [An MIT-Japan Program Intern at another major electronics company, Sharp, finds that prayer is no hurdle to holding onto a steady job.]
The new Muslim must also make major changes in her diet. Muslims who strictly follow the Qur’an may not consume pork and alcoholic beverages. Nor eat animal products that have not been blessed.
Juices and ‘Tsukamoto’ may contain preservatives with low levels of alcohol; chocolate, ice cream, cakes and other processed desserts may contain animal fats, and gelatins may be made from animal bones.
Although lawful and blessed (halaal) products have become increasingly available from shops that specialize in halaal or imported products, many basic products sold in supermarkets are off limits to the Muslim.
The most obvious obligatory symbol of the Muslim woman is the veil (‘Hijab’) that covers her head, and the long sleeves, and pants that cover her limbs. Countries have variations on this; Saudi women cover the nose and mouth as well, while Malaysian Muslims [women] wear short scarves over their heads.
An energetic face framed within her black Hijab, Aysha says, "I wasn't born a Muslim, so I'm strict (about Islam). Before I became a Muslim, I was the secretary to a company president so I drank alcohol, played, wore miniskirts, everything. After I became a Muslim, everything changed. I threw away or gave away five bags of clothing. To become a good Muslim takes time, though."
Although strict Islamic life may not be incongruous with lifestyles in Saudi Arabi, in Japan, Islam means accepting a life radically different from the ordinary Japanese. Perhaps, for some, herein lies the appeal.
Before I became a Muslim I didn't know what I was put here on earth for. I thought that the purpose of working was to make other people think highly of me. I believed that a person's worth was based on what university he went to and how much money he made. Now I know that work is to nourish my body and I am here to live each day to praise Allah," said a woman in her 20's married to a Pakistani truck driver.
Others, like Noureen, a 30-year-old teacher of nursing at a women's university in Saitama, had tried other religions, including Christianity, which she found unsatisfying before finding Islam. She met her husband, a 29-year-old Pakistani factory worker, while attending study sessions at the Islamic Center (their trip home took them in the same direction) and officially became a Muslim before their marriage four years ago.
Also, for many Muslims in Japan who open Indian restaurants, serving alcohol is a painful dilemma. Although prohibited by the Quran it is all but impossible to run a restaurant in Japan without it.
While adult Muslims may somehow overcome the difficulties of living under Islamic law in Japan, for children it is virtually impossible. Noureen hasn't seen their 2-year-old son for six months since they sent him to Pakistan to live with his grandparents to receive a true Islamic upbringing.
She tried sending him to a nursery for a year in Japan and asked the staff not to feed him. Still she worried that he might be taking food from other children. "When he gets older, we would have to worry about him attending birthday and Christmas parties and it would be sad and hard for him to make friends.
At present there are no Islamic schools in Japan. Noureen says, "the problem is not just food, it's the concept: In Japan people think their body is their own, and that a child should stay up all night studying and only think about exams. “But we believe that one's body belongs to God and should be treated with respect.”