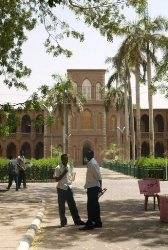 In a small roadside market in Khartoum, Ali is leaning across the piles of neatly folded trousers he is selling, trying to keep the attention of his one potential customer. It is a difficult job, especially once he tells the man the price. The cost of the trousers he is selling has nearly doubled in recent weeks from 20 Sudanese pounds (SDG), or about $4, to 35 SDG, around $7 - and sales have plummeted. "People keep asking for discounts but I am barely making a profit as it is. Things are really bad."

Ali's frustrations are shared by many in the Sudanese capital, which in recent days has witnessed daily protests against a raft of government austerity measures that have made life more difficult. As a matter of fact, the situation in Sudan has become progressively worse since South Sudan split last year, taking 75 per cent of the oil reserves with it.

The consequences of a sharp drop in oil income are being borne by the likes of Ali. Before the current economic downturn, he would sell around 100 pairs of trousers a day. But now with the cost of his Chinese-made trousers soaring, he is selling 15 at best every day.

Ali came to Khartoum from the town of Damazin, 460km southeast of Khartoum. He is among the many Sudanese who over the last decade have crossed the desert of this vast country to benefit from the jobs created by Khartoum's once-booming economy. Fed by billions of oil dollars, its roads have been tarmacked and shiny new office towers have shot up while its growth has created millions of consumers dependent on imported cars, glitzy household goods and foreign trousers.

But that heyday ended suddenly, following the secession of South Sudan last July and Sudan's subsequent loss of oil income.

The last year has seen spiraling inflation which now runs at 30 per cent, making the cost of an import-dependent urban life soar.

This week, in an attempt to address the economic meltdown, the Sudanese government announced dramatic austerity measures. Taxes are going up, government jobs are being cut, and the Sudanese pound is officially being devalued - as economists had long warned would have to happen. And fuel subsidies will gradually be ended.

This last measure has proved the most unpopular because it will affect the price of nearly everything in the economy, from transport to domestically produced food and other goods.

But some in the business community welcome them. "It is a relief, actually," admitted one businessman. "Yes, they will hurt, but now they've taken these difficult decisions, things hopefully might stabilize a bit and we can start planning how we will survive this difficult period."

The government has acknowledged that it is the poor of Sudan who will suffer most from these measures, but has said it had no choice: the state is bankrupt, it says, and faces a deficit of more than $2bn. It is hoping these measures will save $1.5bn.

Abdu is a 24-year-old from Darfur who is working as a night guard. Seven years ago, he left his family in a camp for internal refugees, where they still live. Abdu moved to Khartoum to find work to help support his family and to study. "But things are very difficult these days - food is so expensive," he says, adding that he has to earn 34 SDG (about $7) a day just to cover the cost of food and transport. He earns less than half that.

Even some traditional foods like ful - a bean dish - are partly imported from Egypt, and Abdu is complaining about its rising price. "A portion of ful has gone up from 1.5 SDG (about $0.30) not so long ago to 5 SDG (approximately $1) now," Abdu explains. He says he is eating only simple food these days.

Kocho, who is now retired, supplements his family's income by working gardening jobs. His wife still has a regular salary, but as a state schoolteacher it only amounts to around 400 SDG a month (about $80). Originally from the Nuba Mountains, Kocho has lived in Khartoum for many years, and has four children, all of whom are in school. Their family's diet has adapted to meet the rising food prices. "We used to have three meals a day; now we are doing well if we have two. We are eating less meat and vegetables because they are so expensive now."

The government has committed to keeping subsidies on wheat, the vast majority of which is imported. Wheat is the staple of the Khartoum diet. But in South Kordofan where Kocho's relatives live, fighting has prevented people from planting crops this season. So basic food is in scarce supply. The price of a small bag of sorghum, the staple of the region, has risen from 1 SDG ($0.20) to 10 SDG ($2), Kocho says.

"I am not hopeful things will change anytime soon. My kids are facing a bleak future," says Kocho. Asked how people will survive these troubles, he says: "People are patient, just patient." Then he bows his head and looks down at his hands as he adds: "But inside they are burning. They are not happy at all."

Khartoum University. Khartoum has seen an outburst of social unrest in the past week, driven by rampant inflation and simmering discontent.