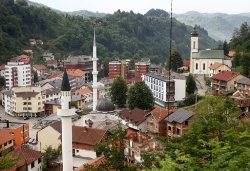 Mina Subasic slowly walks with a cane into the missing persons' identification center in Tuzla, northern Bosnia and Herzegovina. On the table in front of her is a handful of bones. Her face frozen with pain, Subasic listens to a forensic expert who explains why it would be good if the remains of her 20-year-old son, Mesud, were buried on July 11, along with those of 519 other victims of the 1995 Srebrenica genocide - a massacre described by UN Secretary-General Kofi Annan as the worst atrocity in Europe since World War II.

"I came once more to see him, so I, too, can cross over to the other side. If I could, I would lie down next to these bones right now and never wake up," Subasic says. Mesud's remains were located in two mass graves in the Srebrenica area. The remains of his 18-year-old brother Nermin were buried two years ago.

Wednesday marks the 17th anniversary of the Srebrenica genocide in which Serb forces reportedly under the command of General Ratko Mladic killed more than 8,000 people, mainly Bosniak Muslim men and boys. While the figure on the headstone at the Srebrenica-Potocari Memorial Centre is 8,372, the number of missing persons, experts say, may never be discovered. At midday, an estimated 30,000 people will gather at the center for the burial of the remains of 520 victims.

Among them will be those of six 15-year-old boys, and the oldest genocide victim, a 94-year-old woman. Two Srebrenica families will pay their final respects to three brothers each lost from their homes.

In Apil 1993, the United Nations declared the besieged enclave of Srebrenica, in north-eastern Bosnia, populated by 36,000 people (27,000 Bosniaks and 8,000 Serbs) a UN "safe area". In July 1995, a 400-member contingent of Dutch peacekeepers from the UN Protection Force (UNPROFOR) failed to prevent the capture of Srebrenica by Bosnian Serb forces, assisted by irregular fighter units from Serbia, nor the subsequent mass atrocity.

In a unanimous ruling in 2004, the Appeals Chamber of the International Criminal Tribunal for the Former Yugoslavia (ICTY) in The Hague, ruled that the Srebrenica massacre constituted genocide. Three years later, the International Court of Justice (ICJ) concurred with this judgment.

The then-Federal Republic of Yugoslavia was cleared of direct responsibility for, or complicity in, the massacre, but was found responsible for not doing enough to prevent it and not prosecuting those responsible.

The entire government of the Netherlands resigned in 2002, upon publication of an international report on Srebrenica, which blamed Dutch officials and Dutch soldiers for not preventing the mass killings. In 2005, Kofi Annan, the then-UN Secretary-General, noted that, while the blame lay first and foremost with the perpetrators, the tragedy of Srebrenica would haunt the UN. It has been documented that more than 25,000 people participated in the atrocities in Srebrenica in July 1995. So far, more than 30 people accused of war crimes have been sentenced at the ICTY and at Bosnian war crimes courts. General Mladic and Bosnian Serb wartime political leader Radovan Karadzic are currently on trial in The Hague, accused of genocide and war crimes.

When the 520 coffins are laid to rest this afternoon, about 7,000 participants of the annual March of Peace will be present to lend a hand. The 120 kilometer (74 mile) walk marks, in reverse, the path which 10,000 citizens of Srebrenica passed in 1995 on their way to free territory. There are no definite figures on the number of those ambushed and killed by Serb forces during what was then known as the March of Death, but it is estimated that more than two thirds were slaughtered.

Al Jazeera reporter Almir Seckanovic, who has been live blogging from the three-day march, which ended Tuesday night, said only a few women survived the trek in 1995, through inhospitable mountainous terrain in the searing July heat.

"Among them was Fatima Dautbasic-Klempic, a Srebrenica doctor, who was 30 at the time," reported Seckanovic. "During this year's march, at Mt Udrc, she remembered constant grenade attacks, spies who tried to lead the marchers to ambushes, the crashing of booby-trapped trees.

"Today, she is married to Smajo Klempic, a fellow marcher whom she didn't know 17 years ago. He separated from the line at Kamenica Hills and roamed through the forest for 20 days before making it to safety."

After the war, 15 secondary mass grave sites were found in the village of Kamenica - containing the remains of bodies previously buried elsewhere, exhumed, then broken up and reburied. The site is now known as the Valley of Mass Graves.

"Marchers this week found several human bones in the valley and they have been handed over to authorities for identification," said Seckanovic. At Mt Udrc, which overlooks the valley, 65-year-old Muharem remembered how he made it to freedom in 1995 after a 10-day trek. "Here, at this turf, I found two potatoes. I had separated from the line and accidentally walked towards these meadows," said Muharem. "Do you know what those potatoes meant to me? Life. For days, I had been eating just fruits and leaves."

Many of the genocide survivors gathered at the memorial have participated in the Cinema for Peace (CFP) foundation's project in Bosnia and Herzegovina, entitled Genocide Film Library. Inspired by Steven Spielberg's Shoah Foundation, CFP aims to record 10,000 video testimonies of Srebrenica genocide survivors over five years. The online archive will be made available to relevant museums and universities worldwide.

"About 95 per cent of those we have contacted have wanted to tell their story," says project director Selma Hadzic. "Some people have found it too traumatic to participate and we fully understand and respect that. We always underscore that this is a volunteer project which exists in memory of those whose voices will never again be heard."

In Srebrenica, survivors' families have slammed plans for a concert which is to be held at the town's central Serb Orthodox church during the "Days of St Peter" festival, on the same day as the mass burial.

Hatidza Mehmedovic, president of the Mothers of Srebrenica group, who lost her husband and two sons, said that such provocation on July 11 were common in a town that remains deeply divided along ethnic lines.

"In previous years, there were songs celebrating Mladic and Karadzic," she said. "We don't expect anything good this year. After all that happened, letting such songs to be sung from year to year... the international community is to blame."

As Srebrenica is part of the RS, whose government does not recognize the genocide, July 11 is not considered a day of mourning as it is in the FBiH.

Srebrenica's primary and secondary schools follow the RS curriculum, which means Serb and Bosniak children, who make up roughly half each of the school's population, are taught that Srebrenica was "freed" in 1995. In a petition currently before the RS Education Department, Bosniak parents are requesting that a joint, more acceptable curriculum is developed for subjects such as language and history.

The ethnic divide is most pertinently felt in activities surrounding the local elections, to be held on October 7. The central fight in these elections is not over which candidate would bring economic prosperity to a war-ravaged town without a bakery, health center other basic services - but whether they will be Bosniak or Serb.

During the 2008 local elections, a legal exception was made for thousands of displaced Srebrenica citizens to vote in Srebrenica, despite their address at the time of the elections.

Srebrenica's Bosniaks view the removal of this exception as the continuation of ethnic cleansing, says Bosniak candidate for mayor, Camil Durakovic, the current acting mayor and a survivor of the March of Death.

A citizens' group "I'll Vote for Srebrenica" was formed, aimed at lobbying as many displaced Srebrenica citizens as possible to register their residency in the town and vote there. Bosniaks claim they are allowed to work in only one of a handful of local factories, while Serbs say they would be threatened if a Bosniak were mayor.

Durakovic, an independent Bosniak candidate, is backed by 13 citizens groups and the four most influential political parties in the FBiH. His opponent, council head of commerce Vesna Kocevic, a Serb, has the backing of nine RS-based parties.

Durakovic says that he wants to make Srebrenica a multi-ethnic town with a more prosperous future, but one which must not forget genocide. He says Srebrenica's economic potential - its mines and wood industry - were first ravaged through a corrupt post-war privatization process, while he says the RS government is now blocking council efforts to retain control of the area's vast natural resources. Durakovic estimates that, with better management, Srebrenica could join the ranks of the most developed local councils in Bosnia and Herzegovina within three years.