On the receiving end of Israeli 'impunity' 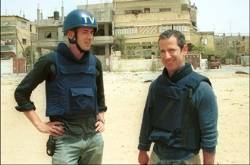 Looking back at other victims who, like Rachel Corrie, came under Israeli attack and then were deprived of justice.

The death of 23-year-old American peace activist Rachel Corrie was a "regrettable accident", an Israeli court has ruled, in a verdict that was neither surprising nor unfamiliar.

Corrie was crushed by an Israeli Defense Force (IDF) bulldozer razing Palestinian homes on March 16, 2003. She was among a group of international peace activists volunteering in the Gaza Strip to protect Palestinian houses from demolition.

The student from Washington State was standing in front of a home in the Rafah refugee camp when the armored bulldozer ploughed through it.

Wearing a bright orange jacket with reflective stripes, eyewitnesses said Corrie was completely visible to the driver, who failed to stop and ran over her twice. The Israeli army said the driver's vision was restricted.

The Haifa District Court on Tuesday rejected a civil lawsuit filed by her family against the Israeli army in 2005, which accused the IDF of intentionally killing Corrie.

Judge Oded Gershon said Corrie chose to put herself in danger. "She could have easily distanced herself from the danger like any reasonable person would," he said.

Hussein Abu Hussein, the lawyer for the Corrie family, said they might appeal the verdict with the Israeli Supreme Court. "We are now studying our options," said Hussein.

The ruling did not come as a shock. Similar lawsuits in the past against the army were also rejected by Israeli courts. A pattern also emerges of internal army investigations clearing soldiers involved, and pay-offs to victims' families to make the case go away.

Here is a list of Western civilians killed or wounded by the Israeli military:

In May 2003, 34-year-old James Miller, a Welsh filmmaker and cameraman, was shot dead by the Israeli army in Rafah. Miller was working on a documentary called "Death in Gaza", which was released after his death in 2004.

An army spokesperson said Miller was caught in a cross-fire, and accused him of endangering his own life by "knowingly entering a combat zone". An investigation was opened by the Israeli army, but closed in September 2005. Miller's sister insisted her brother was deliberately killed.

Prosecutor Avichai Mandelblith admitted the army unit's commanding officer at the scene fired his weapon in breach of the IDF's rules of engagement. Nonetheless, no soldiers involved in the incident were put on trial.

Miller's family requested the prosecution of the Israeli soldiers in the United Kingdom under the Geneva Conventions Act. The Israeli government paid the family 1.75m pounds ($2.7m) in exchange for halting legal proceedings.

Twenty-one-year-old Tom Hurndall, a British photography student and peace activist, was shot in the head in the Gaza Strip on April 11, 2003. Hurndall remained in a coma before dying in January 2004 at a UK hospital.

Hurndall was in Rafah with a group of activists when the Israeli Defense Force suddenly opened fire. Recognizing rounds were hitting the ground near a group of children, Hurndall attempted to move them to a safer location. A sniper's bullet struck his skull as he knelt down to carry a child away.

The Israeli army also claimed he was caught in a cross-fire, and blamed him for his own death by saying Hurndall was "functioning as human shield".

In October 2003, the British government pressured the IDF to open an investigation. The soldier who killed Hurndall – an award-winning marksman – said he aimed away from the activist and fired as a deterrent, but unintentionally hit him.

The soldier was sentenced by a military court to eleven-and-a-half years' imprisonment for manslaughter in August 2005.

His sentence was, however, shortened to six-and-a-half years for "good behavior". The International Solidarity Movement said "an injustice was committed by his early release from prison in September 2010".

Iain Hook, a 54-year-old British United Nations Relief and Works Agency employee, was shot dead by an Israeli sniper in Jenin on November 22, 2002. Hook was in a UN compound at the Jenin refugee camp when he was shot in the back from a distance of 20 meters. The Israeli army said the soldier mistook the mobile phone Hook was carrying for a grenade.

The British government pressured the Israeli government to launch an inquiry, and shortly after an Israeli general delivered a verbal report that didn't admit any wrongdoing to the British ambassador in Tel Aviv. The ambassador rejected the account, and insisted on a detailed written report.

In 2005, a British inquest was opened and jurors unanimously agreed Hook was deliberately killed. The British government in 2007 revealed the Israeli government had reached a secret settlement with Hook's family. No legal proceedings ever followed.

American peace activist Brian Avery suffered permanent disfigurement after being shot in the face by an Israeli soldier in Jenin on April 5, 2003.

Avery was walking two blocks from his apartment with a group of international activists when two Israeli military vehicles approached. Avery was wearing a fluorescent vest with "Doctor" written on it. Soldiers "opened fire with their machine guns and continued shooting for a very long time", Avery said. A round from a heavy weapon tore through his face.

The Israeli army refused to open an inquiry into the incident, claiming no soldiers on patrol were in the area that night.

In 2005, Avery requested a criminal investigation into the shooting. He accepted a settlement of $150,000 from the Israeli government in exchange for dropping the lawsuit in November 2008.

Tristan Anderson, a 37-year-old American peace activist, was hit by a high-velocity tear gas canister during a demonstration in Nilin in 2009.

Fired by an Israeli soldier, the canister slammed into his head, fracturing his skull.

Anderson underwent extensive surgeries during a 15-month stay in an Israeli hospital.

In February 2010, the Israeli Ministry of Justice announced it would not file any cases in court.

Anderson and his family have filed a lawsuit against the Israeli army, but the case has yet to go to court.

On November 15, 2000, 68-year-old German doctor Harald Fischer was killed by a missile fired from an Israeli helicopter gunship in Beit Jala.

Fischer was married to a Palestinian and worked as a volunteer doctor, living in Beit Jala since 1981.
He headed outside to help his wounded neighbor, whose house was hit in the same Israeli assault minutes earlier. ''He didn't come back,'' his wife said.

German Foreign Minister Joschka Fischer said he was "shocked and horrified" by the attack.

The Israeli government promised an investigation. No results have ever been announced.

The 42-year-old Italian photographer was struck by a burst of machine gun fire from an Israeli tank. Raffaele Ciriello was shot dead on March 13, 2002 in Ramallah.

The Italian government demanded an investigation into the incident.

In August 2002, the Israeli army claimed there was "no evidence and no knowledge of a force that fired in the direction of the photographer". Case closed.