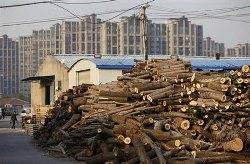 China's skyrocketing demand for timber to fuel its economic boom is driving illegal logging and contributing to the destruction of forests in Asia and Africa, needed now more than ever to halt climate change, a new environmental report says.

China is now the biggest international consumer of illegal timber, according to the report from the Environmental Investigation Agency (EIA), which adds that the trade is causing the destruction of vast tracts of forest in developing countries.

Globally, the trade in illegal timber is worth between $30 billion and $100 billion a year, according to an Interpol and United Nations Environment Program report.

Deforestation is a major contributor to climate change, as the trees that soak up carbon dioxide disappear.

"Illegal logging now accounts for between 15 and 30 per cent of the global legal trade and significantly hampers the Reducing Emissions from Deforestation and forest Degradation (REDD) initiative," the Interpol-UNEP report said.

The EIA report - titled "Appetite for Destruction" - highlights what it says is China's lack of action to prevent imports of illegal timber.

"A major barrier to the effectiveness of China's anti-illegal logging response is the country's stated unwillingness to explicitly prohibit illegal timber trade," it said.

China imported about 180 million cubic meters of wood products worth $9.3 billion in 2011, becoming the largest importer and exporter of timber products.

Saving its own forests

In contrast with its growing import of timber, China has taken action to protect its own forests and imposed strict logging controls. Because of these actions, the country's forests are unable to meet the demands of the wood-processing sector.

"China launched its national natural forest protection program and that had a lot of impact in protecting natural forest in China. It means that the Chinese industry can't get timber from domestic forests so has to increase its imports," said Liu Bing, the head of Greenpeace East Asia's forest campaign.

Successful reforestation efforts have been carried out, and according to the state news agency Xinhua, the Chinese government has committed to increase forest coverage by 40 million hectares and forest stock volume by 1.3 billion cubic meters by 2020 from 2005 levels.

While China has taken successful steps to protect its own forests, it is at the same time relying on the destruction of others for raw materials. "China is now effectively exporting deforestation around the world," Faith Doherty, head of the EIA forests campaign, told Al Jazeera.

Much of the timber comes from countries with forest governance deemed less than stringent, such as Papua New Guinea and Mozambique, and countries where such exports are banned, including Indonesia. Most rosewood logs imported into China in 2011 reportedly came from Southeast Asia's Mekong region, despite a series of logging and trade bans on endangered tree species.

According to Forest Trends, a Washington-based NGO that promotes sustainable forest management and conservation, China's consumption of wood products was 371 million cubic meters a year in 2007. At current growth rates, it will rise to 477 million cubic meters by 2020.

While much of the timber is used for the booming construction sector, there is also rising demand for furniture made from exotic and rare woods among affluent Chinese. Replicating ornate designs from the Qing and Ming dynasties, some of these pieces are sold for as much as $1 million each.

One of the countries most affected by the illegal timber trade into China is neighboring Myanmar.

According to the EIA report, Myanmar has one of the worst rates of deforestation in the world and, since the late 1990s. China has imported large volumes of its timber, most of which was reportedly logged and traded illegally.

Despite an agreement in 2006 between the Chinese and Myanmar governments to stop the illegal timber trade, it appears to have continued.

"Chinese traders confirmed that as long as taxes are paid at the point of import, logs are allowed in despite a commitment from the Yunnan provincial government to allow in only timber accompanied by documents from the Myanmar authorities attesting to its legal origin," an EIA investigation found last year.

Doherty said the Chinese government must follow actions taken by the European Union, the United States and Australia to crack down on the trade.

Doherty highlighted the EU Timber Regulation legislation set to come into force in March 2013. "It will be a criminal offence to illegally source wood products and timber, that includes products from China," she said.

Responding to questions about the EIA report, the Chinese government said it would toughen up enforcement.

"We resolutely oppose and crack down on illegal logging and related trade and stick to the mutually beneficial and sustainable strategy of forestry management and cooperation," said Chinese Foreign Ministry spokesman Hong Lei.

"I think they are really serious because they are under pressure from the international community," Lui told Al Jazeera. "It is the only way … to make the reputation of the [timber] industry and of China better."

A man walks near a timber storage area in Shanghai December 12, 2011.