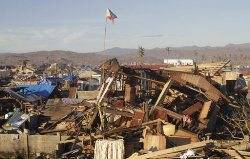 Weeks after Typhoon Bopha tore through the southern Philippines leaving more than 1,000 dead and hundreds missing, residents of this town are still adrift on a sea of hopelessness.

Anna Jane Saigod, 16, is not sure about how to fend for herself and two other siblings who survived the storm. Twelve members of her family - parents, a younger sister and nine relatives - are missing and Saigod says she is lost in the typhoon's aftermath.

"We are left alone, and now we don't know what to do and what will happen to us in the coming days," she said, clutching her three-year-old brother, Tito.

More than 300,000 people are now homeless, according to the International Federation of the Red Cross.

Currently, the three have found shelter in a school-turned-evacuation center. Food is scarce and they eat only what aid agencies provide them.

But more scarce is hope of reuniting with their missing relatives. An estimated 800 people remain missing, and the chances of their return grow slimmer each day.

Saigod has scoured every possible place and even followed the stench of bodies buried under logs and mud, but with no luck in finding her parents.

"Weeks have passed but we lost touch of them. My younger brother was asking where mother is, and I simply say she’s just out to the market for food."

Since floodwaters receded, New Bataan has become high on despair and low on hope. The only things rising amid the devastation are stinking rubbish and the foul smell of rotting corpses.

"The situation is totally unacceptable," said Marivic Helandes, 32, a mother of two children.

About 200 unidentified bodies were buried in a mass grave Saturday with the threat of disease becoming increasingly more dangerous.

An estimated 150,000 children under the age of five and 35,000 pregnant and lactating women are at risk of nutrition deficiencies because of increasing diarrhea outbreaks and respiratory infections, officials say. In Davao Oriental, two people have died and another 300 have been sickened by diarrhea.

"The health condition of my kids is at risk. We need a good place to stay. Every morning it’s cold here since we are in open space. Sometimes, if the wind goes to our direction, we can smell the dead bodies coming from the cemetery," Helandes said.

The elderly among the survivors recall a similar storm some 60 years ago, but the scale of this devastation is infinitely more severe. "If you don’t have sickness and you are staying here, surely you will get sick," she added, pointing out the debris everywhere.

Saigod and Helandes are just two among the 6.2 million people in the southern Philippines affected by the typhoon.

Officials are warning that rehabilitation and reconstruction following the country's worst natural calamity could take years.

Dr. Martin Parreno, nutrition coordinator for ACF International- Philippine Mission, told Al Jazeera rehabilitation efforts would depend on "how soon can we respond" and "availability of funding support".

"Right now, the immediate needs are shelter, debris-clearing, water and sanitation, nutrition, protection and health - particularly in the Davao Oriental province where the super Typhoon Bopha destroyed nearly all structures," he said.

"It will even take a year or more."

The challenges left in the typhoon's trail are daunting, and that includes raising the necessary funds to combat the crisis.

The United Nations has asked for $65m, but pledges and actual contributions to date have totaled only $12.1m.

The UN Office for the Coordination of Humanitarian Affairs says between 800,000 and 1.1m people in the most affected areas of Mindanao island may be in need of food assistance.

Then there is the task of rebuilding peoples' livelihoods lost in the storm. Rebuilding broken and damaged infrastructure will also prove to be a massive challenge, said Dinky Soliman, secretary for Department of Social Welfare and Development.

The damage to agricultural products has been $530m alone, official estimates say.
Speaking to Al Jazeera, Antonio Cloma Jr., a local disaster official, said the state will give priority to restoring livelihoods.

"There are resources coming in not only from us but with other countries as well. The United Nations and other international relief organizations are helping us. The government will assist typhoon victims until they can recover," he said.

"In the first three months, the government and other countries will support them in terms of relief requirements. After that, we will start the rehabilitation of schools, bridges and houses," he added.
But his optimism is not shared by many in the battered region. Besides shelter and supplies, hope too is in short supply in regions such as New Bataan.

A Philippine flag flutters amidst houses destroyed in the coastal town of Cateel that was devastated during last Tuesday's Typhoon Bopha in Davao Oriental, southern Philippines, December 11, 2012.