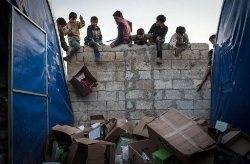 UN agencies have warned of a growing humanitarian crisis in Syria, as an estimated four million people there are in need of assistance.

UN humanitarian chief Valerie Amos said the opposition-held north of Syria remained largely out of reach of aid operations, even though they had been stepped up elsewhere in the country torn by war.

"We are watching a humanitarian tragedy unfold before our eyes," Amos told a news briefing on Tuesday. "We must do all we can to reassure the people that we care and that we will not let them down."

The Syrian government still refuses UN convoys entry from Turkey into northern Syria, as most border crossings are controlled by the opposition Free Syrian Army, she said.

Four million Syrians were deemed in need of aid late last year, but the situation has deteriorated since due to shelling, inflation, and shortages of food and medicine, Amos said.

Meanwhile, the World Health Organization (WHO) said typhoid had broken out in an opposition-held region due to people drinking contaminated water from the Euphrates River.

An estimated 2,500 people in northeastern Deir az-Zor province have been infected with the contagious disease, which causes diarrhea and can be fatal, the UN agency said on Tuesday.

"There is not enough fuel or electricity to run the pumps so people drink water from the Euphrates which is contaminated, probably with sewage," the WHO representative in Syria, Elisabeth Hoff, told Reuters news agency.

The WHO has no confirmed reports of deaths so far from typhoid.

Typhoid fever is an infection of the intestinal tract and bloodstream caused by salmonella bacteria. People become infected after consuming food or beverages handled by an infected person or by drinking contaminated water.

Symptoms can be treated with antibiotics or vaccines but some strains can kill, Hoff said.

Hepatitis A, another water-borne disease which can cause epidemics, is also spreading in areas such as Aleppo and Idlib as well as in crowded shelters for displaced people in Damascus.

"This is typical when you see water and sanitation systems totally break down. Between 50 and 70 people share toilets in many shelters in Damascus," Hoff said.

Leishmaniasis, a tropical disease transmitted by sand-flies that causes skin ulcers resembling leprosy, is spreading in Syria and there are now 14,000 cases in Hassakah province in the northeast, according to the WHO.

"It is a very high number and spreading with the movement of people. Internally displaced from Aleppo have brought it to Tartous," Hoff said.

More than 850,000 are now living as refugees in Iraq, Jordan, Lebanon, Turkey and North Africa, and about 3,000 people are fleeing the country every day.

The UN says that about 70,000 people have been killed since the uprising began in March, 2011.

The UN hosted a Syria Humanitarian Forum in Geneva on Tuesday, attended by senior aid officials from UN agencies, the European Union and other humanitarian groups.

Internally displaced Syrian children climb up a wall as they collect empty boxes at a refugee camp at Azaz along the Syrian-Turkish border on February 10, 2013.