Anger at UNRWA in Gaza grows 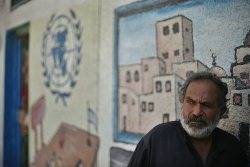 Anger and protests against the UN relief agency continue in Gaza, where Palestinians believe the agency should do more.

“It’s all so surreal to me,” 15-year-old Ala’a al Masri told Al Jazeera. “We have to try and satisfy our physical needs for vitamins and fruit by watching it on TV.”

The teenager and her family live in Al Shati Refugee Camp, one of Gaza’s poorest. Most families have lived here several generations.

Her 42-year-old father Saad al Masri is spent. His posture betrays a man who feels he can no longer meet his parental obligations. He cannot provide healthy food for his children, “Not even an apple or banana” he said.

Today his daughter asked for new shoe and pants, something for school, but the family can’t afford new clothes since they are hardly able to afford food.
The teen vented her frustration.

Stoic tears welled in his eyes. One slipped down his face as he tried to explain the situation, again: There is no work. He is one of 800,000 Palestinians - two-thirds of Gaza's population - who depend on the United Nations Relief and Works Agency (UNRWA) for help. Israel’s now 7-year siege includes a full blockade by land, sea, and air. The occupying power, with assistance from Egypt, also restricts movement into that nation. Because of this, there is no source of income for him. There is no work.

Al Masri’s family falls into the lowest income bracket and well under the International poverty line. This was not always the case. Just a few years ago he owned a factory that made clothes for the Israeli market. He employed nine tailors and the family was considered affluent.

Al Masri says the siege took all that. "No more exporting. No more access to supplies." He was forced to close his business. Today he has $17,470 in debts he is unable to pay. Once an entrepreneur and business owner, now he says he must depend upon welfare, which he says is “a humiliating reality for a self-made man.” Currently, that’s been cut too.

The UNRWA promised it would replace cash assistance with a job creation program for three months.

But this does not bring any comfort to al Masri, whose three-month payment was due a week ago, and has still not been paid.

Citing budget shortfalls, the UNRWA suspended a portion of the expected aid checks. Its headquarters was overrun in early April by angry and frustrated Palestinian aid recipients.
Protests continue, and Mo'een Abu Okal, chief of the Refugee Public Committee in Gaza says protests will not end anytime soon.

“We will continue to advocate for the rights of refugees, and we can only see the civilian protests worsening,” Abu Okal told Al Jazeera.

A member of the Geneva-based NGO Euro-Mid Observer, speaking on condition of anonymity, told Al Jazeera that he believed the UN agency should work harder to raise more funds.

“UNRWA is required to carry out its responsibility, and exert greater efforts with the international community and donor countries in order to maintain the levels of its humanitarian aid,” he said.
Established in 1949 by the United Nations’ General Assembly Resolution 302, the UNRWA is tasked with the protection of all Palestinian refugees affected by the 1947 and 1948 wars with Israel. The agency was to exist until the refugee issue was resolved following the end of the British mandate and the establishment of the state of Israel in 1948. Originally that was believed to occur within a year or two. Sixty-six years later, the issue remains unresolved; and the problem has only intensified after the 1967 war, and has been made worse with the natural growth of the Palestinian population.

As an angry crowd of Palestinians stormed the agency’s offices recently, a rising discontentment as to budgetary priorities was apparent.

Protestors held banners with various messages of outrage, calling for a “dignified life” or “UNRWA promised us house, now we can’t afford apartments rent” or, “We want to return to our Homes.”

Al Masri voiced his own opinion, accusing the current director of UNRWA operations of “failing to cut down on high administrative expenses.”

“If these budget cuts are valid, why has UNRWA hired 36 new workers for the Gaza field office," he asked. "The $78 I receive every three months for my family could be paid by deducting money from the gas spent on their large SUV’s running along Gaza’s beach.”

“Driving these gas-guzzlers just a short distance can burn up enough money to cover the needs of my home and family for four whole days,” he exclaimed.

Al Masri isn’t alone in his frustration. He says UNRWA staff enjoy access to entertainment in beach-resort communities that the majority of blockaded Gazan’s can only dream of.

Fathi Sabbah, correspondent with the London-based Al Hayat, told Al Jazeera he had advised the UNRWA to not allow its staff to use UN cars for recreation after working hours.

In the past UNRWA used buses for staff transportation. Sabbah believes this should be the policy again, and that budgets could be cut further to free up more funding to assist poverty-stricken Palestinians by employing local college graduates over higher-salaried international staff.

Phyllis Bennis, a Fellow at the Institute for Policy Studies (IPS) and author of Calling The Shots: How Washington Dominates Today’s UN, believes such frustration and outrage is reasonable.
“Palestinian outrage is absolutely understandable and justifiable," Bennis told Al Jazeera. "Their holding UNRWA responsible for the horrific conditions of their lives is understandable as well. But we must go further and look beyond UNRWA.”

Bennis stated that the UNRWA staff, which are mainly local, work incredibly hard with what they are given to work with.
In her opinion, the blame lies not with UNRWA, but in decades of Israeli occupation and sieges, and ultimately with the United States’ backing of Israel policies.

“Even though the US pays a lot of UNRWA's budget,” she stated, “It also plays a huge role in limiting what UNRWA is, and is not, allowed to do. Especially, through its domination of the United Nations, it prevents Israel from being held accountable for its violations of international law. UNRWA is not the problem. Israel and the United States are the problem.”

Nevertheless, many Palestinians disagree and believe the problems stem from the administration budget of UNRWA.

A Matter of Priorities

Robert Turner, director of UNRWA operations, recently spoke eloquently in a public meeting of the good work UNRWA has done in Palestine to improve the lives of many thousands of the poorest refugees in Gaza.

He stated that 92 per cent of the UNRWA budget is spent on local staff members.

But when asked to elaborate on how much is spent on international staff, or how much of the budget is spent on the logistics and administration of operations in Palestine, neither Turner, nor his translator seemed able or interested in providing that answer.

Al Masri said it is difficult for him, who continues to live in poverty, to get the images out of his mind of UN SUV’s, running on UN fuel, paid for by the UNRWA budget, taking UN families and senior staff to the beach for picnics, weddings in Gaza, and international staff crossing Erez - freely- for their various weekends, while the majority of Gazan’s go without basic daily needs and a decent healthy diet or medicine.

Asked how he would sum up the UNRWA situation, al Masri replied: “Think of the $15,000 wage an international staff receives. Now consider why they’re now refusing to pay $77 every three months for my entire family to live on.”

During the open meeting, when Turner discussed his visit to Saudi Arabia to sign an agreement for $42 million, funds designated to build homes for Gaza’s homeless, this news did not bring much comfort to al Masri.

“UNRWA can’t build a home for someone who can’t even afford to buy enough to eat,” he replied angrily.

A bitterly frustrated al Masri is convinced that the rising trend of self-immolation in Gaza is not too hard to believe anymore, and said, “The UNRWA ought to return us to our family home in Jaffa. Then I wouldn’t need to breathe UNRWA air and stay silent about our suffering.”

A Palestinian refugee stands outside the gate of the United Nations Relief and Works Agency (UNRWA) headquarters during a protest to demand the resumption of financial aid for refugees, in Gaza City April 22, 2013.