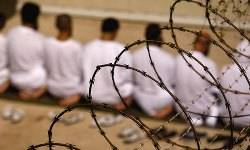 When the military doctors force-feed Guantánamo Bay detainee Fayiz al-Kandari with a tube shoved into his stomach there are three stages to the pain.

First, there is the sensation of the tube passing near his sinuses as it is pushed through his nose and into his throat, which causes his eyes to water. Then there is an intense burning and gagging sensation as it goes down the throat. Finally, when the tube enters the stomach there is a strong urge to vomit.

The experience, described by al-Kandari to his lawyer Carlos Warner, has one final grim humiliation. Once the tube has delivered food inside him, it triggers the most painful moment of all: the return of feeling hungry. "He says that can be the worst thing," Warner said.

Al-Kandari is one of at least 100 men on hunger strike at America's controversial prison camp, isolated on the island of Cuba. Of that number, whose two-month starvation protest has created headlines around the world, 21 are being force-fed to keep them alive.

Like 85 others among the 166 detainees in the camp, al-Kandari has been cleared for release but is still being held without charge. The sheer horror of many of the men's plight – imprisoned without trial for more than a decade, in many cases, and cleared but not released – has generated a wave of revulsion around the world as the hunger strike has grown in strength.

The International Red Cross has protested at the men's treatment and conditions. A group of United Nations human rights officials has demanded an end to the force-feeding, saying it is a form of torture. "Hunger strikers should be protected from all forms of coercion, even more so when this is done through force and in some cases through physical violence," the group said in a statement last week.

Rarely in the decade since Guantánamo Bay became the site of an out-of-jurisdiction prison camp during the "war on terror" has the base been featured so prominently in the headlines. The starving protesters have driven the base's existence up the US news agenda, even forcing Barack Obama to vow to shut it down. "The idea that we would still maintain forever a group of individuals who have not been tried, that is contrary to who we are. It is contrary to our interests, and needs to stop," Obama told a news conference.

There are many people who would agree with him. But it is not easy. Despite the growing pressure and despite his own stated desire to close the base, America is finding that the existence of Guantánamo and its miserable, starving protesters cannot be dealt with so easily.

Back in January 2004, an operational update by the Red Cross made an observation of the psychological impact that the concept of indefinite detention was having on the prisoners inside the camp. It revealed it had "… observed a worrying deterioration in the psychological health of a large number of them".

That was nine years ago. No wonder those still there – and still with no prospect of either release or trial – have gone on hunger strike about their fate. The Red Cross is watching the current situation closely. A source said: "The hunger strikes are a reflection of the desperation of individuals who have no clear perspective on their future. The uncertainty is what is driving this."

Yet, surprisingly, the strike did not begin specifically about such issues. Nor did it immediately involve larger numbers of detainees. Statements from prisoners passed on by their lawyers, and declassified for release by the base's military authorities, show that on 6 February there had been an intensive search of prisoners' accommodation in camp six at the base.

Inmates were ordered outside and personal items, such as letters and toothbrushes and books, were searched and sometimes confiscated. Some prisoners have maintained that their copies of the Qur'an were mishandled by the guards – an allegation strenuously denied by the military.

Whatever the exact truth, it was too much for some. Afghan detainee Obaidullah said in a statement obtained by Amnesty International: "I had not participated in hunger strikes, or organized protests in the past … but the latest actions in the camps have dehumanized me, so I have moved to take action. Eleven years of my life have been taken from me and now, by the latest actions of the authorities, they have also taken my dignity and disrespected my religion."

The hunger strike began to spread. During this time, lawyers reported that a growing number of detainees were protesting: some entirely forgoing food, some giving up nourishment to a lesser degree. The military authorities played down the problem.

In testimony to Congress in March, General John Kelly would admit only that 24 Guantánamo prisoners were on "hunger strike light" and eating "a bit, but not a lot". A handful, he confessed, were being force-fed, but they "present themselves daily, calmly, in a totally co-operative way, to be fed through a tube". Kelly even added that he suspected some of them were sneaking in snacks when they were back in their cells.

But as the headlines and also the sheer number of strikers grew, it became impossible to make light of the situation. Then on 13 April a crackdown began. In order to break the strike, guards apparently sought to enforce a policy of putting hunger strikers in individual accommodation, away from the communal parts of the camp. Some resisted and violence broke out, with the military firing so-called "non-lethal" rounds a number of times and injuring several prisoners.

Younous Chekkouri, speaking to a lawyer from the human rights charity Reprieve by phone, described how guards used teargas and "shotguns … with small [rubber] bullets" to subdue a peaceful protest after guards discovered cameras inside their cells. "Guards were scary, they were ready to use guns, use force … it was very scary," he said.

Al-Kandari also described the scene, including seeing "many" people hit by the "rubber bullets" that were used by the guards. "Everyone's hands were tied behind their back and the men were left on the floor for six hours in this position face down ... the men's clothes were soaked with pepper spray," he said in a call with his lawyer.

Now the crisis had become so bad that, amid dire warnings that someone might eventually die, a 40-strong military medical team was flown to the base at the start of last week in order to carry out the force-feedings and keep the prisoners alive.

Omar Farah, a lawyer with the New York-based Centre for Constitutional Rights, visited several detainees last week in person at the prison, including Fahd Ghazy. He was shocked at what he saw. "Fahd looked like he had lost about a quarter of his bodyweight," he said, describing other detainees whose hands were shaking from weakness and unable to perform simple tasks like lifting a bottle of water. "I was stunned by the physical ruin that I saw," he said.

One man with more than the usual qualifications to talk about what should happen to Guantánamo is Colonel Morris Davis, the former top prosecutor at the camp's military commissions. He served there for two years, seeing charges brought against the Australian militant David Hicks and Salim Hamdan, who was Osama bin Laden's driver. He is proud of his time there – although he resigned in 2007 after commanders wanted to use evidence obtained via the torture technique of waterboarding.

But Davis is now an outspoken critic of the base. "As illogical as suicide seems, sitting there for the rest of their lives probably makes it look like a rational choice," he said. Davis has now launched several petitions to get the Obama administration to close the base. But he refuses to be optimistic. "I cannot believe that we are still here in 2013 talking about this," he said.

Yet talk is still all there is. Obama himself last week acknowledged that the base was a PR disaster for the United States – there are few better recruiting tools than the knowledge that so many people are being held for so long without charge. But, even as he repeated his broken 2008 campaign pledge to close the base, Obama made clear that he would seek the support of Congress to do so.

It is the president's style to seek partnership with his Republican opponents, but that is exactly the route that saw him fail to close the base in his first year of office. Many of the Republicans, who control the House of Representatives, are implacably opposed to either releasing any of the prisoners or moving them to secure facilities on the US mainland.

It is something Davis cannot understand. "They say, 'We can't look after all these dangerous and crazy people'. But I can tell you, our prison system already looks after thousands of dangerous and crazy people just fine," he said. Indeed all major recent terror cases – from the Boston bombers of last month to the attempted Times Square car bomber of several years ago – have entered the US civilian justice system.

Obama could easily take concrete steps immediately and without the support of Republicans. Human rights activists and legal campaign groups have urged him to name a top official to tackle the problem. They say that he could lift the ban on sending prisoners cleared for release to Yemen – an American ally whose government is loudly insisting it would welcome them. That act alone would clear out scores of detainees from the prison, including al-Kandari. "The men are beyond talking. We have to resume transfers," said Farah.

But to do that Obama will have to take a risk and act alone – exposing himself to accusations of being soft on ‘terrorism’ in the wake of the Boston attack and as midterm elections loom next year. For many observers that seems like expecting Obama to take a step too far. But, even if Obama did shut down the camp, release those cleared and bring the others to a maximum-security jail in the US, what then?

Those remaining in US custody would still be being detained indefinitely without trial – a clear violation of human rights. After all, those desperate protesting men are not refusing food to simply swap the tropical air of Cuba for a chilly cell in Illinois. They want their cases processed, not just a change of the scenery glimpsed from behind bars.

And so the hunger strikers of Guantánamo will continue to starve. It seems an almost Kafkaesque piece of tragedy, mixing bureaucracy and politics in a combination that could soon prove lethal. As Warner says al-Kandari told him: "They won't try us. They won't let us live in peace, and they won't let us die in peace."

A group of detainees perform prayer at Guantanamo Bay.