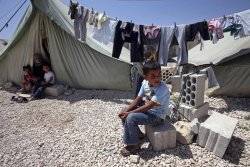 The rights of millions of refugees and migrants have been abused in the past year, Amnesty International has said in its annual report on global human rights.

The London-based rights group said on Wednesday that state authorities and employers were equally responsible for the suffering of vulnerable groups.

"The world is becoming an increasingly dangerous place" said Salil Shetty, Secretary General of Amnesty International, at a news conference to launch the report in London.

He said the world had failed Syrian people who are caught up in the spiraling conflict which has seen 4.5 million people displaced from their homes inside the country and 1.5 million living in refugee camps in neighboring countries.

"The international community has a serious responsibility here because we often have western and richer governments going into conferences and pledging, but they never support in real terms, I mean the support is never equal to the pledges they make," Shetty told Reuters news agency.

"The international community cannot just watch and continue to have more conferences and meetings without any action," he added.

Shetty said Jordan, Lebanon and Turkey cannot cope with the daily flood of refugees fleeing Syria and that European countries must step in to help, either by taking in displaced Syrians or providing more money to help fund refugee camps.

Amnesty is calling for the UN Security Council to do more to stop the war. It wants to see the Syrian conflict referred to the International Criminal Court, an asset freeze on the Syrian regime, and an arms embargo against the Syrian regime.

Britain and France are pushing for the EU to relax an arms embargo on Syrian opposition forces and on Tuesday in the United States a Senate panel voted overwhelmingly to send weapons to the opposition forces fighting Assad's government.

Several governments came under fire for their failure to protect the rights of migrant domestic workers, including Hong Kong, Jordan, Lebanon and Kuwait.

In Jordan there were reports of foreign maids being "confined to their employers' homes, denied pay, having their passports seized or being physically, psychologically or sexually abused by their employers", Amnesty said.

In Europe, Amnesty accused governments of "putting the lives of migrants and asylum-seekers at risk" with their border control operations - and warned that foreign workers face increasing hostility there because of job shortages.

"Certainly in the context of the austerity measures within Europe, I would say there has been a ratcheting up of the anti-immigration scapegoating refugees and asylum seekers," Shetty said.

A Syrian refugee boy, right, sits outside his tent next to his family at a temporary refugee camp in the eastern Lebanese town of Marj near the border with Syria, Lebanon, Monday, May 20, 2013.